Maaaaaannnn, y’all better let Dinah liiiiiive! Okay, so I had some hesitation after issue #1, but I think I’m in hook, line, and sonic scream sinker now. When you can begin your issue with Dinah destroying a troop carrier with her scream while riding on top of a moving bus on the highway, you are officially doing the damn thing. Even outside of that bit of carnage and some signature melee dominance from Dinah, the flow of this comic is beautiful. Fletcher focuses less on dialogue and exposition (although there is some) and excels on the general scripting of this issue. But that only works because Annie Wu is KILLING this book. Obviously, the identical art style leads me this way, but the storytelling itself made me feel like I was reading the “LA Woman” side of Hawkeye and that is never, ever a bad thing. 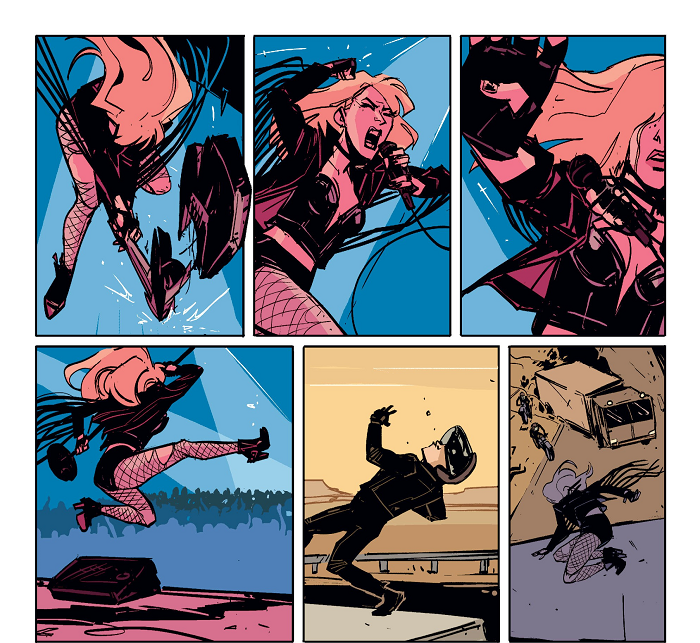 Is this a perfect issue? No. The panels and composition are so tightly knitted by interweaving the fight on the road and the concert, that sandwiched in the middle is the inevitable exposition between Dinah and her ex-husband Kurt. This definitely has potential to be fleshed out even more, but because it was different than the storytelling that surrounded it, it was hard for it to stack up. Not a lot they could’ve done about that.

Still, Black Canary is interesting, the supporting cast is getting more run, and little by little we are getting a unique backstory for Dinah. Yeah… I’m in.