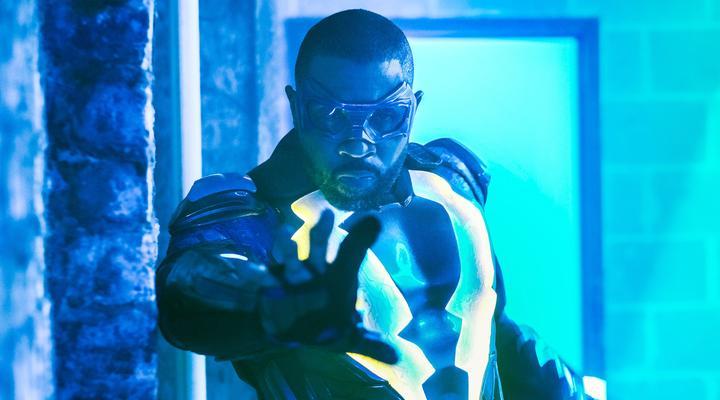 THIS DUDE FLYING LIKE IRON-MAN AND I WANNA FIGHT EVERYBODY!!

So you telling me that in all the time he was Black Lightning before, Jefferson never flew or did precision lightning bolts? Okay…

The Freeland police continue to be terrible as we drop into the middle of an arrest about to go wrong. In case you didn’t know a white officer was about to shoot an unarmed (kinda) Black boy, we linger on the drawn and aimed gun for a reeeeeeeeaaaaaal long time before Jefferson swoops in to block the bullet. Unlike the police, Jefferson only pumps enough electricity into the kid (super strong and high on Green Light) to knock him out. My man, a taser ain’t got that much juice… Then Jefferson Iron-Mans off the scene like Green Light ain’t a super drug and the FPD isn’t famous for just shootin’ niggas. 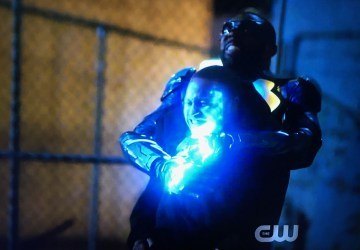 Jefferson still wants some flying practice but Tobias and his homegirl with the half bang drop by Peter’s for a “new suit” and some EXPOSITION. Turns out Tobias is really old as hell and pumped full of some serum that keeps him young (but has mysteriously ominous side effects *wiggles fingers*). I’ll be honest, I don’t know what the hell is happening in this scene or why nobody’s gotten shot yet. I do remember that half-bang homegirl is a TERRIBLE shot, so Peter might be okay regardless of how slick he starts talking. Also, who the hell is buying suits in this city? How is he staying in business?

Back at Pierce Place (turns out this is where Anissa lives) Anissa is watching YouTube conspiracy theories to figure out why she can superkick. Meanwhile, Jen is going out with Keisha, the friend who lets you get kidnapped at the club. No one sees a problem with this because no one cares about Jen. Anissa goes back to watching her video and through the magic of CW Google, she manages to find the white man talking about the exact thing she’s looking for. Wow.

Jen and Keisha hit the skating rink where, of course, Jen can’t go 5 minutes without getting into trouble. Of course, Keisha isn’t around to back up her girl. Jen has to beat some ass and maybe breaks a girl’s wrist while Keisha literally rolls up after everything is done. You need a new best friend, Jen. 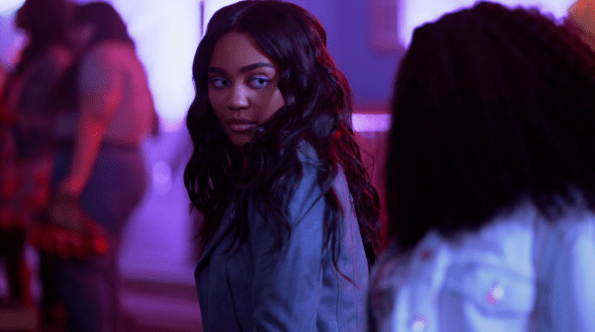 At the worst pharmacy in town, some underpaid clerk is trying to sell expired children’s fever medicine accidentally on purpose because everyone in Freeland continues to be shitty at their jobs. Jefferson buys the meds for the sick kid even though her father tries to turn it down because pride. Also, Jefferson’s lighting headaches are back with a vengeance.

Anissa, who went to the Bella Swan School of Internet Research, finds out that her murdered grandpa was about to expose whatever was going on in Freeland with the missing superpowered kids.

Jefferson pops some pills (hopefully not expired). I’m sorry, I have to go back to this. How the hell was it “store policy” to sell medicine that had been expired for three years with no returns or refunds???? That’s literally a lawsuit or at least a shut-down waiting to happen. Like what the fuck kinda place is Freeland where this is just okay??????

Anyway, Peter beeps Jefferson 911 with info about where the Green Light might be being stored so Black Lightning takes a late-night stroll. At the warehouse, he gets a shotgun pulled on him because that’s what happens when you break and enter. Things get a little racist-y before Black Lightning coaxes a name out of Old White Man with a Shotgun. It’s Joey Toledo! And we have no idea who that is.

We find out next scene though. He’s the guy who worked for the man who killed the man whose sperm helped create Jefferson. Peter’s been sitting on this information for nine years I guess and Jefferson is not pleased. Then he passes out.

Thankfully, Peter’s got a full neurology setup in his basement and Lynn on speed dial. Nobody knows what’s going on with Jefferson and his rolling blackouts (ha!) so he’s benched until further notice.

What’s Tobias Up To?

Anissa catches her father on bed rest and asks him about her grandfather and his research. Jefferson continues to be unsubtle about secrets but ends up telling her nothing. Instead, Anissa pops on down to the newspaper where her grandfather used to work to catch up with the editor-in-chief (who killed her grandfather’s stories). Did he really not expect her to ask about the last story her grandfather tried to get run before he got murdered? You been in the business for how long and didn’t see that coming?? And Anissa. CLEARLY, this story got your grandfather killed and you just searching out in the open? What is we even doing??

Black Lightning, who’s supposed to be on bed rest, pays a visit to Inspector Henderson without wearing his mask because why be good at anything this far in the game. He gives him a burner phone so they can Facetime crime tips to each other.

Lynn examines/flirts with Jefferson and reiterates that the crime Black Lightning’s trying to stop isn’t her problem. Jefferson digs this because he wants to bone his ex-wife. The doorbell rings. Turns out Jen did break homegirl’s wrist and her mothers (I’m gonna assume they’re her mothers) show up to raise hell. When Jen gets in, instead of listening to her daughter’s side of the story, Lynn throws a fit because the only thing she loves more than her Magic Twist hair sponge is overreacting. And projecting. She needs to get that under control. 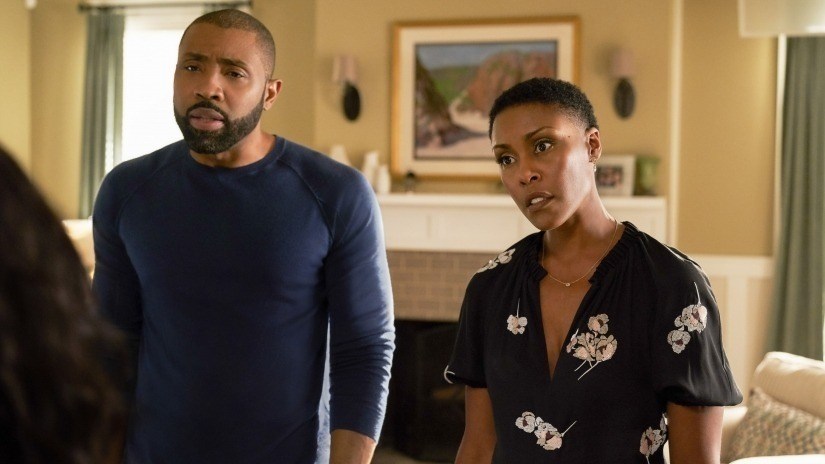 Anissa, on the other hand, can’t take a hint OR put blatant ass clues together so she shows up at the Freeland Gazette again. The EIC gives her her grandfather’s notes and tells her outright that she will die if she follows these leads. And I think she finally takes the hint.

Tobias and Tori show up at their dad’s house and he’s just as trash as always. Somehow, somewhy, dude goes in for the hug when Tobias offers it. Then Tobias breaks his back and leaves. Cold-blooded. 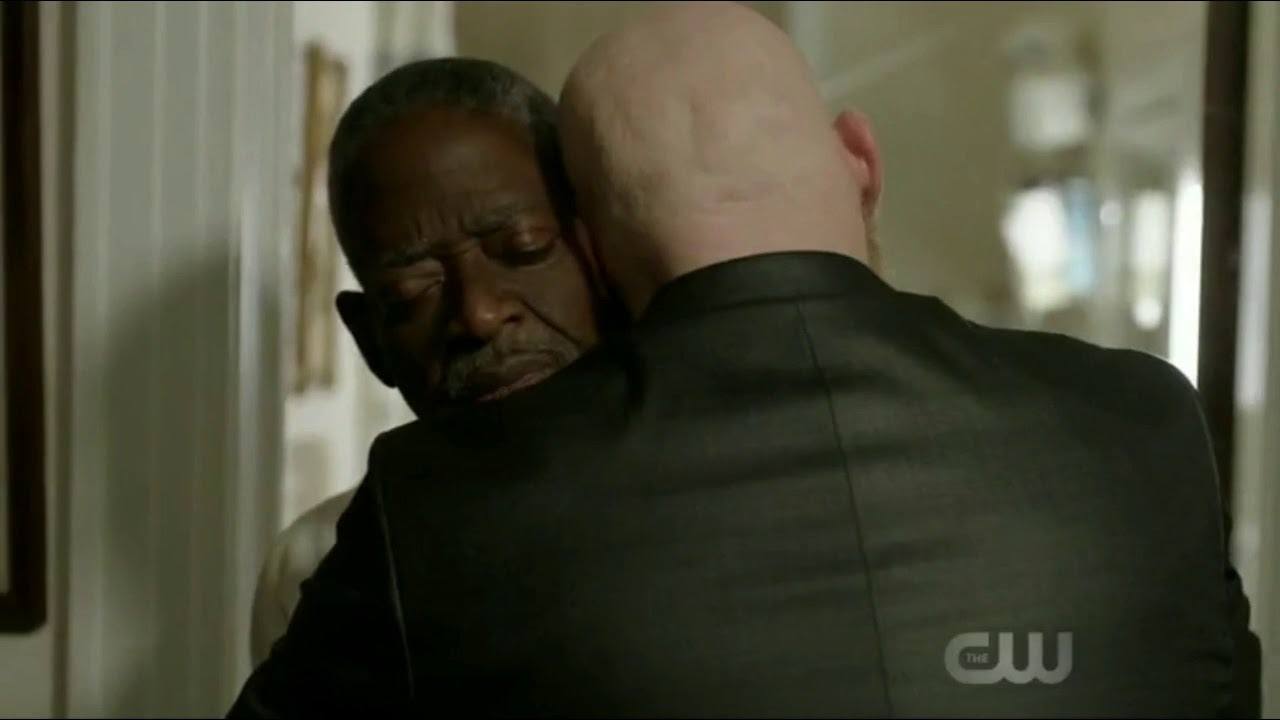 At Pierce Place, Anissa goes through her grandfather’s research and finds a key for A.S.F. She googles it and, of course, what she’s looking for is the first result on the first page. Their Adwords game must be flames to pop up that high on an acronym search. She’s finna head out because she doesn’t realize super strength does not equal invulnerability but whatever, her IG catsuit is ready for action.

Downstairs, Jen doesn’t know why she’s on punishment and honestly, girl, neither do I. Jefferson is really trying to explain to Jen how she handled herself getting jumped the wrong way. Man, you out pumping people full of volts on the daily. Y’all are the worst parents. 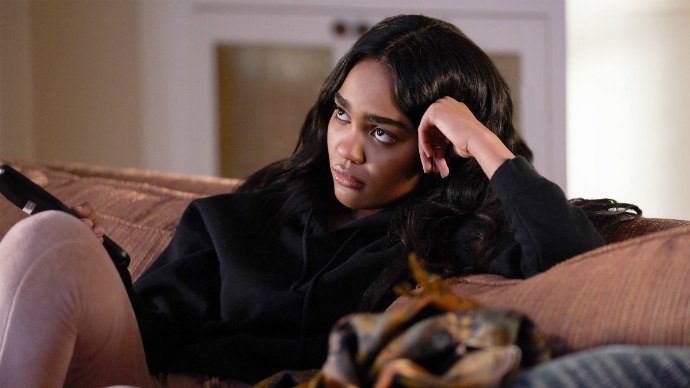 Meanwhile, Anissa is proving why PVC makes terrible heroing costumes. Once she busts out of her catsuit she hits the local…superhero outfitter…I guess? With a friendly neighborhood clerk Anissa montages her way through a series of outfits. They land on some stuff that I’m sure this dude will remember he sold to Anissa… Guess we going by the Tobey Maguire Spiderman secret identity rules. Bet.

Later, Jefferson is working the bag in some unknown shadowy place when Henderson calls with a tip. Joey Toledo’s been seen boo-lovin and now Jefferson is ready to put a bolt in his ass. Peter doesn’t want him to go out because this muhfucka keeps having blackout headaches but also there’s literally no one else fighting crime in this city.

End of Episode Cliffhanger Ahead

It’s Mail Time at Tobias’ lair and Lady Eve apparently sent him some…anthrax…? The ground-up bones of some random person with albinism? Thankfully she sent a card so let’s see what it sa…PSYCH! Next scene.

Anissa, tricked out in her bomb-ass ombre lace front and a latex outfit that is not as flexible as she thinks, shows up at the Public Storage. She breaks into her grandfather’s old unit where he kept all his evidence. I’m sorry, dead rats in a secure storage unit are actually pretty alarming. How did they get there? What killed them? They look pretty fresh so this whole rat death was pretty recent. I’m just saying… But Anissa finds a diary, a safe, and some…meth? Guess we’ll find out what that substance…PSYCH! Next scene. 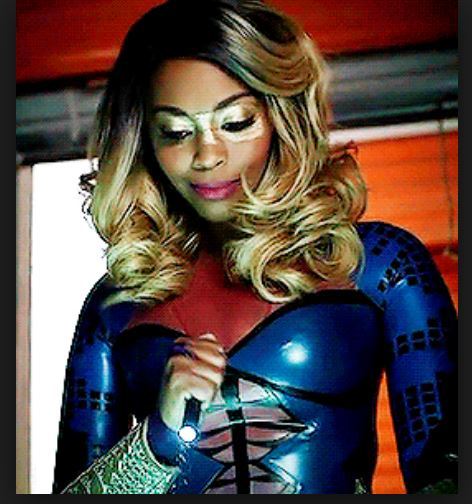 At the club, Black Lightning jacks Joey Toledo’s girlfriend for her phone and then whups Joey’s ass to the sweet strains of “The Big Payback”. On the nose music selection is on the nose. But another headache lets Joey get the jump on Black Lightning and his suit…that deflects bullets…whatever. Then he gets away.

The end, I guess…