While the war has been going for a few issues now, it finally makes its way to the front step of the Golden City and the titans we’ve seen positioning themselves against each other finally face off. As with many anticipated climaxes, the event battle and its resolution are good, but it’s hard to top such a superior run up to battle int he issues that preceded it. Which isn’t to say that some of the action set pieces weren’t great, because they were. Anytime T’Challa is in battle is a treat, but seeing the newly evolved power set for Shuri was inventive and entertaining as well. Especially seeing that she is quite powerful but not quite masterful of her new gifts just yet. As with most books that have many moving parts, everyone of import contributes this issue. From the Midnight Angels to Changmire, to paraphrase Lester Freamon, All the Pieces Matter. All of it is needed to try and protect the Golden City, even if significant losses are unavoidable. 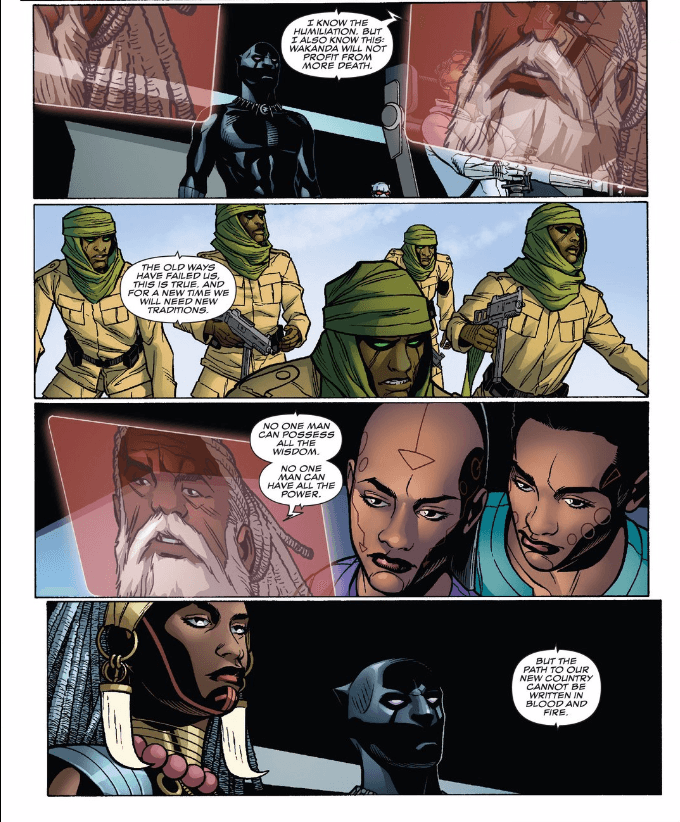 I still believe that Sprouse has been great on this book, but some characterizations lack the sharpness that Stellfreeze delivers. My biggest issue with this book is that the art often trades the close up characterizations for showing us the battle at large. For a narrative that promises the attempted conquering of a city, it was hard to get a true sense of scale of the invasion, when most panels focused on 4 to 5 characters to symbolize the war. Still, some pages are just striking as this is still a beautiful book, no matter who’s month on duty, it is.

It’s hard to top some truly great issues that came before, but Black Panther #11 still delivers a satisfying end to the physical war it’s promised since the first issue. Seeing the fallout and the fate of T’Challa in a Wakanda that must be rebuilt will be another fascinating war altogether.