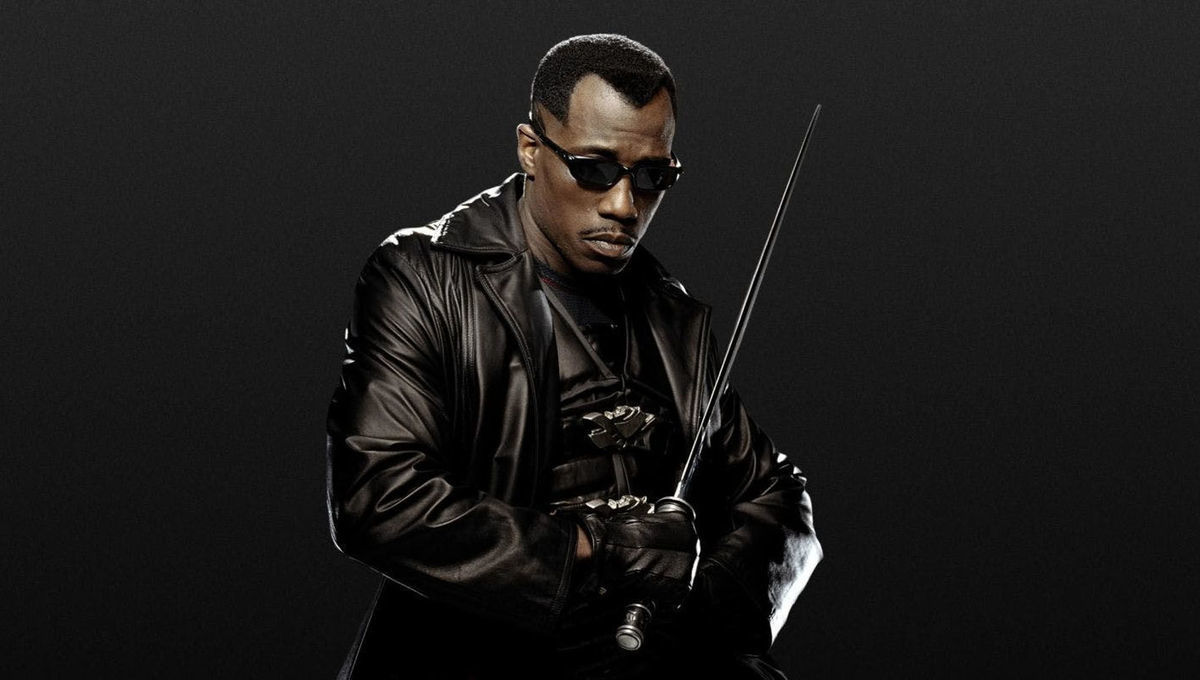 Blade was back in the nerd news last year after Wesley Snipes reported that he was in conversations with Marvel to bring the character back to the movie screen. It is widely said in my Black nerd circles that Blade (1998) was the first “modern superhero movie,” coming as it did at the end of the Batman in a Nipple Suit era and two years before the first X-Men movie. Yes, the first X-Men movie is now 15 years old. You know how old Blade is this week? 20 years old. Sit down for a while; I’ll go get your cane.

Blade, and his brother anti-hero, Spawn, were wondrously Black in attitude, but were they really the beginning of the current comic book movie era? Is our nostalgia for Blade as Black folks rooted in the quality of the movie, or is it just that — nostalgia? Blade  and Spawn both featured conflicted protagonists attempting to stand equally in two worlds. Both contain freeze frames that look like the cinematographer took the shot straight from a graphic novel. Both took themselves seriously in a way that Batman and Superman of the 1980s and 90s didn’t. There was no more “wink wink, isn’t this silly?” in the dialog or the action sequences. These movies set you up to believe in the hero, even if he was an outcast with a bad attitude. As much as Blade  is the father of superhero movies, it is itself a child of the Shaft  movies. Blade centers on a Black male vigilante and his female love interest/sidekick initially beating up street-level thugs until they fight their way up to killing the main White gangster. That’s the basic plot of every Blaxploitation movie ever made. This is a movie made for the Black viewer as well as the White, maybe that’s why so many of us like it so much.

I hadn’t seen Blade  since it came out, so I bought it for a low, low price to see for myself if it was worth the hype. In the first ten minutes of the film, we meet Blade and our damsel in distress, Dr. Karen Jensen, played by N’Bushe Wright of Dead Presidents and The Chapelle Show. Dr. Jensen is a hematologist and forensic something-or-another. She fends off the advances of her White male co-worker only to be bitten by a vampire. Blade, being preternaturally awesome, jumps in to save her. As he does, the police arrive on the scene and shoot at him. He turns to the cop and with that patented Wesley Snipes New Jack City  sneer and says “Motherfucker, are you outta yo mind?” It is a great sequence. All the elements of a post-John Woo action movie are there: The flowing black coat, the martial arts moves down a crowded hallway, the squealing heroine who somehow manages to not be completely useless, all mixed with a stereotyped “urban” edge. Despite that, it really is great movie making and great comic book scenery all at once.

Next we meet Blade’s sidekick, Whistler. Whistler is of the mechanical subclass of sidekick. He makes the weapons; Blade uses them. We also meet our antagonist, Deacon Frost, played with all the Lost Boys attitude he can muster by Stephen Dorff.

It is after Deacon Frost’s introduction that the plot starts to unravel. Who is Frost? Why is he tougher than all the “pureblood” vampires? What’s with the White woman he’s always licking when he has a beautiful Black woman in his bed? That Black woman, by the way, is Blade’s mom, played with an Oedipal creepiness by Sanaa Lathan. Lathan later goes on to play the hero in Alien vs. Predator, which earns her a spot on my Black Woman Nerd Crush list.

The end of Blade is a hot mess of a movie. Sure, Dr. Jensen beating her ex-boyfriend down with a thigh bone is fun, but the special effects are bad. There are blobs of blood that look like red finger paint dropped onto the film. There are way too many vampires, not enough blood sucking, and a samurai sword fight choreographed by people who’ve never held a samurai sword (it’s a one cut, one kill weapon, but that’s another rant.) For such a great start, the ending is disappointing from a critical perspective, but that doesn’t matter much. Some of our affection for this movie is definitely misplaced, but it’s a movie for us, for every Black Nerd who’s ever dreamed of living in two worlds without contradiction or compromise, who’s wanted to be a hero in a story set in his hometown. It is a pivotal movie, not just for superheroes but for Black Nerds — we were on the big screen and we weren’t going to leave it.

And now here we are with a Black Panther movie and intermittent rumors of a Blade IV talking-about-maybe-thinking-about being made. And Blade is back in the comic book world proper with a newly announced run featuring his daughter, Fallon Grey. Do we really need Snipes back in the black leather vest? People might disagree one way or another, but we do need to keep loving the original movie. Nostalgia or no, it foreshadowed the range of possibilities that have made comic book movies the blockbusters of our time. It was good enough to watch again, 20 years later, and really enjoy it. So much so I may have to go off and watch Blade II…

***This re-viewing is dedicated to my late friend Reggie, who introduced me to Blade so many years ago.***