This is the third and final installment in my re-viewing of the Blade trilogy, Blade, Blade II, and now Blade: Trinity. Read them all and enjoy as much as I did.

Blade: Trinity (2004) — The most maligned entry in the series, for good reason. Excuse the pun (taken from the original Blade movie), but the series had definitely gotten long in the tooth by 2004. All the amazing talent from Blade II is gone, using that movie as a stepping stone to more fertile film franchises (Hellboy, pairing del Toro and Perlman from Blade II, also came out in 2004). Wesley Snipes’ performance in this movie is so wooden he might actually be an undead vampire at this point. And Ryan Reynolds… I’ll get to Ryan Reynolds. But most significantly, the genre had sped by this original comic book movie franchise. What the streets wanted had changed. X-Men (2000) had shattered everyone’s expectations, bringing serious actors like Patrick Stewart and Ian McKellen in to give weight to the madness that is Hugh Jackman and Halle Berry in the same movie. And they had done that twice in the time it took Blade to come out with its third installment (X2: United was in 2002). Daredevil (2003) with Ben Affleck came out, but we try not to think too hard about it. Spiderman with Tobey Maguire (2002) had come out too, and it was now obvious that comic book fans didn’t have to settle for lesser known superheroes on the big screen and non-comic book fans could expect movies made about heroes they’ve actually heard of.

Into this new environment came Blade: Trinity. The movie goes poorly from the jump. Ryan Reynolds does the voiceover for the opening. Ryan Reynolds has portrayed Hannibal King, Wade Wilson (X-Men Origins: Wolverine and the upcoming Deadpool ), and Hal Jordan (Green Lantern). It is possible he’s played more DIFFERENT superheroes than anyone else. Now, I’ve distrusted voiceovers ever since I saw the director’s cut of Blade Runner, which is a whole different rant, so when Reynolds’ Hannibal King starts expository-ing, I am already annoyed. Add to that that he is given a Deadpool-light kind of character, with his dialog full of similes that don’t hang together and references that don’t refer to anything, all strung along a line of sexual innuendo and curse words, and I am really annoyed. It is almost as if the movie directors and writers are trying to make up for Blade’s lack of speaking lines by filling in ones from King. Meanwhile, Blade’s dialog is reduced even from the original movie, but instead of Blade’s silence coming off as cool and his attitude aloof, he’s just an asshole.

The movie opens with a team of vampires opening a crypt in the Middle East to find someone. This is when we meet Parker Posey as Danica Talos, who proves she may have one of the best sneers in the business. Cut scene to Blade, doing what Blade does: killing miscellaneous vampires. Only this time, he kills a human, a familiar, but a human nonetheless. This gives the FBI, under the employ of Talos and her vampires of course, the excuse they need to pick Blade up after finally killing Abraham Whistler once and for all (Gawd, I hope so). After giving the Feds his usual supply of bad attitude, Blade is rescued by Hannibal King and Abigail Whistler, played by Jessica Biel. Is that Whistler as in Blade’s now-dead sidekick Whistler? But of course it is. As Abigail explains, she’s not one of his original daughters, who are dead according to the first movie, but a third child, born to another unnamed woman. Blade, King, and Whistler evade the police with ease, with time left to spare enough that Blade goes back into the building for his sword, providing one of the best Iron Man pose shots of all time.

The threesome goes to their hideout, where Blade meets the rest of the crew, an independent cell of vampire hunters going by the name Nightstalkers. Blade then delivers a random critique of the crew that has such a slightly insane quality that I was left wondering if Snipes had gone off script and just started rambling while the cameras used up film. But the Nightstalkers know far more than Blade does and they fill him in on who those vampires in the first scene were looking for: Dracula himself, the first vampire, now called Drake. Not only is his name that of a 90s frat boy, that’s also his style, with the same exaggerated swagger, ill-fitting clothes, and fake ethnic jewelry.


[divider type=”space_thin”]
Knowing the plot now, Blade agrees to work with the Nightstalkers to find Drake. Meanwhile, Drake takes a hilarious tour through a goth vampire shop that is worth the fact that it has nothing to do with the rest of the movie. Eventually Blade and the Nightstalkers find Drake, leading to a long chase scene that ends with a face off between Blade and Drake. This is the point where the movie could have redeemed itself with one of those fights that illustrates the respective strengths of the protagonist and antagonist and provides some hint that maybe, just maybe the hero won’t overcome. But that doesn’t happen. Instead, Drake and Blade talk fake masculine philosophy at each other over a baby, which sounds like the basic plot of many bromances.

The dialog overall is horrible in this third movie. It is neither witty, nor interesting, nor even comic book corny. It is just pointlessly bad and poorly timed. Interjected into the bad dialog from Blade and the pointless ranting of King, there’s Talos’ yelling and the growling of her sidekick: Jarko Grimwood, the inimitable Triple H. I will say, he has the best scene with a vampire Pomeranian that you could even imagine. Yes, I said vampire Pomeranian. Knowing the little bastards want to suck your blood explains a lot, doesn’t it? 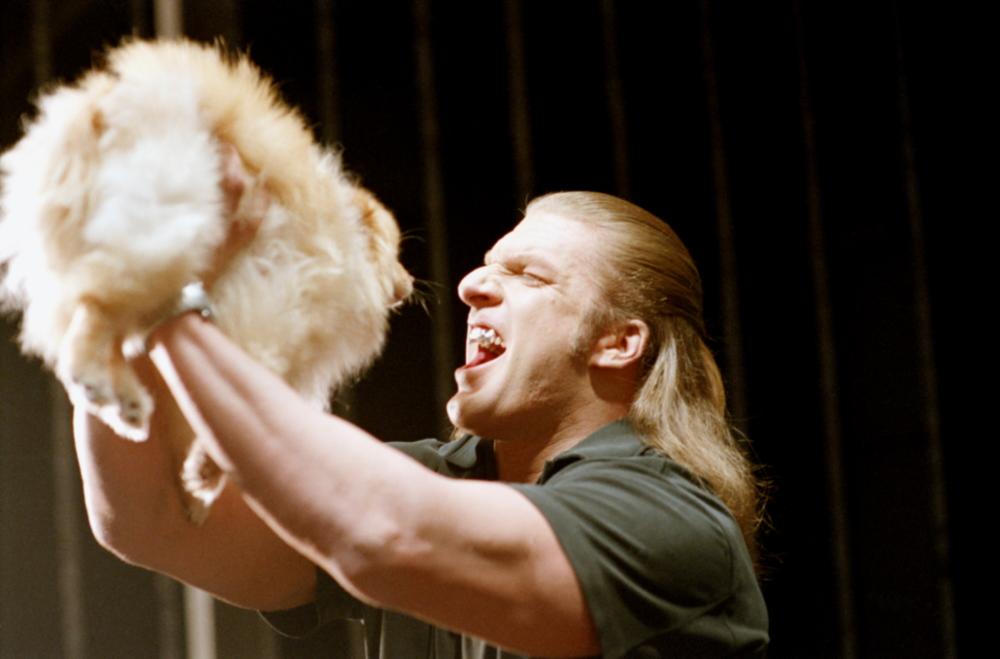 It is all such a mess that by the time the Nightstalkers find what the vampires are really hiding, a body farm where they keep humans alive to harvest their blood, I didn’t even care. There’s some needless tension introduced by Drake kidnapping the child of the Nightstalkers’ scientist — who brings a kid along on vampire hunting trips? — and our friend King is kidnapped as well. Blade and Girl Whistler do the usual girding of the loins montage and exchange one more meaningful bit of non-dialog: the famous “Use it!” scene:

Jessica Biel is actually the best thing about this movie, sorry Omar it has to be said. Her acting is on-par with action films of the time, she emotes just enough to be interesting, and doesn’t fall into damsel in distress mode. She just kicks ass and burns vampires and that’s pretty awesome. But to enjoy Abigail Whistler show Katniss Everdeen how they do it downtown, we have to sit thru more Hannibal King and Talos mock-flirting, again filled with dick jokes and bloody threats. Maybe this was all edgy back then…no, I don’t think it was then either.

The movie then finally gets to the big fight scene, which starts with this perfect exchange:
Drake: Blade, ready to die. (Notice that’s not a question mark. Mostly because no one in this movie knows how to inflect for shit.)
Blade, unsheathes his sword and cracks his neck: I was born ready, motherfucka.
Cross swords! Fight!

This big fight scene is quite good, as are most of the ones in the movie. It is fast, with plenty of acrobatics and flash. But in the end, Drake is defeated by science when Blade infects him with the antidote for vampirism or some such, and he and all his kin fall to dust. In the end, we’re left not knowing what happened to Blade, only that the thirst continues and that the war never ends.

So here we are in 2015. What are we to think of the three-some? It is a classic set that never fails to entertain, even when you’re laughing at the bad acting as you’re being awed by the jumps and flips. The original ages well and could easily be considered one of the best comic book movies yet made. The middle one is a must-watch, if only so you can win at movie trivia nights. The last one? It left me feeling satisfied, but also well convinced that I never need to see another Blade movie again, despite all of Wesley Snipes insistence to the contrary. Once Black Panther comes out in a few years, will Blade fade even further back into our memories? Like other classics, we’ll remember the best parts and let the worst ones fade. In the case of Blade: Trinity, the best and worst parts are one and the same.