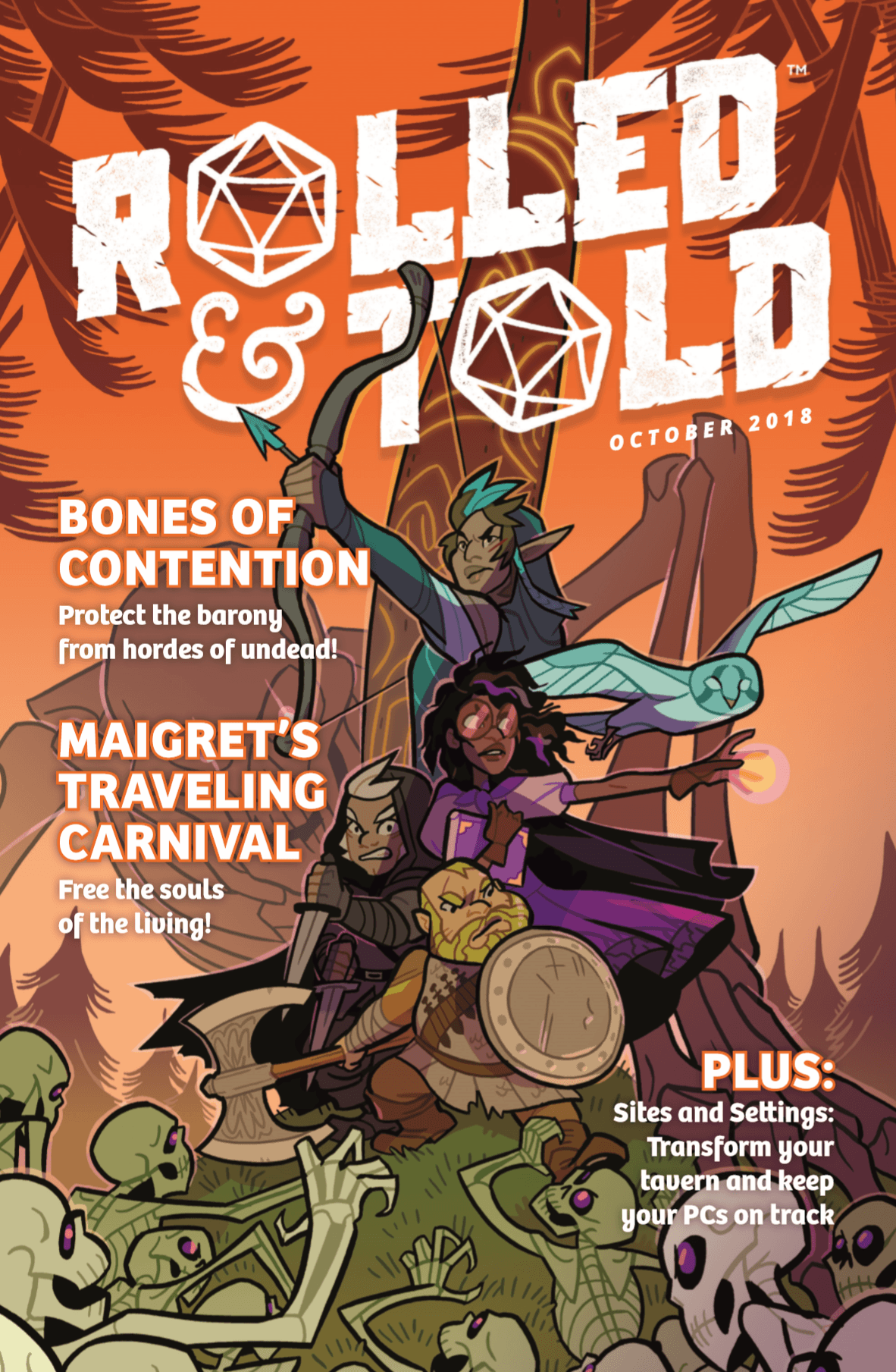 After reviewing Rolled & Told #0 and #1, I wanted to do something different for Rolled & Told #2. For those of you who need a refresher, the monthly magazine from Lion Forge’s Quillion Imprint are pre-made adventures made for Dungeons and Dragons 5th Edition that serve as introductory campaigns for players and dungeon masters of all experiences. Rolled & Told has been the basis for my tabletop group’s D&D campaign since #0 and with their permission, I recorded the events of our ragtag bunch of misfits as we dealt with the… BONES OF CONTENTION! *cue spooky music*

While Rolled & Told does offer pre-made characters in addition to the campaign, each of us had prior tabletop experience and wanted to personalize our characters, leaving us with the following:

***One final note: This recap contains spoilers for Rolled & Told #2. If you were planning to read it yourself, now may be the time to stop reading.***

During our last session, we had successfully conquered the Thunderkeep Barcrawl and had established ourselves as somewhat capable adventures. To start off this campaign, our DM informed us that I, Parola, had received a letter from a fellow priest of Onos (in a nice bit of collaborative worldbuilding), Brother Hovis. 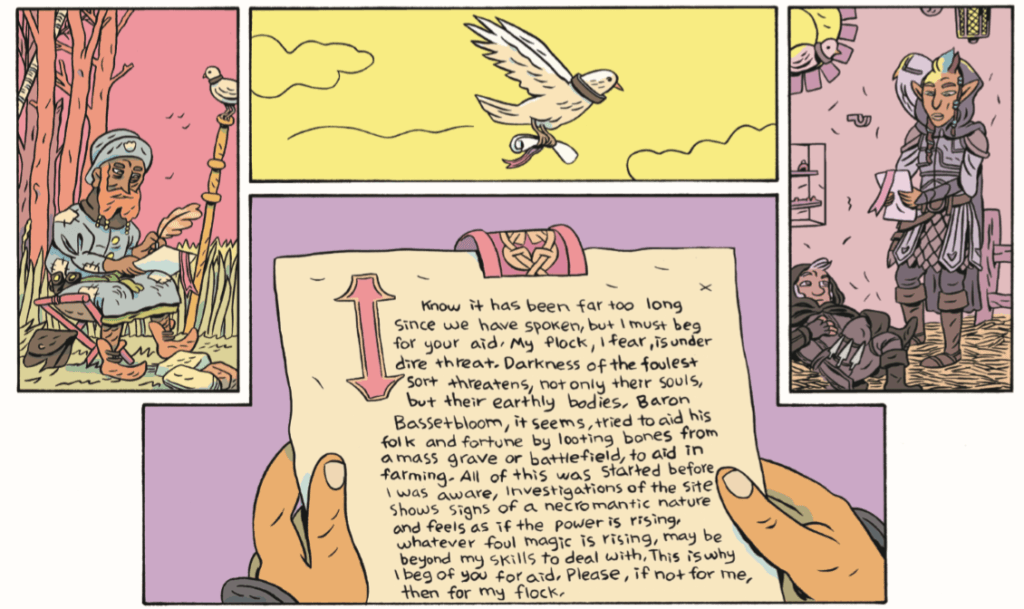 The Barony of Bassetbloom had apparently been going through a rough time after the crops were overtilled. Barony was an older man, mostly kind but did not always think things through. In order to try and get the barony back on track, he got some bones from a nearby battlefield to be ground up and used for fertilizer. However, Hovis’ letter revealed that Barony of Bassetbloom’s bad bonemeal bread (Onos, do I love alliteration) has made everyone sick, and Hovis needed help to figure out if there’s a cure for such an ailment. 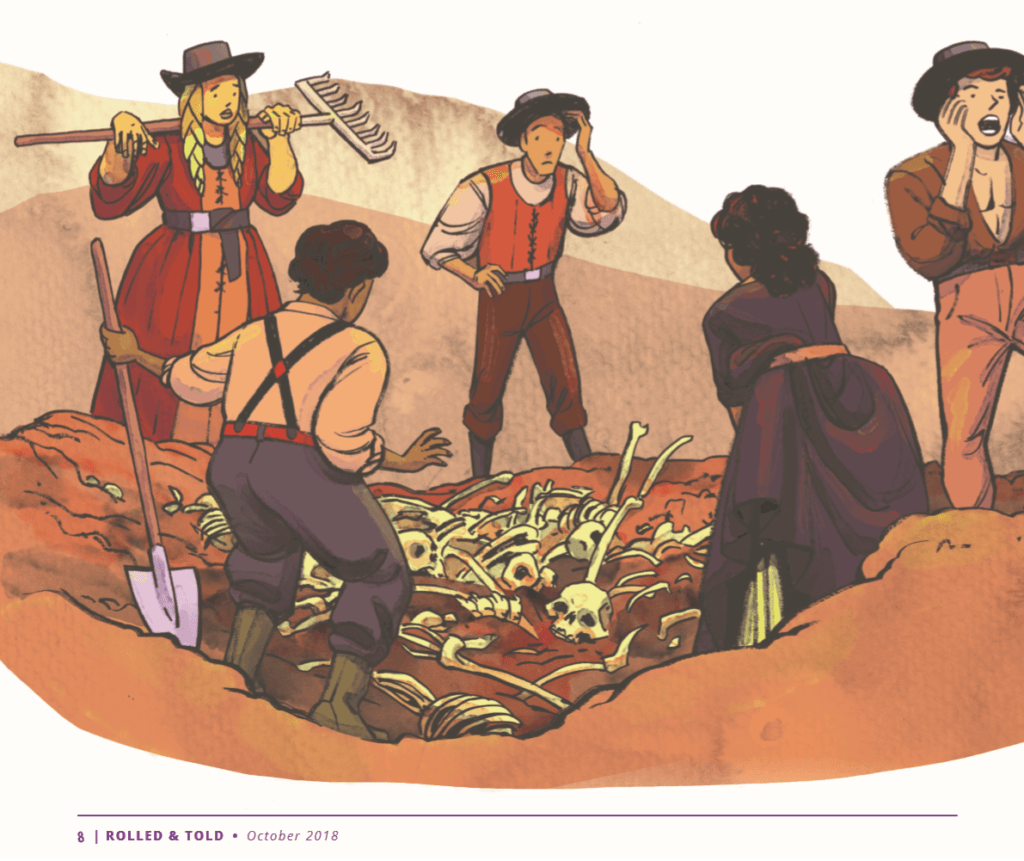 Now, our crew is generally good willed so we all agreed to help out. We got into a nice little covered wagon and made our way to the small secluded village. As we traveled north, before we entered the village we were greeted by Brother Hovis, who is a human that matches Parola in height, although he was very sickly. He provided more details about the bad bread, when our lizardfolk Isk asked, “Have you considered eating each other?” A sentence that rightfully disturbed Hovis. However, before such a statement could be dissected, the sound of a loud bell and a deep horn echoed. Hovis informed us that it is the town alarm, and something must be happening. Knowing that this all started with the battlefield where the bones were originally buried, we made a b-line to it, only to encounter 7 skeletons in the field we were cutting across (Field 5 on the map, for reference).

As the team worked through the miniature horde through various means, including Dae the Warlock using eldritch magic to clear out three of them leading Parola to advise, “Brother Hovis, cover his eyes!” During the skirmish, each defeated skeleton turned to dust and blinded those close enough and unlucky enough in their dice rolls. In the distance, we saw guards doing their best to fend against the skeletons.

As more skeletons rose from the field, the team realized that we needed to solve the mystery faster and continued to make haste towards the battlefield, stopping momentarily at the center of town. Hovis, assured that the team could handle the mystery, began trying to rally the townsfolk into the fortified feast hall. Parola stayed behind to help herald everyone inside.

Meanwhile, the rest of the team began to multitask. Mailae, Cobble, and Isk worked together to destroy some of the bonemeal and original bones to prevent things from getting even more out of hand. Dae noticed a small child run off and tries to confront him. The child was hiding some object, and Dae tried using various disguises to talk to the child including Brother Hovis (while the real Hovis was within visual distance), claiming to be an angel and just his own warlock self to minimal effect. In response, the child claimed, “I’m not the brightest crayon in the toolbox, but I don’t know you so I’m not gonna tell you anything.” Meanwhile, Mailae turned into a horse to move around the village faster and lead the charge to the battlefield.

The child ran back to talk to the real Brother Hovis after being accosted by Dae, who has now resumed his journey back to the battlefield while sending his familiar, Meowjima, to follow the child. Brother Hovis identifies the child as Gibbon, who reveals a rune carved in an adamantium sphere. At this point, I get to roleplay both Parola and Hovis giving exposition. After a history roll, I am reminded that the rune was in an ancient spell language used by the ancient Zingina, the Matron of Bones, who was working on creating a personal necromantic army by stashing bodies in caches across the area. Meowjima, hearing all of this, informed Dae who then asked Parola (through the demonic cat) for the rune, to which Parola acquiesced. 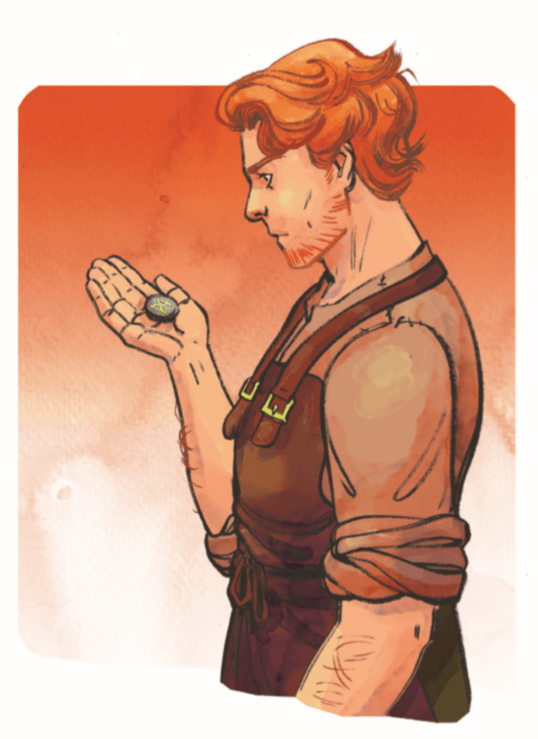 The rest of the team finally got to the battlefield. An inspection revealed that while there were lots of corpses the fighting did not occur here and given how shallow the graves were, they were moved here which corroborated what Parola knew. The battlefield also contained spooky skeletons and magical obelisks in a mystic array. After receiving the missing rune, Dae sent Meowjima back to try and aid Parola while the rest the team faced orc skeletons rising from the ground. However, Parola, having only successfully gotten about 15 villagers into the feast hall, entered with Brother Hovis only to hear the buckling of the structure as skeletons, led by the skeletized guards who were succumbed to the dark forces, started piling in with no help was in sight.

What followed were two simultaneous battle sequences. As Dae, Isk, Cobble, and Mailae fought the orc bones while desperately trying to fix the magical array, Parola fought wave after wave of zombies. As a level 4 cleric of the Tempest, he did not have access to Destroy Undead, having to rely on the Wrath of the Storm and various spells to clear out skeletons while Brother Hovis picked off stragglers with a crossbow.

Meanwhile at the battlefield, Isk, Cobble, and Mailae valiantly fought the masses of skeletons, although the crowded nature of close quarters combat did lead to the following memorable quote from the DM: “I don’t understand why you being a horse makes you less susceptible to archery.” 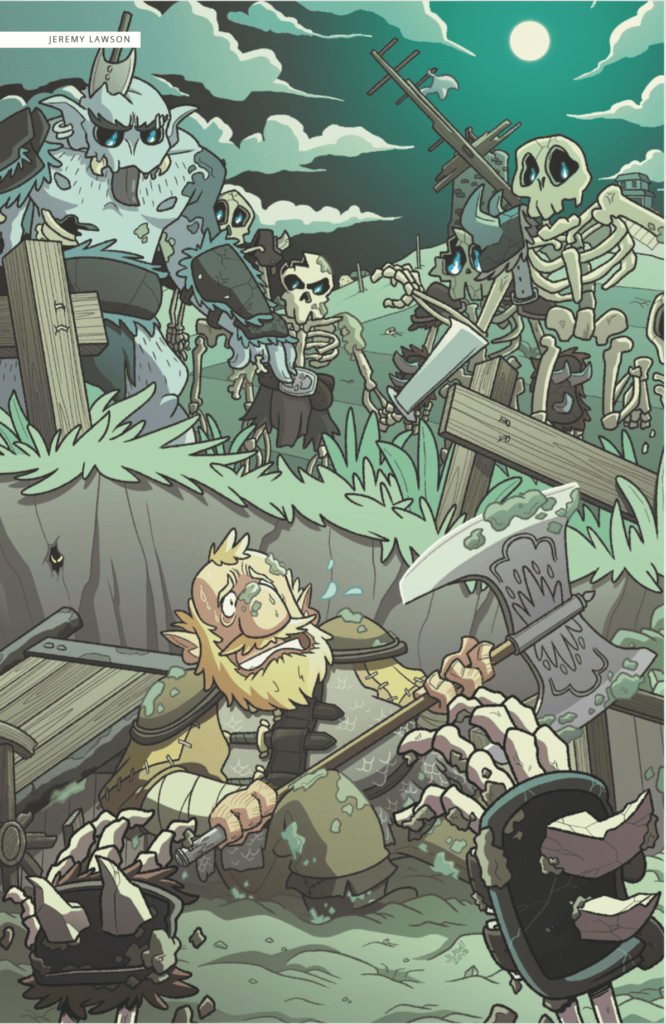 Thankfully, before either scene gets overrun, Dae arcana’d his way to re-affix the rune to the obelisk and seals the curse. The skeletons fade away to dust, and while many died, the team saved what remained. And it was Parola who somehow managed to rack up the highest body count with over 20 skeletons struck down by Onos’ lightning in defense of the 15 villagers. And while many were lost, the Barony stood standing.

In summation, Rolled & Told #2 was a combat heavy session with plenty of roleplaying and puzzles that gave us a challenge managing the hordes of skeletons and ancient magic. Each of us got to live out a unique power fantasy, and having my walking Lighthouse casting lightning spells at skeletons to protect a fellow priest’s flock is pretty much my aesthetic. And to reiterate, if you want to get into D&D, Rolled & Told is a great way to do it.