Welcome to the next spooky scary entry in our spooky scary SpookMonth. This time we have a 12-episode anime series called Another. Another is a horror-mystery anime from 2012, AKA the year that everyone thought the world was gonna end, but we all know the world can’t end until the Deadpool movie is released. This one also has blood and some disturbing stuff in it, so viewer discretion is advised.

To properly explain the story of Another let’s go back to the beginning. In 1972, a student of Yomiyama North Middle School’s class died unexpectedly. It was an extreme tragedy, but for some reason all the students and teachers still acted like the student was alive, and even left a seat for the student on graduation day. One student even stated “Misaki isn’t dead, she’s right here,” and pointed at the her desk. On the graduation photo the student can be seen even though they were deceased.

Fast forward to 1998 when Kōichi Sakakibara transfers to a new class and meets a girl with an eye-patch. For some reason the students don’t seem to notice the girl even though Kōichi can clearly see and interact with her. Soon after he transfers, a deadly phenomenon strikes the class and their relatives as they begin to die in gruesome ways, one by one. Kōichi has to find a way to stop the phenomenon before it kills him and everyone he cares about. 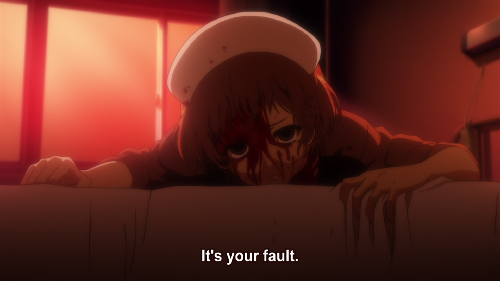 The animation is unique and at first you might feel like it doesn’t fit but soon you’ll realize why it’s the way it is. The way the characters are animated makes each scene more memorable, and the creepy atmosphere and silent moments create tension that you’ll come to appreciate by the time the series is over. The story places the characters in life or death situations, and every character’s emotion is shown to create a perfect package.

Another‘s story is just as much of a mystery as it is horror. The way the episodes play out as you delve deeper into the world feels genuine and extremely creepy at the same time. This show isn’t for everyone, but if you enjoy being spooked by the atmosphere and the music rather than jump scares then this one’s for you. There is blood, and some of the deaths can get a little extreme, so just be warned. Another is one of the best horror anime to come out in recent years and it’s a building blocks to having a spectacular SpookMonth. Just don’t forget to watch it alone in the dark for the full effect.