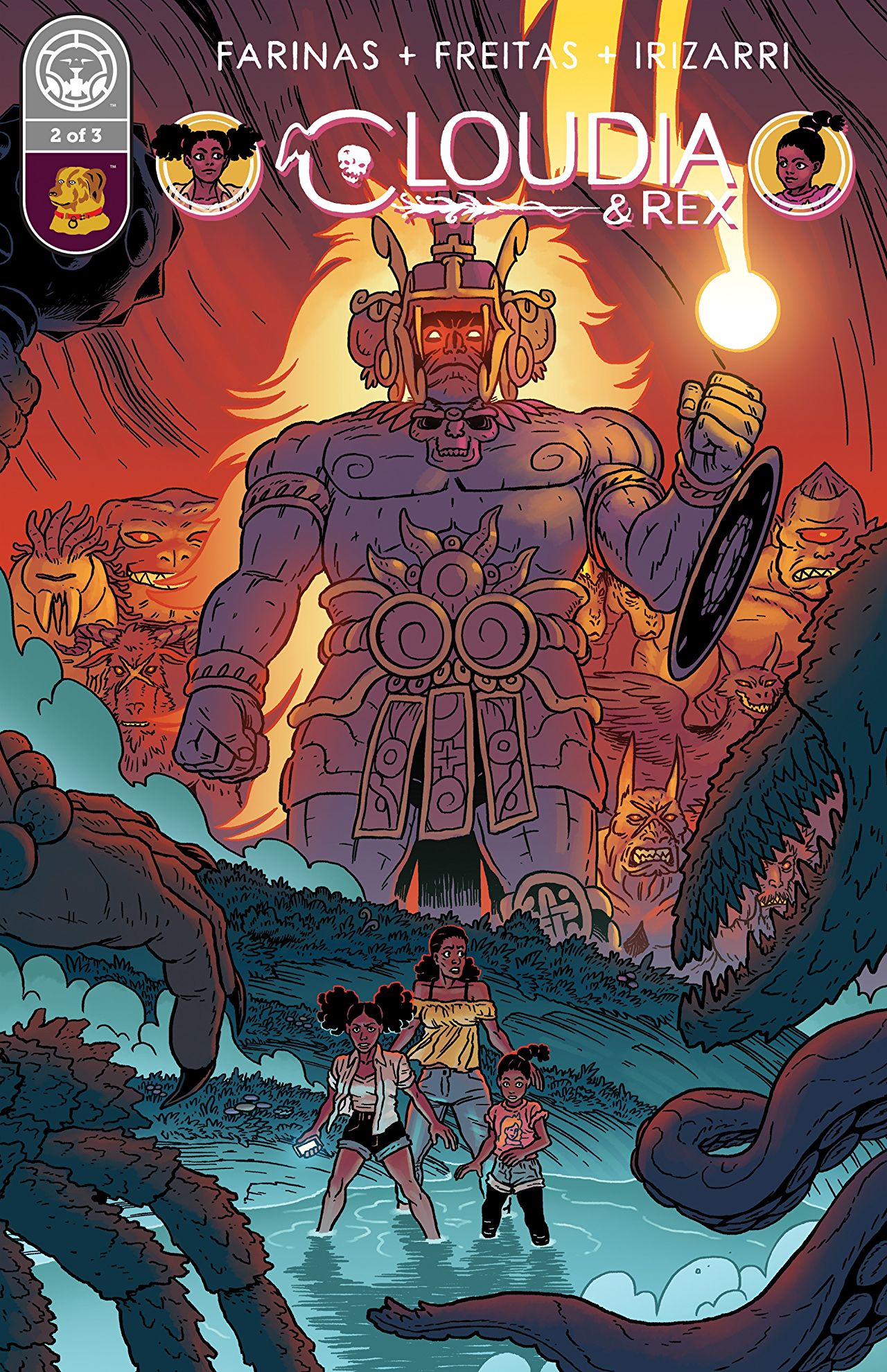 Back in July, I raved about the first issue of Cloudia & Rex. It featured a family dealing with grief, gorgeous art, and perhaps most importantly to me, at least, a black girl somehow finding herself with the power of a thousand gods yet also responsible for their impending doom or their salvation…

Cloudia, with the fugitive gods, fleeing the High Waveform dominating their home plane in tow, is looking for her fam. Things aren’t peachy though as one disgruntled God, a warrior God by the name of Tohil, is out hunting for her, wanting to put a stop to her mission to save the other Gods. He makes a rather impressive performance later at the end of this issue that made me stop for a moment. The art stays dreamy and whimsically colored–it’s a real treat that I can’t get enough of. Animals of all shapes and sizes pop up in panels and there are some closer looks at a few Gods themselves (but not enough!) Also: I’m really fond of the God of Death’s look and design) (Here’s an interview with the creative team which touches upon all the various representations of the Gods throughout the comics)

What really ties this book together is familial bonds and survival: Cloudia has agreed to this whole ordeal to save her family, to keep them safe. Even she knows she’s been distant and moody (AND A BRAT!) and has stepped on toes in this awful wake of her father’s death that has impacted her family and forever changed them. She may not totally understand realms greater than her own or and can fully comprehend lifetimes that never end but she knows that all she really has is her family now: her mom and her sister Rex.

In the same breath, all the Gods want is for most of them to make it–to survive. In a way: all they’ve had were each other this whole time. To rely on someone else who, before this whole ordeal that is affecting their home, couldn’t mean much to them in relating to any of their struggles is a testament in conflict and it serves them well in this book. The Gods are working together as a unit to make it work just as Rex and Mom are working on finding the missing Cloudia.

I won’t lie, this is a fast paced issue of this mini-series. This shouldn’t deter you from reading it though. Honestly, this makes me curious and hyped as I’m super looking forward to how the creative team pulls off the third and final issue of this mini-series. I know this series is written and marketed to a young adult audience (ages 14 and up) but it’s pulling at all my heart strings here. I’m here to see how this ends.