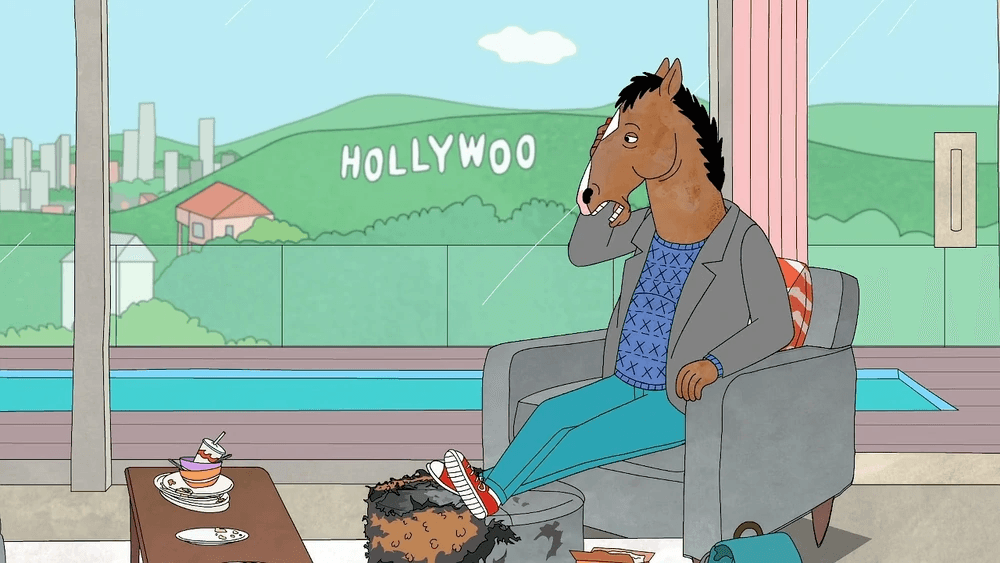 I finished watching BoJack Horseman Season 6, Part 1 and reading Raphael Bob-Waksberg’s Someone Who Will Love You in All your Damaged Glory: Bang-Your-Knee, Bust-Your-Heart-Open Love Stories within a day of each other. This was not by design.  Netflix executives had a convoluted rollout strategy. My friend said that this book might help with all of my neuroses when it comes to dating. I’ve been trying not to be a projection of all my self-doubts and rather a more honest version of myself. Which is to say, what happened next was just the natural consequence of the timing of my life at this particular juncture. 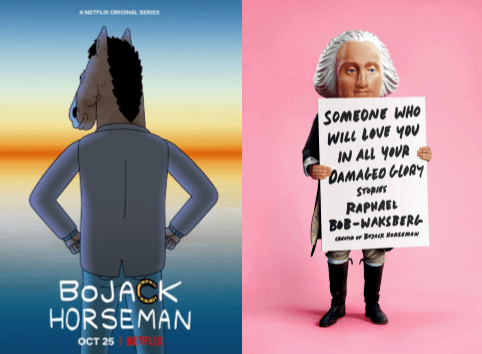 Sometimes, the universe just syncs things up in just the right way and all you can really do is laugh. I laughed a lot between those two days. A sly smirk. A quiet chuckle. A full bellied laugh. A sharp exhale as though I had been punched in the gut leaving me without any air. This is the best lexicon I have for describing my initial reactions to absurdity. Absurdity is the best way to describe a world where the US government has passed a law that lets billionaires literally kill people without consequences, where gun control was handled in a matter of days after women started exercising their 2nd amendment right, where the governor of California was determined by a ski race. Absurdity is the best way to describe situations like how many goats to sacrifice at a wedding, staying on a train for sixty years trying to get the courage to talk to someone, or forming a superhero team where all of your powers are alcohol-induced.

It sounds ridiculous doesn’t it? But there’s always that sinking feeling in the back of my head retorting, “but is it really? Haven’t I seen that before? Haven’t I almost done the same thing before?” I’ve historically had a tendency to freeze up when face with the absurdity of life, but I’ve been trying to react a little more boldly.

As such, to me, BoJack Horseman is not a mirror but a kaleidoscope… or maybe a shattered beer bottle that’s been pieced back together. I’ve never seen myself in full watching the show, just snippets of my life filtered through the opposite of a rose-tint. I hear a bit of dialog and snap back to a memory of equal magnitude of absurdity right on cue. I’m not completely convinced that I’ve been a good person all my life, so I’ve been trying to make sure to stay on the up and up. Like the cast of BoJack, I am trying to shed myself of my unsavory flaws. It’s just always funny to me how applicable “every action has an equal and opposite reaction” is to all aspects of my life.

Note: Every story I tell here is true insofar as any story can be true. Also, BoJack Horseman spoilers for all the seasons.

Sometimes, it’s minor. Season 5, Flip McVicker accidentally forgetting to finish INT. SUB while writing a script, and I think about the millions of typos I’ve made on essays and tweets that have cost me letter grades and some minor embarrassments. But then it quickly escalates.

Season 4, Todd tells BoJack, “You need to be better,” and I’m thinking that I have whispered that to myself every New Year’s as my resolution since 2014.

1. I just need to try and be better than who I was yesterday.

Season 1, BoJack asks Diane, “Do you think it’s too late for me?” And I’m thinking about the time a friend asked me in earnest “Do you think I’m too fucked up to be loved?” as if this was the most casual question to be asked. And I somehow struggle to produce the best summation of “No, of course not. You’re not fucked up. You’re human and fallible and for as long as I’ve known you you’ve never hurt anyone.” It’s the inverted struggle of Diane’s silence, although the results look similar.

Season 6, Guy claims to refuse to make a declaration asking Diane to stay in Chicago and I’m suddenly staring at a way too long series of texts from 2017 where I was so ready to be the one to move across the country to be with someone (She never responded. This was a mistake entirely on me.). Later, Guy asks Diane to listen to her doctor to take antidepressants, and I’m counting the times I’ve shouted “med compliance is important” even though I’ve never had to take meds stronger than a pill for my allergies but I’ve witness what happens to my non-compliant friends. I’ve heard blazing sirens, “but I feel fine now” like there isn’t a direct cause and effect in play.

Sesaon 6 (again. It’s crystal clear in my mind for some reason/s), BoJack refuses to call Princess Caroline knowing that she is busy, and I wonder how many times I’ve done the same. Isolated myself from people for far less drastic reasons. And I recognize bits and pieces of myself, and it’s a reminder that we are more than capable of evolving.

Moments of clarity in stretches of absurdity. Grandiose displays punctuated by simple truths. Like the world of Hollywoo is not so removed from our own reality to call it separate. I mean, really. What’s the difference between being ignored in New York and being underwater? 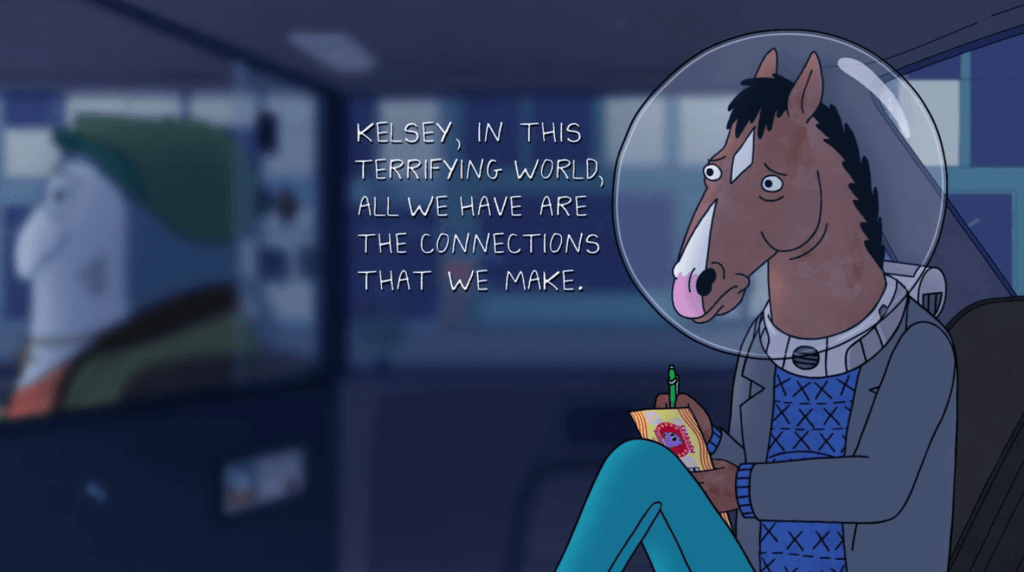 Earlier this month, a friend tells me “I don’t actually know a lot about you. Or rather, I know a lot about a small part of you.” She then proceeds to completely breakdown my entire personality with a scary ease. And it’s a familiar sequence.

You’re probably not direct with people. You leave hints and clues and hope they notice. / A quiet chuckle.

You’re scared of telling your friends the truth. / A full bellied laugh.

You’ve been hurt before haven’t you? /  A sharp exhale as though I had been punched in the gut leaving me without any air.

And there’s a shade of veracity in their assertion. More than once I’ve called myself a coward, but more than once I’ve gotten over that fear. Here’s the thing: however absurd fiction is, our lives are equally absurd. However bombastic and extraordinary circumstances of the cast of BoJack Horseman are, it’s not like our lives are any less bizarre. If you were to be on the other side of the beer-bottled kaleidoscope, would it really be that unfamiliar? Doesn’t it cut deep because it’s supposed to? Doesn’t it cut deep because it is a shard of glass? 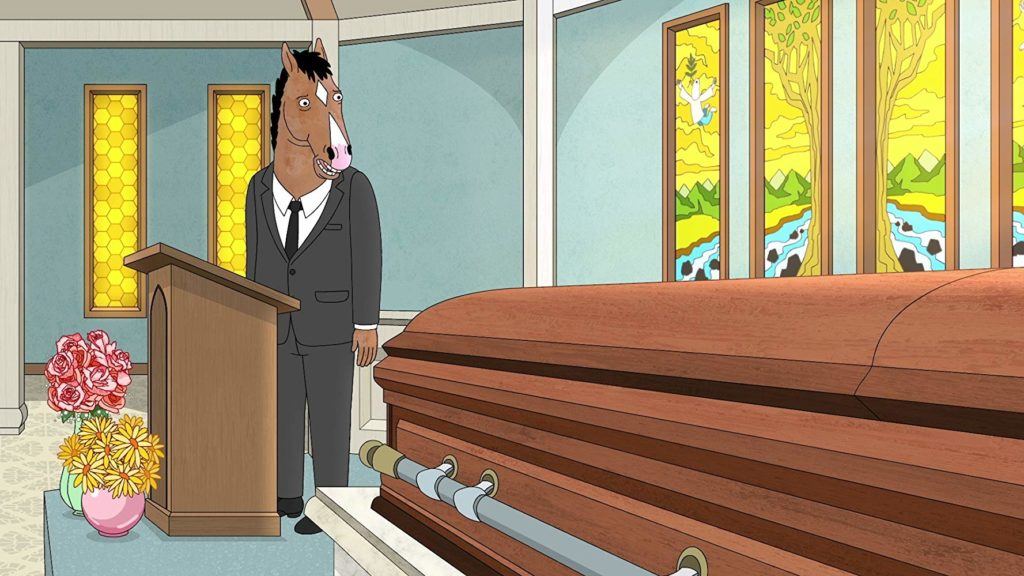 Now that I’ve finished watching BoJack Horseman Season 6, Part 1 and reading Raphael Bob-Waksberg’s Someone Who Will Love You in All your Damaged Glory: Bang-Your-Knee, Bust-Your-Heart-Open Love Stories, I laughed until it hurt because it did hurt. But in the recovery, there was a simple takeaway.

Change is scary, but we are meant to change. Our lives are absurd but we can still be better to each other and ourselves. It’s not too late for us. It’s gonna take forever, but I really do believe that with enough effort and actual self-reflection, it’s not too late for us. We can learn to become less projections of self-doubt and more of our honest selves. It’s gonna hurt, but when face with the absurdity of literally everything in 2019… it doesn’t sound too bad to try and be happy does it?