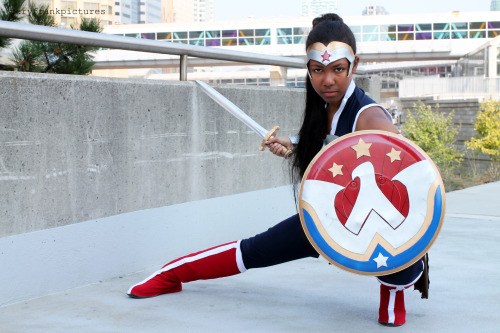 I first came across Alanna’s photos of her in Wonder Woman cosplay not too long ago and was inspired to seek her out. She’s muti-talented as she is not only a cosplayer but a filmmaker, photographer and fellow artist. She cosplays some fierce ladies and puts a unique twists on others (see her Human!Blue cosplay—that cheeky little velociraptor from Jurassic World) She just may have become my favorite Canadian—sorry Logan.

BNP:  Please tell us a little about yourself.

Alanna Mode: My name is Alanna – aka Alanna Mode – and I’m a cosplayer based in the Greater Toronto Area in Canada. I’m a budding film director and editor, currently finishing my degree as a film student. I’m also part of the writing team at The Geek Chic Elite, and in my spare time I try to squeeze in things like practicing music, crafting, and of course cosplay.

BNP: First things first: that fabulous Wonder Woman cosplay! As beloved and iconic as Diana is-what drew you to cosplay as her? What is it about Wonder Woman that is inspiring to you as a woman, as a nerd, as a cosplayer? 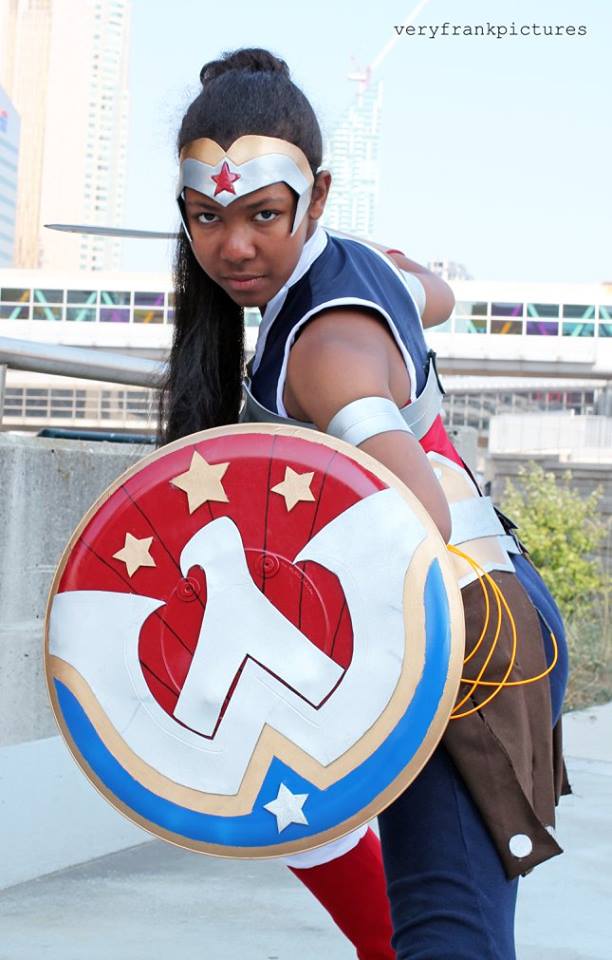 Alanna M: It’s funny actually – I’ve never been the biggest fan of Wonder Woman, and it was only through this cosplay that I really came to appreciate her character. I honestly was drawn to cosplay as Diana because of Jamal’s fantastic redesign. I realized her classic ‘bathing suit’ style costume was the thing I really had issue with, not her character. She’s muscular and strong and yet still feminine, and while she’s a fierce fighter she doesn’t seek conflict like some of her fellow Justice Leaguers. One of my favourite Diana quotes is “do not mistake a desire to avoid violence for the inability to deal it”. Wonder Woman does carry a certain icon status, and it’s been so interesting to see people’s reaction to my cosplay, especially other women of colour.

BNP: Also I’m so happy to see that your WW cosplay was inspired by Jamal Campbell’s  illustration of her (here at BNP we’re big fans of him and his work!) Can you pinpoint exactly what you loved about his illustrated to create and wear a costume inspired by it?

Alanna M: I’ve been a big fan of Jamal’s work since I met him and the From A Hat crew a couple years ago. His art style is one that I really connect with and his designs are super sleek and defined. The Wonder Woman illustration he did was a perfect combination of “supersuit” and warrior armour, and used elements of clothing style that I always find flattering (high collar, no sleeves, emphasis towards arms and collarbone). It was great being able to actually talk to the artist about the costume, and Jamal even provided me with a design for the shield. I love doing fabrication and armour but sometimes I like my costumes to evoke that sense femininity too, so this design was perfect. Also pants. It had pants. Which is always very exciting.

BNP: How, or should I ask, what makes it easier for you to navigate not only the cosplay circles but the nerd circles as a women of color when there’s still a very present need for more representation for marginalized people (and also more safer places for them)?

Alanna M: Honestly, the POC geek community itself is part of what makes it easier to navigate these circles as a woman of colour. I find many POC cosplayers do their best to voice their support and encouragement for each other, and from that comes an eventual understanding that we belong in these spaces just as much as everyone else.

[divider type=”space_thin”]
There is still that small, constant preparedness to “prove myself” when someone tries to challenge my geekiness (and it has happened more than once), but overall I’ve learned to be confident about my belonging. Cosplay has been a great channel for this, giving me a chance to not only be creative about my fandom, but also express my geekiness in a very obvious and physical way. If people don’t believe I’m a geek at first, they certainly do after seeing me march down a convention hall adorned in golden armour and brandishing a homemade greatsword.

BNP: You contribute to a fantastic nerd website, www.geekchicelite.com and actually handle many of the cosplay features yourself! Please tell us a little about GeekChicElite and your involvement there.

Alanna M: Geek Chic Elite – or The GCE – is a geek entertainment and pop culture website made by geeks for geeks, that handles all kinds of content like film and tv news, cosplay features and even interviews with writers/actors/creators. We cover topics like gaming, comics, and just geek life in general. I deal a lot with the cosplay topics, interviewing cosplayers and photographers or featuring some impressive photosets and stories I find. I’m one of those people that saves countless cosplays that just blow my mind, so it’s been nice putting all those collected galleries to use. I also do my fair share of news and opinion articles, which let me express all the geek ramblings I usually have to bottle up in the “real world”.

[divider type=”space_thin”]
BNP: Speaking of the Avatar:The Last Airbender and Legend of Korra universe who is your favorite avatar and what element of bender do you fancy that you’d be?

Alanna M: I’m a HUGE fan of A:TLA and LOK. Although I love Aang to bits, Kyoshi is actually my favourite avatar. She’s ridiculously fierce and evokes so much power, and her storylines are so interesting. As for me, I like to think I would be a waterbender; fluid and versatile.

BNP: I found out that your sister also does cosplay. Did you two start cosplaying around the same time? Do you have a memorable story from a time you two were out together at a con or helping each other with costumes or props?

Alanna M: My sister (RK9 Cosplay) is actually the one who got me into cosplay. She started really getting into it about a year before I did, and made my first couple of costumes for me (Katara and a Jedi). Over time we’ve learned that she’s a much better seamstress than I am, while I’m more comfortable with fabrication, so we’re both able to offer each other tips and advice based on our strengths. We’ll sometimes do group or partner cosplays together – like Harley and Ivy, Disney Princesses, women of Fable, and Boogie and Jazz from JSRF.

Trying to think of just one memorable story is hard, especially when there have been so many moments of “here wait hold this… I need you to help me do my hair/wig… oh my god something broke HELP ME FIX IT”. We’ve accidentally stuck each other with so many pins while making costumes…

BNP: Cosplay is most certainly art form. It is be no means new, people have been dressing up as their favorite characters for years. What, in, your opinion are the main factors in what makes it more accessible for people now versus ten or twenty years ago?

Alanna M: I didn’t really know much about cosplay beyond about 5 years ago, so I can’t say for sure what’s changed the most. But I do think the Internet and social media plays a huge part, as well as the trend of geek “popularity”. We’ve reached a point now where being a geek is considered pretty “mainstream”, and social media is the vessel through which it grows. It’s easier for people to discover cosplay and realize there’s an entire community of people like them; visibility is at entirely new levels now.

BNP: Favorite small creature/object/character that brings you much joy and why?

Alanna M: Oh gosh that’s hard. I know she’s not exactly small but she probably thinks she is, so I’ll say Naga from Legend of Korra. I adore dogs, and having a giant one that you can ride is pretty much the best thing ever. I do love BB8 too though. 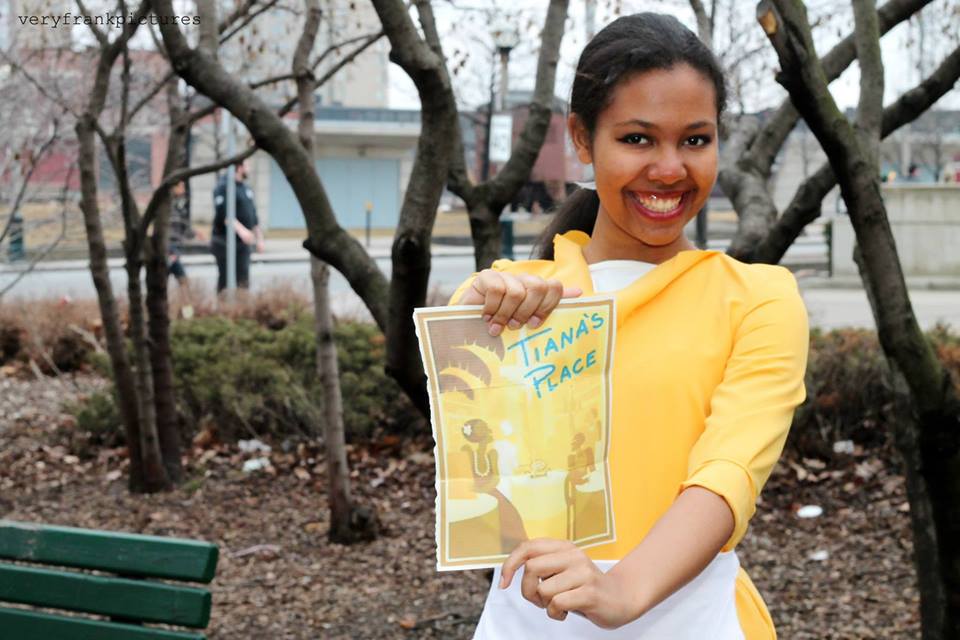 BNP: I LOVE SHURI. But it’s rare that I see Shuri cosplay! Now that we’ve got concrete information regarding the future Black Panther film (Chadwick Boseman was cast as  T’Challa, Ryan Coogler is directing!!!!) what do you hope to see regarding Shuri in the storylines of the Panther films?

Alanna M: I love Shuri too! I became a super fan in record time and just had to cosplay as her. I am BEYOND EXCITED for the Black Panther film. I hope in this first installment we see Shuri introduced as the Princess of Wakanda, setting her up to take T’Challa’s place as the Black Panther and eventual Queen later on when he becomes more involved with the Avengers (and therefore is needed away from his country) perhaps after Infinity War. I would love to see a Black Panther sequel focused on Shuri becoming the next Panther and dealing with a threat in Wakanda. She’s a fantastic character so I hope they do include her and use her character well. 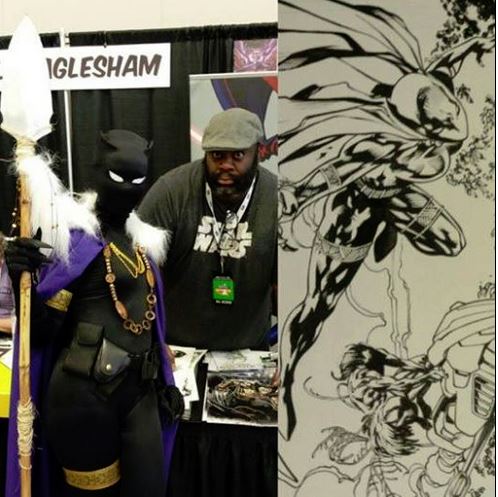 BNP: Lastly, what are your goals and what cons are you attending in the future that folks can find you at?

Alanna M: I honestly have so many cosplay goals, and a ridiculous list that gets longer every day. I have some HUGE projects I would love to accomplish one day if I ever have the time, and I’d love to do some costumes that involve wings, try some projects with LEDs and other lighting, and perhaps give Worbla a shot. As for conventions, I’ll be attending Toronto ComiCon and Niagara Falls Comic Con this year, with Fan Expo and Anime North most likely on the list as well.

See more of Alanna on twitter and her Facebook page here! Also be sure to check out GeekChicElite.com !