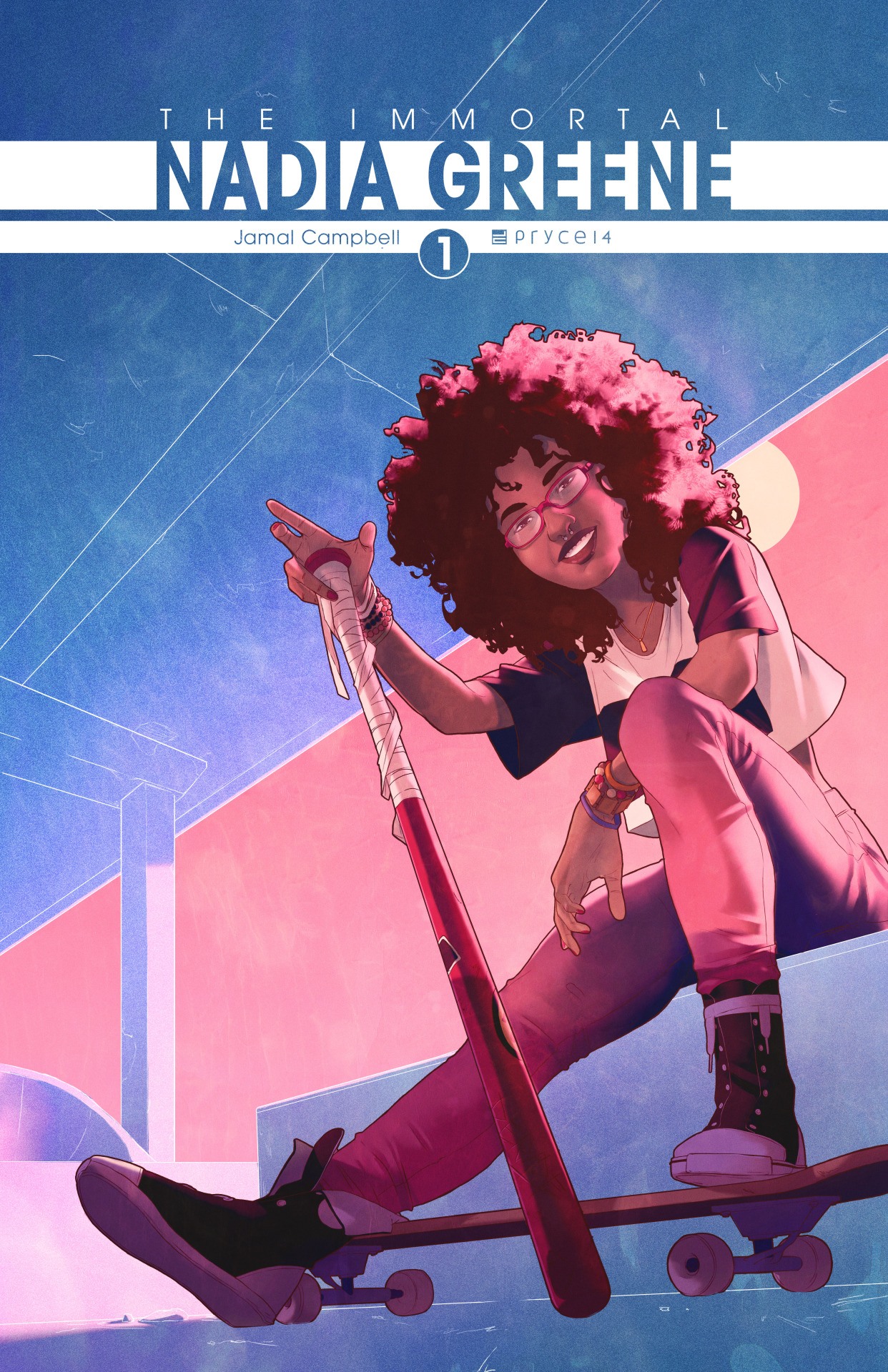 So I’m on Tumblr right, reblogging otters and disagreeing with folks’ fan casting for movies (y’all know who I am) and I came to a page from Jamal Campbell’s webcomic that stopped me dead in my tracks. It stopped me not just because of the artwork, but due to the scene it was portraying: a young brown girl having to deal with her own mortality and the physical manifestation of death. In this instance, death is Hel, ruler of the Nordic realm of the dead. The page really hits home, especially knowing that when you go on any form of media you’re going to see a new Black body that became a hashtag. I’m looking at this page watching death console this girl about to cross over into the afterlife. It’s a hard scene to watch unfold as on one hand, it looks to just be the young girl’s time, while in the real world it seems to always be our time. You can’t help but wonder how used to Black boys, girls, men, and women that death has become at this point. Even if unintentional, art is constantly imitating life. As I continued scrolling down thinking about the page and how serene yet sad it was, I was caught off guard by the next page: ARE YOU FUCKING KIDDIN ME?! Did she just… Did this 5-year-old girl just duff death?! Yes! Yes! On everything I love YAAASSSSSSS! Nadia Greene is the girl’s name, and when you got enough confidence to come at death’s crown (literally) with the Louisville slugger like it’s nothing?! You get my support, no questions asked. Campbell has Nadia Greene refuse to go quietly into the night in the most unapologetic way possible and I love it. Not only that, but I need to see it. I need to see this Black girl with the will to say “Nah” Rosa Parks-style in the face of death swinging for the fences. I need to see her being able to fend for her life without the tone or action of which she does so being policed.

Nadia Greene is out here literally fighting for her life day in and day out against reapers trying to clap back at her. Campbell has truly created something original, diverse, and different with this webcomic and I can’t fuck with it enough. We get a Black girl who grew up a sickly thing, being told she wasn’t long for this world, telling death day in and day out, “Oh you wanna take me? You gon’ catch these hands first.” 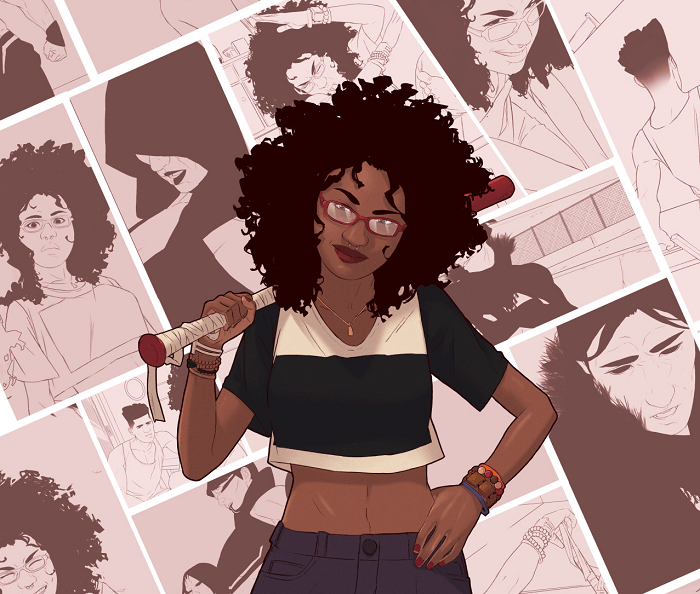 Reading the first few pages of this series I immediately remember back to when I was visiting my friend Thuli in South Africa. We were having lunch on an outside deck, and from our seats we could see the pool slightly below us. Thuli noticed her friend’s youngest daughter (about 4) had lost one of her arm floaters and was struggling to stay afloat. We called for her older sister who was in the pool to help her, while others in closer proximity were on the verge of jumping in, all the while the little girl never screamed, panicked, or freaked out. She simply kept struggling towards the wall, stone faced, frightened but determined. By the time her older sister got to her, she had already saved herself. After all was said and done, when the adults had calmed and the child was safe and happy wrapped in a towel, nestled in her mother’s arms, we all marveled at how in control the she was. I remember jokingly saying:

Me: Aye, she had that situation on lock. There comes that time in every Black girl’s life when it comes for you, yo. You never know how or when, but when it does, you gotta sink or swim.
Thuli: She was ready. She had no idea how ready she was.
Me: It came for her early though.
Thuli: Welcome to Black womanhood, Holmon. The world never waits, and it don’t ever stop coming for us.

The Immortal Nadia Greene is a straight up testament to that. I asked the creator Jamal Campbell how his idea for Nadia Greene came to be:

“I came up with the concept for Nadia Greene pretty organically. When I was brainstorming ideas for a story, the one idea that stuck with me was the concept of death. More specifically the primal fear associated with it and the fact that we can’t fight it. But what if we could? Expanding on that question eventually grew into The Immortal Nadia Greene.

“Speaking to Nadia herself, her character was very much informed by the current conversations. Between the push for more gender and ethnic representation in comics and media, to the violence and prejudice against Black people resurfacing into the public consciousness,

(and is there any greater show of strength than defying death itself?), and her fight and progress against a world that is set against her living was contribution to the conversation that I wanted to make.” – Jamal Campbell

The series gets updated every Tuesday by its creator Jamal Campbell and can be found here. I keep thanking the Tumblr gods that this came across my dash. I’m excited to see Nadia’s story, who she is, what drives her, and just how strong her will is.

“They told me death is inevitable.
That I can’t fight it.” 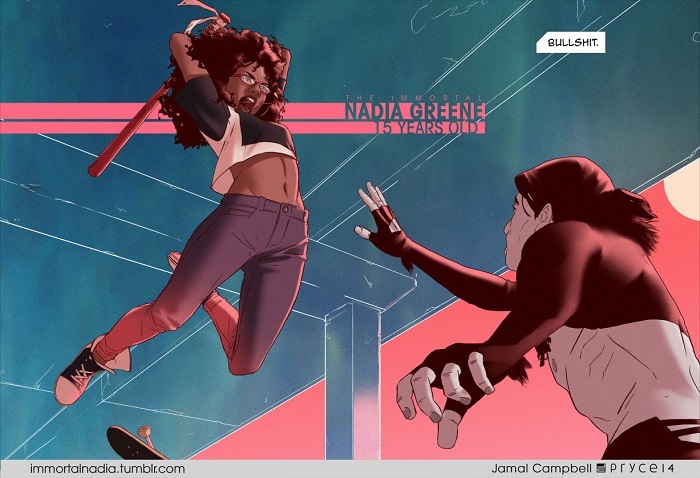