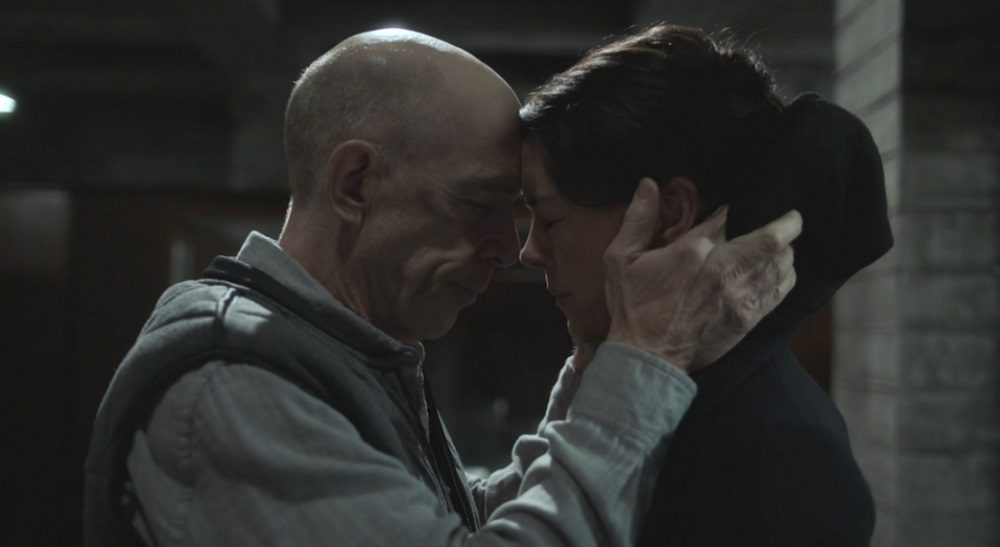 Counterpart Recap: You To You

***Spoilers be setting up the briefcases and talking out both sides of their face. Find more of our Counterpart recaps here.***

In the words of Heath Ledger’s Joker: Away. We. Go. Shit just got all the way fuckin’ real. The sleeper cell sitting around talking about the shit they never got to do. Which means, they don’t plan on getting the chance to do them. I want to remind y’all that the median age for this crew looks to be about 23, 25 tops. Young Ethel ain’t ever been kissed cuz her other never got the pleasure. Dude thinks he’s doing her a favor, but she basically hits him with, yeah, that’s overrated my dude.

She noticed she ain’t getting that hot virus pumped into her veins like everyone else, but that’s because she’s got another job assignment.

Wes-Ian is driving Emily Prime and Howard to the Office so they can meet with management. I mean…ain’t this international criminal Wes-Ian? I mean, I guess not cuz dude still giving orders. Does management not know he killed they’re whole damn team? At any rate, he separates EPMD and Howard before the big meeting.

Yo, I love Baldwin, but how she so easy to find, man? Did she fill out the census or some shit? Howard in Black is at the door, and as a peace offering, removes the clip from his gun. Usually a muthafucka brings a bouquet, or a fruit basket, but whatever.

This scene was all bars. HIB is trying to upset Indigo’s plan, but Baldwin is mad reluctant cuz she don’t want to kill anymore. HIB is like, sheeeeeiiiiiiit. He gives her the straight. And then the narrow.

“I spent too long pretending to be someone else. I look around here, see you surrounded by stuff that doesn’t belong to you. We are who we are. We kill people. Then, we eat breakfast.”

Speaking of Indigo, Snake Ass Clare is giving up all the deets. Also, I’m very much in “Protect Naya at all costs” mode. She too good, yo. As soon as SAC start hesitating to give people up, she tells her straight up, I make a phone call, none of y’all bastards seeing the light of day. Fam, can you believe that Ballad of the Fallen Pete trying to interject here?!?! I was like, bruh, what are you even doing right now? If you don’t shut your ass up…

Naya was like, oh fuck you too Petey. Then, they gonna experiment on your child, so please, try me. I wish an echo would. And then, cuz Naya is the most treasured pit bull on two worlds, she presses SAC for the name of her contact. And when SAC said his name was Spencer, LMAO. BFP looked like his religion fell straight out his body. BFP look like he just woke up outside of The Matrix.

I was so ready for more gangsta ass Naya shit, but then her family disrupts her flow. Her husband and son Sam come in, and she gotta tend to them. I amend my previous statement: “Protect Naya and her family at all costs.”

Management is meeting with Wes-Ian, and he’s telling them…a version of what went down. They’re cool with that, but mostly that he brought EPMD in. They want her to interview someone from the other side, per their request. Wes-Ian don’t like this shit and protests, but Management ain’t really trying to hear him. He gotta set EPMD up in Interface.

But come on, you knew what was about to happen. EPMD goes down to that last interface room, and I don’t blame her for being bugged out about the shit. The way the doors were opening, looked like an invitation to her execution. But nah, just Emily Amnesia sitting across from her. Looking smug I might add. For once, I feel for EPMD. I wouldn’t even be mad if she tried to merk E-Amnesia right then and there.

SAC makes the call to OG Spencer saying she needs to meet. He gives her an address and info to get into the building. BFP gonna take New Spencer Who Dis in to see SAC’s not-mother for the drop off. Naya is like, yeah, you know this is all the way fucked up right? You named your daughter after your first love? You a could piece of work.

BFP comes back in just in time for OG Spencer to text SAC the address. Which is the same address that HIB and Baldwin are headed to. LOL, yes. YAAAAAAAAAAS.

Man, this Emily on Emily shit. Where should I even begin?

So, it’s funny (brilliant) to see EPMD on the defensive and E-Amnesia clearly driving this whole conversation. She tells EPMD that Mira has set up a trap for Management, and this whole thing bout to go belly up real quick. EPMD asks how she knows so much about Indigo and E-Amnesia reveals that she’s the one that found evidence that her world was responsible for the flu. And then she told Management. Management told her to kick rocks and also promoted her for her silence. And then Mira got a hold of those notes. As E-Amnesia put it, “she used those notes to radicalize a whole generation.” I. Say. Got. Damn. Now listen, this is definitely Management’s fault. They could’ve handled this half a hundred different ways. But in case you haven’t been loving the return of E-Amnesia, this shit ain’t gonna help.

And then, cuz there’s no separator, E-Amnesia gets up close and examines her. How EPMD did not choke her out, I will never know. I thought that shit was a sure thing. Especially when EPMD asks her how many times she came over and stood in her life. E-Amnesia comes up with all kinds of BS, but basically, she realized that she couldn’t have had a child cuz it would’ve taken her under. Basically like it did with EPMD, hence all the drug use and rehab.

Then, E-Amnesia, cuz she ain’t been fucking bold enough as it is, asks EPMD if she’s lost Howard altogether. EPMD is like…nah, you still got that bastard.

Howard still talking about a deal, but no need. Wes-Ian lets him know that he’s being sent back with no conditions (per E-Amnesia, but Howard don’t know that). Then he hits Howard with the fact he knew who he was cuz of how he defended EPMD back during the interrogation. “Love betrays us all.”

Management gets briefed on Mira’s plans, so instead of meeting her in the same room, they just gonna let her enter the building but not up to the fourth floor. Bruh…this sounds like a terrible plan. Also, EPMD has to stay outside, and Wes-Ian gonna handled the hand-off. Which to me sounds like EPMD gonna be out of harm’s way, but we’ll see.

The whole team is mobilizing out of the building, but EPMD is walking Howard to the crossing. This shit is a tough goodbye for both of them, and EPMD is really not about this losing the kindest version of her husband life. But also, gotta be some weird stuff kissing your not-wife passionately before you return to your wife-wife, voluntarily. Howard takes the longest walk, yo. Every step looked like it was painful and also a relief. E-Amnesia greets him, and everything is…cool for now? Yeah, we’ll see.

And here’s Mira doing the Queen’s Walk. Here and Tragic Yanek sit by the river before Wes-Ian and his crew rush in. But before that, there’s a father trying to make sure his son doesn’t catch a cold by putting his jacket back on. Mira say some ol’ ominous shit like, “Someone should tell him that’s not how you catch a cold.”

Whole building is evacuating while they bring Mira in. They take Tragic Yanek upstairs to talk to Management, but they tell Mira, she ain’t going there, cuz they don’t negotiate with terrorists…

They take the cuffs off Tragic Yanek and send him to the meet while Management makes their way over. Most of the OGs are there. It’s fucking go time man. 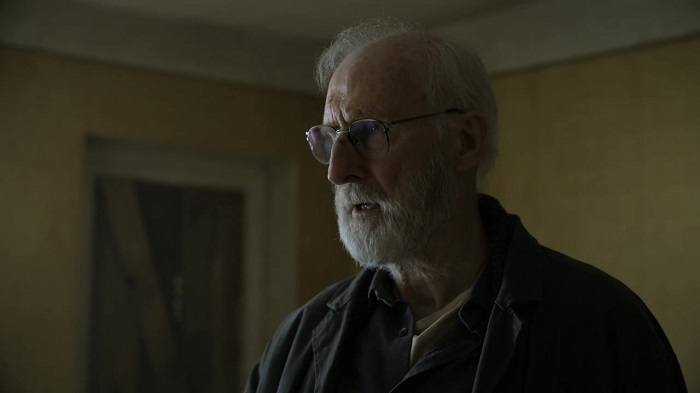 Speaking of, SAC is on her way to meet OG Spencer with the wire and does a send off with BFP first. She enters the building. I feel like there’s not much of a guarantee she coming out of it.

While Medicare Management meeting on the fourth floor, Mira trying to fuck with Wes-Ian. She start talking that regime change with him, but so far, Wes-Ian ain’t buying.

Man, Tragic Yanek got some nerve man. He talking about how corrupted the crossing is, but he was the main contaminant.

And Mira is doing the work. She’s like, yeah, this sitting in a cell shit has been cool, but I’m getting bored. And you bout to let me out Shaw. Of course, Wes-Ian is in denial, but he ain’t put together that obviously Mira has some other shit working up to this when his phone rings. And yeah, they done kidnapped his not-wife. On this side. Mira hits him with, I can’t imagine what it would be like to lose her twice. Mira with the checkmate.

As for SAC, it ain’t going great. She’s asking questions about the plan to move forward and OG Spencer is being evasive. When she starts getting particular, he’s like, yeah, so why you asking again? And, he finds the wire immediately. E. Media. At. Ly.

Of course, OG Spencer freaks the fuck out, and SAC tries to talk him down. But like…did she think that he was going to let her walk out, lol. Fam. He starts to choke her out, but someone comes in to disturb that shit. She makes that quick ass exit, calls her home team, and tries to evade them down into the subway. And of course, she runs by Baldwin who is staking out the building from before.

They catch your girl SAC down in the tunnels, and it’s like…yeah, SAC, this is probably the end. Until one shot Baldwin came through with the fucking heat. She puts one in the henchman’s dome. Then gets ready to brain OG Spencer before SAC jumps in front. But we didn’t even know HIB was down here too with his lurking ass. He’s like, bet, we’ll take them both out…

Meanwhile, Tragic Yanek is still trying to convince Management to close the doors but NONE OF THAT SHIT MATTERS NOW. So, I guess we know that Wes-Ian don’t really have the stomach for this. Not really. Cuz Mira come doing the Queen’s Walk up in the fourth floor. And then she kills every last muthafucka in the room. Everyone got one shot. No wasted bullets. It was fucking ruthless. Well, everyone except Tragic Yanek. Who she tells he can go home now. LOL, what? Apparently, Mira that got her favorite band on cassette back in the day is still alive with children. What in all fucks do we do now man?

Mira sets up shop in the big Interface room and contacts the messengers. When they are ready, she says, “Upstairs has an urgent message.”