So, as someone who has been so famously against this character for as long as the character has existed, I’m willing to bite the bullet and admit that I’m finally becoming a believer. Cyborg might just be earning his place in the A List pantheon of DC heroes at last. David Walker is succeeding in making him less of a hero and more of an all around character. 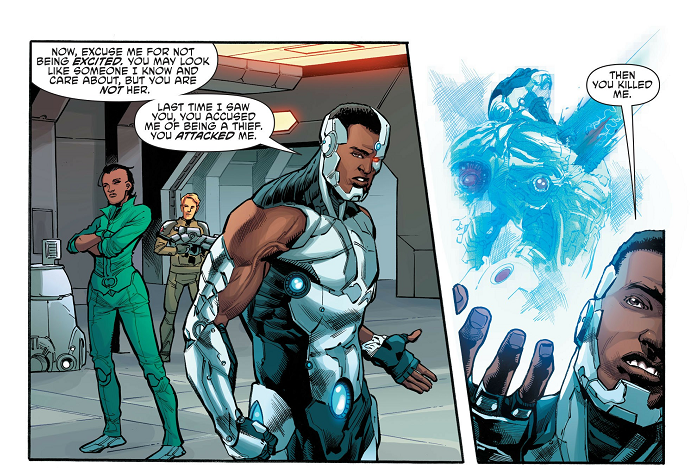 This week, Cyborg continues holding the line in the war against the strange cybernetic aliens threatening Earth. The action slows down a bit to offer up some insight into our villain as well as some backstory for Victor’s enigmatic allies. I have to applaud Walker for adding emotional and psychological layers to some of the supporting cast. Even a static character like Silas Stone deserves a little more depth. The action/exposition ratio is balanced out a little better than the last issue. Sadly, the visuals took a bit of a hit this time around, though. Ivan Reis only handled the layouts for Issue #4 while Felipe Watanabe did the actual penciling. The structure and pacing are there, but the line work and facial expressions are just not up to snuff like they were under Reis’ expert care.

Bottom Line: The story is there, the pacing is on point, the characters are entertaining, but Ivan Reis’ absence made all the difference this month.