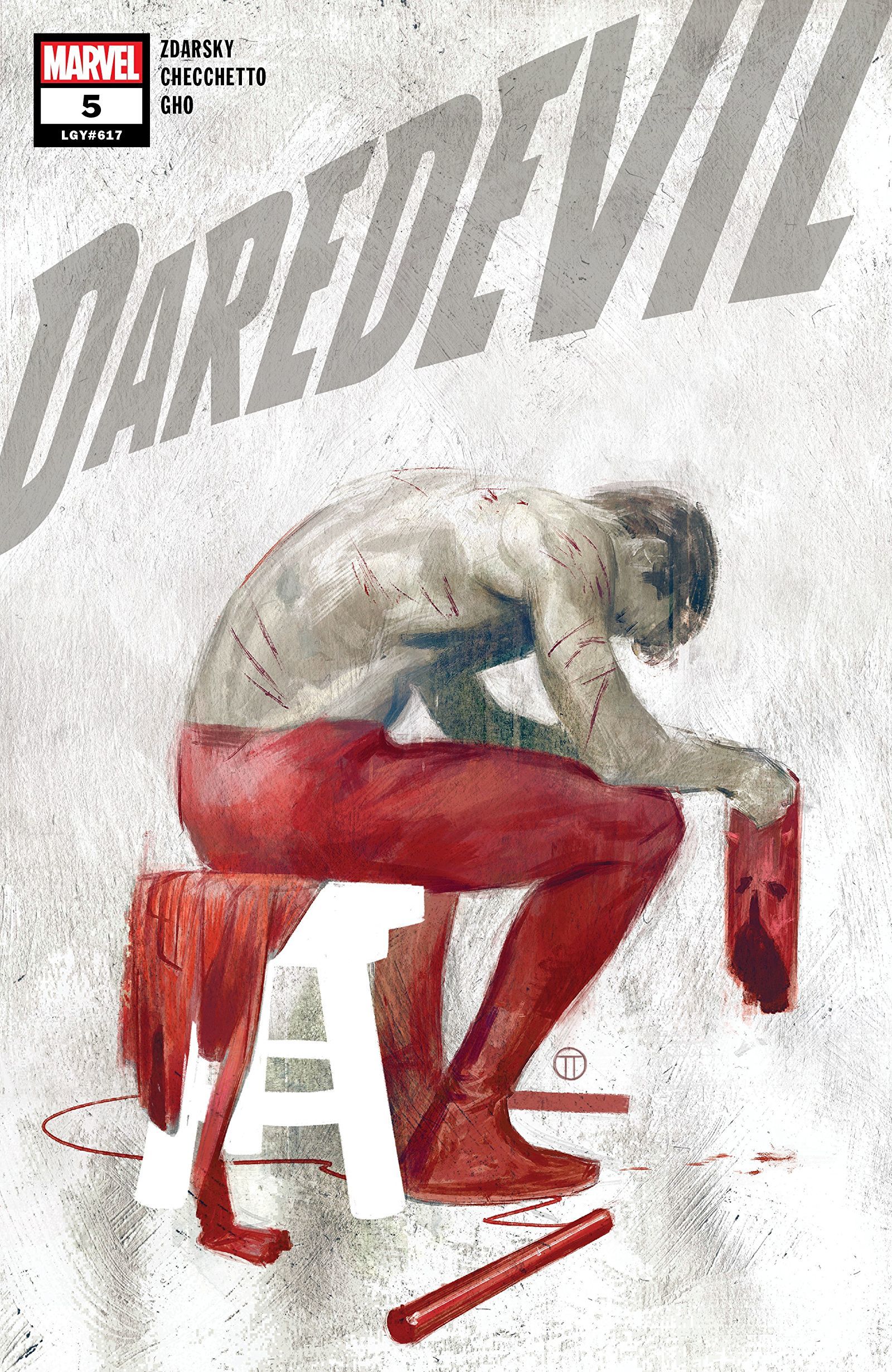 The “Know Fear” story arc winds down this week, but Chip Zdarsky and Marco Checcetto go hard in their fifth issue. Issue #4 ended with Daredevil hurting after a violent but philosophical interaction with the Punisher. Let’s not forget that it was right after an unsuccessful brawl with Detective Cole’s burly ass. DD’s gunshot wound isn’t helping matters, either. In classic, self-destructive Daredevil fashion he decides to interfere with a drug shipment by the Owl. Initially successful, he finds himself overwhelmed by a horde of lackeys. When he comes to, he’s been rescued by his superpowered friends. Matt is solemnly convinced they’ve come to turn him in after his grisly and unstable behavior, but his fellow Defenders are supportive. Daredevil learns something disturbing as his fellow Defenders attempt to comfort him. He is not alone in his crisis of accidentally killing someone. In his apartment, he finds one more person looking to discuss his latest actions with him. This friend described by Murdock as “the best of us” offers much more criticism than comfort. The comic ends with a battered Murdock in his home; tears running down his face. 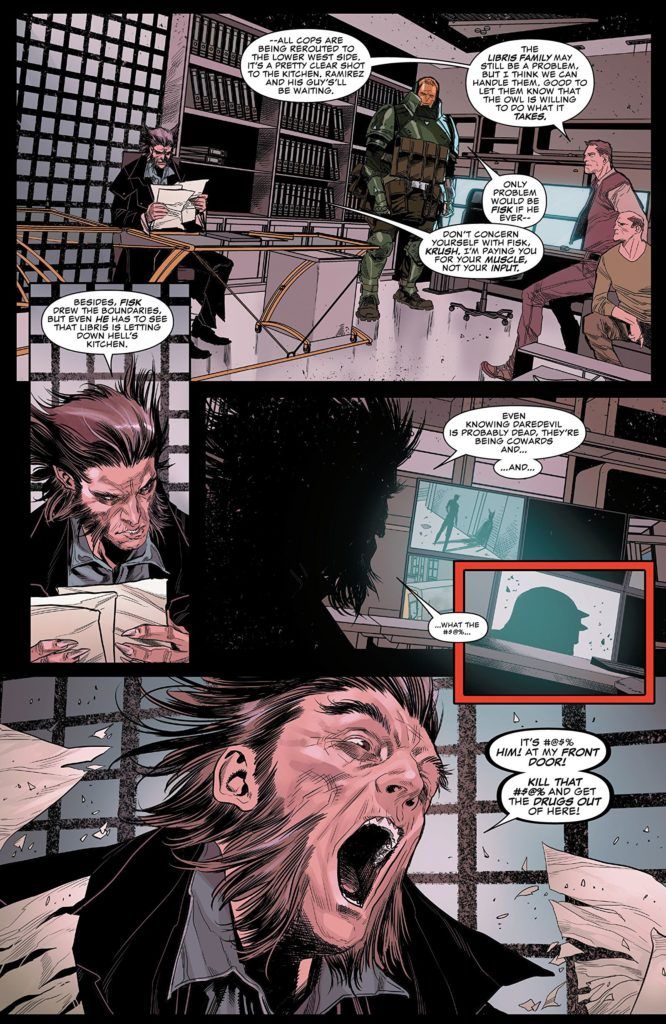 I thought it would be impossible to top the last issue with the Punisher, but Zdarsky and Checchetto blew my mind in this comic. They put together a story with enough action, drama and introspection for three separate comics. Zdarsky has a great way of describing the world through Murdock’s perspective during a fight. He’s one of the most detailed-oriented warriors in the Marvel Universe and it shows in this comic. The pacing is quick, yet Checchetto draws the fight out masterfully to deliver the feeling of instantaneous thought process-to-reaction I always associate with Daredevil. The MVP panel in this book is Daredevil staring down the horde of muscle in his procured Punisher shirt and a car door as a shield.

The scenes of Daredevil and his friends discussing the ethics of super heroes and unintentional deaths is some moving comic book work. The scene with him and the rest of the Defenders showed a great contrast between them. I’m not 100% sure but I don’t think I’ve seen Luke Cage, Jessica Jones or Iron Fist kill anyone. Their attitude is nonchalant compared to the righteous Matt Murdock. I really like this framing because it gets to the heart of Daredevil. He doesn’t avoid killing at all costs because of a high-minded morality (although he does have a strong moral stance against it), but because he is a violent person afraid he’ll go out of control. 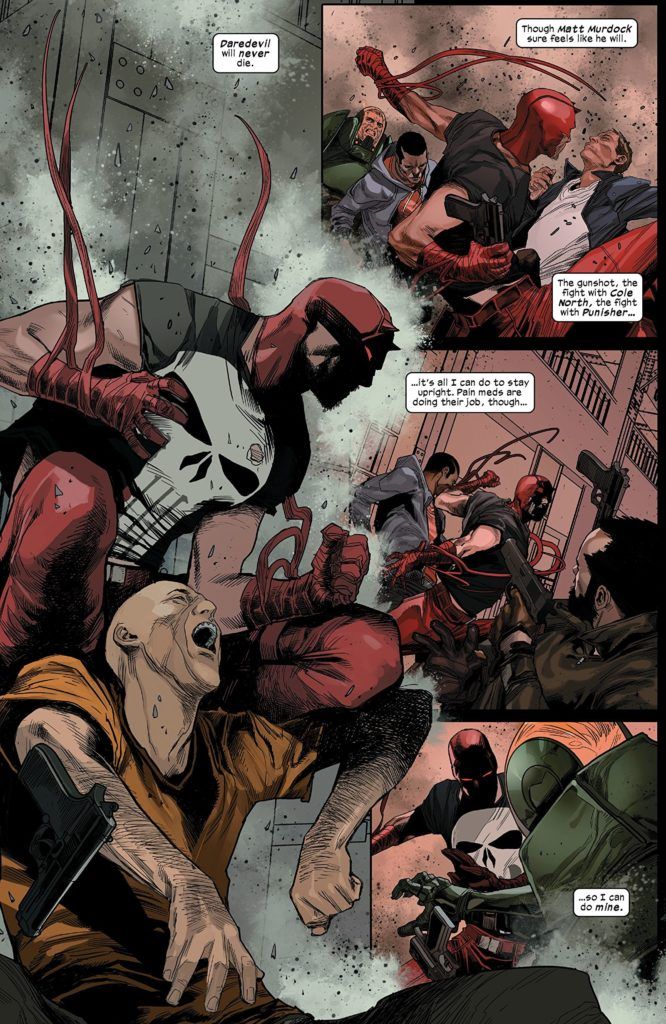 The scene between Daredevil and Spider-Man was the best part of this book. The interactions between the two tend to emphasize Spider-Man’s goofiness and Daredevil’s annoyance. This issue highlights how highly Daredevil thinks of Spider-Man, and how seriously Spider-Man takes superheroing. Between the intense dialogue and the beautifully intimidating shots of Spider-Man in the shadows, I’m closer than I’ve ever been to thinking Daredevil is done being a hero.