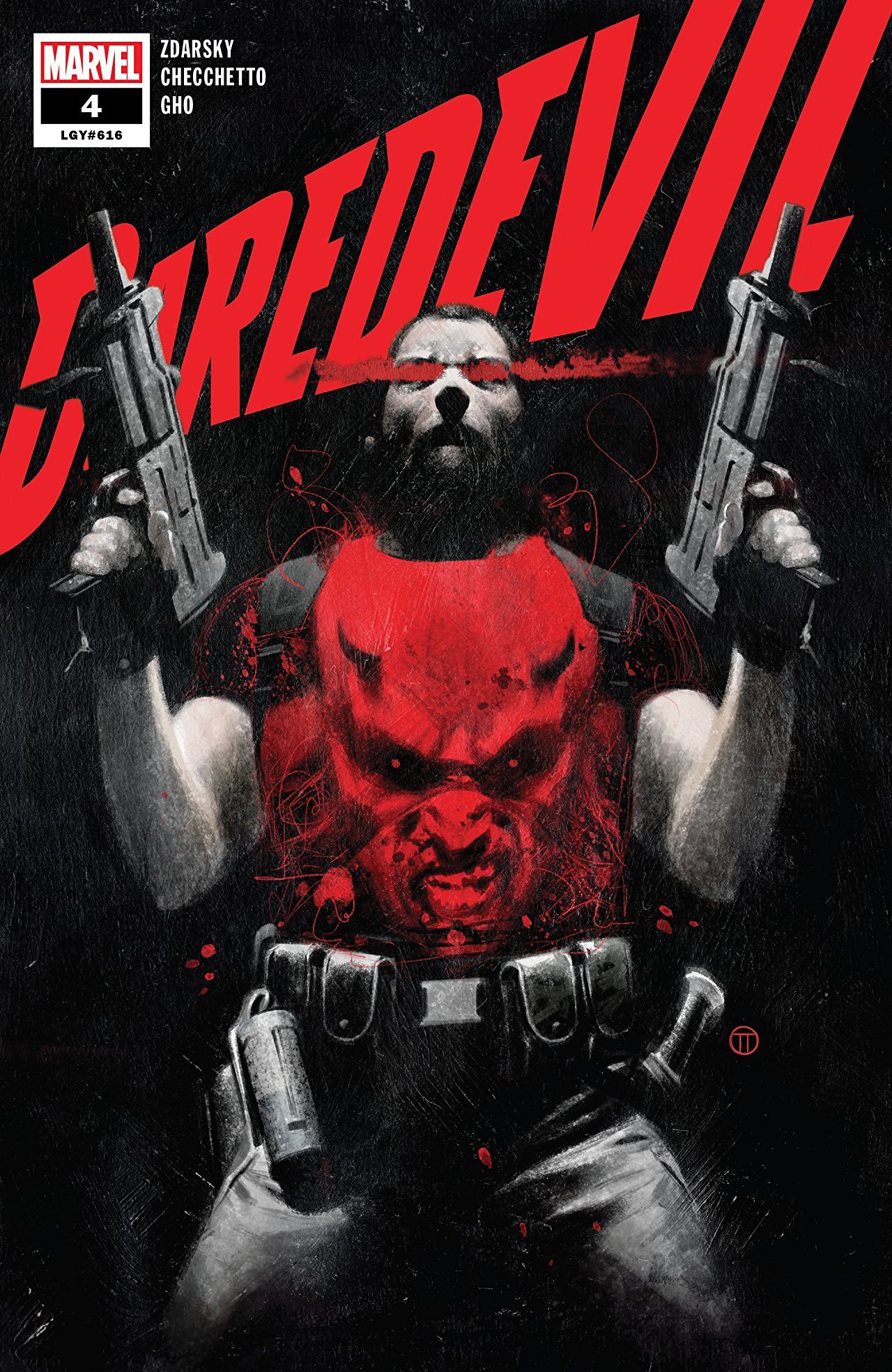 What I need is more comics where the hero does something stupid for dramatic effect and then immediately acknowledges that it was stupid. It’s everyone’s favorite time of the month, Daredevil week! Before the sermon let us give thanks to the spirits of Stan Lee and Bill Everett for blessing the holy prophets Zdarsky and Checcetto who relay the Holy message of Daredevil’s everlasting awesomeness. Excelsior. Now brothers and sisters. If you loved the scene in Daredevil season 2 where Murdock and Castle debate their moral philosophies on a roof top (and of course you do since you’re not heathens) you’re going to love Daredevil #4. Last issue found a weakened Daredevil saved from arrest by no other than the Punisher. The news that Daredevil murdered a man attempting to rob a liquor store peaks his interest. Has Daredevil finally given up on his code not to kill criminals? (Spoilers: No. No he has not). But Punisher has a captured criminal and he wants to play a game (Like Jig Saw. Get it?). Meanwhile, Detective Cole is relentlessly ostracized for his street fight with Daredevil. The notable exception to this criticism is from beloved mayor Wilson Fisk who praises his unflinching integrity in the face of a whole department that would allow for the unchecked vigilantism of Daredevil. 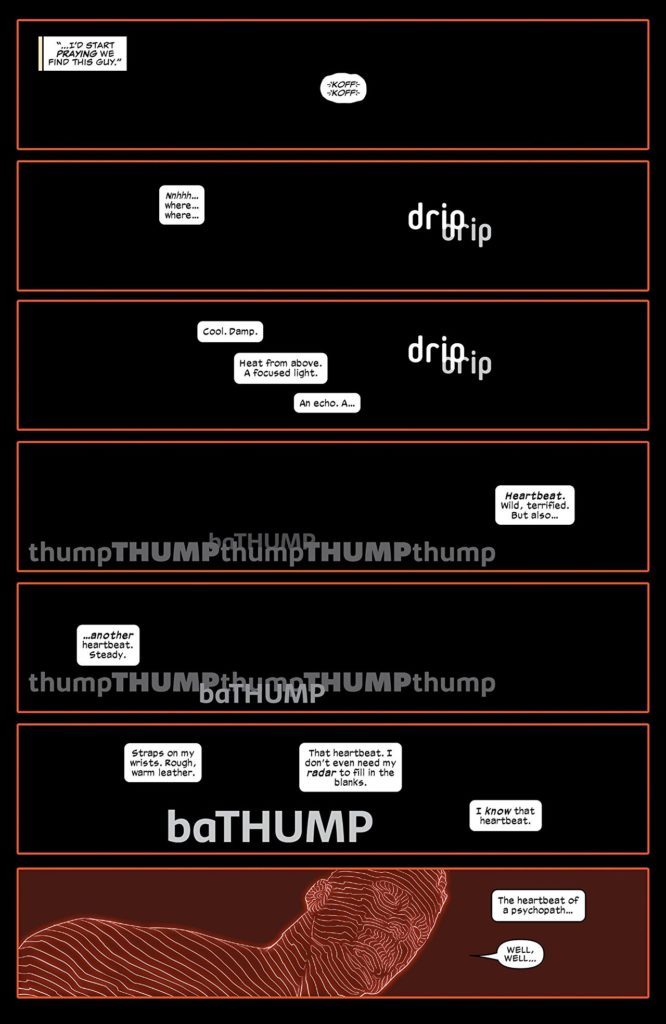 You can probably tell that I am crazy excited about this issue. The debate’s been had before and will keep happening between characters like Punisher on one side and the Daredevils on the other. This is because the to points are extremes and most of us land somewhere in the middle. We want to believe in redemption. Props to Daredevil (and Zdarsky by extension) for acknowledging the potential role of institutionalized racism in a person’s turn to crime. On the other hand, we want satisfaction against those we deem evil. Who among us would hold a vigil if a Punisher-minded individual murdered a hypothetical head of a hypothetical drug company that hypothetically profited from creating and vilifying drug addicts? As if that conundrum wasn’t enough, Detective Cole’s plight is also fascinating. I feel for Cole, pushing against what feels like the entire NYPD who wants to give special treatment and levity to a vigilante. But then to have a person so blatantly corrupt and morally bankrupt sing sweet praise of justice and virtue into your ear must be devastating. 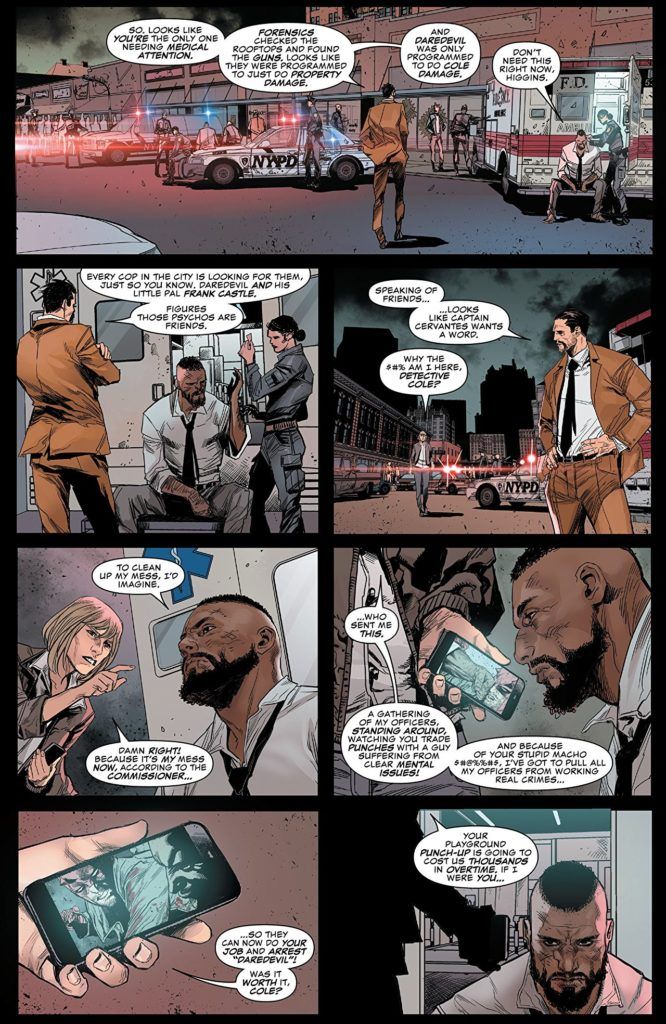 Checchetto continues to murder this art. The amazing contrast between the cover and the last page alone is enough for me to recommend the hell out of this book. His crowning jewel is the apex of the Daredevil vs Punisher fight amidst the fire and fury of an explosion (one that may or may have not been caused by a stupid show of bravado by Murdock). Reading this book continues to be my religious experience for the month.

10 “Obvious Jon Bernthal References” out of 10