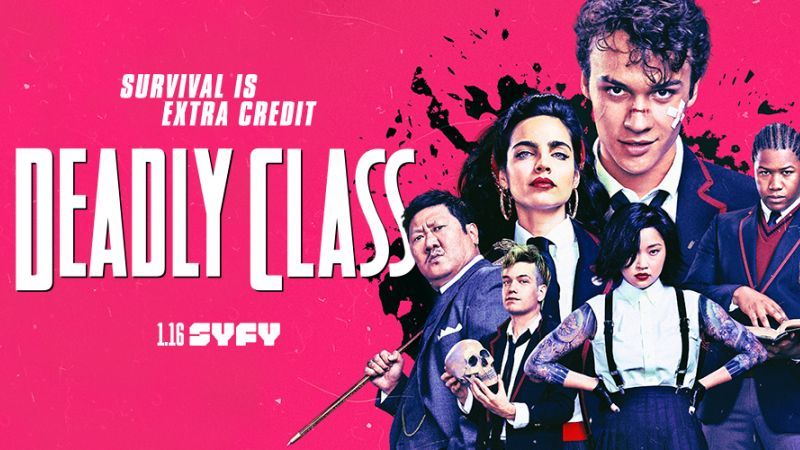 Straight outta SyFy comes a comic book adaptation that had me hooked since the trailer dropped last summer. Deadly Class is set in 1987, one of the greatest years this planet has ever seen and not just because it birthed ya boy right here! This was prime 80’s counterculture.

The hair was still big, the streets were still filthy, and the spurned inhabitants of this nation were still figuring out who we were and if Reagan was a genius or piece of garbage. It’s the perfect backdrop to follow a young homeless teen as he does his best to get acclimated to a high school for murderers, sociopaths, and assassins!

How Deadly We Talkin?

We pop off with a sneak peek at the world of Deadly Class. A flash forward shows our protagonist, Marcus, sitting in class wondering if he’s really surrounded by a room full of teenage killas-to-be. Ya boy Benedict Wong comes through setting the brutal tone as Master Lin, the ruthless headmaster of King’s Dominion. How ruthless you ask? Ruthless enough to cock back like Barry Bonds in peak MLB steroid era and destroy one of his students’ whole face regions with a diamond studded cane for nary a damn reason. Yeah, this is life now Marcus, you wit the shits or na??

With the stakes firmly established, the episode kicks off with Marcus’ backstory. Dude been an orphan for most of his life and would’ve been his whole childhood if a fire hadn’t ripped through the orphanage home and claimed dozens of young lives that he’s responsible for. Now, the lil homie on the run, dodging one time, and just tryna stay alive. He even got homeless dudes out here running him for his sole possession, a pic of him and pops back in the day. It’s looking all the way trash for his life on the streets, until that fateful angel dust laced day.

Too High to Riot

Marcus is strolling along, picks up a joint off the ground, hits it like Cheech and Chong taught him, and quickly finds out that thang was laced with angel dust! Homie out here lookin like Smokey in Friday after the Mexican’s had him tweaking off that wet. He goes staggering through this Latin parade until the cops spot him, and he’s back on the run. He gets assistance from a couple of kids in the crowd including an intoxicating girl in Dios de Los Muertos makeup who slices up them boys in blue like Kitana with her patented fans.

A skateboard wielding punk rocker and accomplices hide amongst the crowd while helping the runaway get outta there with the quickness!  A badass leather rockin young lady on a motorcycle follows him and offers a ride outta there, but that boy high as hell and couldn’t spot an assist if it was coming directly from the hands of LeBron James, so he bounces and is swiftly cornered in a parking lot.

Sidebar: While all of this madness has been going down, the episode score and tracklist is drippin hot magma! The Russo brothers really know how to get you entrenched in a production using visuals and sound, cuz I was on the edge of my seat fam!

So cops got him in their sights like the NYC pizza rat. It’s about to be a wrap for the young buck when homegirl whippin the bike flips the switch lookin for all the static! She calmly steps off her ride, walks towards the cops, and places clearly trained hands of execution on every square inch of the POPO!! Saya, as we find out she’s called, pulled up beasting like Akane at the end of that Shogunworld Westworld episode. She came just short of decapitating a mufucka, then tells Marcus to “get on” and they breeze on outta there.

Master Lin sits him down and asks if he’s satisfied with his life, while the kids who hit Marcus with the angel dust assistance sit back and question their headmaster’s decision to bring this orphan killer on board. Lin ain’t tryna hear that though. He sittin all gangsta in the chair talmbout “change the world with a bullet,” and I’m getting hype like Durant said he’s gonna come play for the Knicks! Then, Marcus let’s me down and passes.

After rejecting the offer, Marcus returns to running the streets, crashing on park benches, and 5-0 looking for him. It’s a dark time, but that darkness brings us one of the best things about this episode! The Russo brothers deemed us worthy of an amazing mid-ep animated scene that was so powerful yet so tragic. We’re introduced to Barbara fucking Salinger, the suicidal schizophrenic building jumper who killed his parents.

The animated scene ends, and Marcus is in such a bad place that the next time we see him, he’s at the edge of a building saying goodbye to this life. Then, Saya shows up. Of course, the pretty young martial arts monster stops him from jumping by planting a cool, calculated kiss on the recruit. He agrees to go back to King’s Dominion and see what all the hype is about.

The kids who helped recruit him are waiting to give him the long story short intro. No disobedience, no drugs, and no sex. Oh, and if you ever reveal the school’s location you’ll be killed immediately. Welcome to King’s Dominion. Upon entry, Master Lin hits him with another stoic quote about what they do, and that’s “Give peasants the reliant skill to overthrow their corrupt masters.” He asks Marcus one mo gen. You in bruh?!

Marcus receives the wildest reading materials and weapons school starter pack in first-day-of-class history. He finds out the names of the kids who recruited him and heads to the deadliest classes ever heard of. By his locker, he meets the girl at the parade with all the face paint, and Maria puts the naive one onto a hard truth; you have to join a gang, or you’ll never survive in this joint. Unsurprisingly, Marcus sticks up for Maria and gets pressed by her man, Chico and The Cartel, then becomes the recipient of a Big Gulp sized high fructose corn syrup shower.

My man just fully saturated going to insane classes. A scene in Poison Lab shows us why assassins have no shame and can incapacitate or fade that ass in a moment’s notice. Maria and Marcus get Mr. and Mrs. Smith intimate in Hand to Hand Combat and this lil relationship is getting habanero spicy! Oh, and remember when Master Lin took a cane to that girls dome and turned her face into a mid-summer South Bronx open fire hydrant of blood? Yeahhhh, red blood cell Niagara Falls and the crew are in AP Dark Arts when that goes down. That’s around the same time Marcus receives a note that says, “You’re dead, Mutt” along with his first class assignment! Find someone who deserves to die and kill that mufucka…and prove that the deed is done. He decides to take out Rory, the homeless man who stole his family pic.

While in lunch, Marcus kicks it with young Johnny Knoxville, Billy, who breaks down the gang affiliations around King’s Dominion. You got the aforementioned Cartel killas, the Dixie Mob who are Nazi sympathizers, the lethal Kuroki Syndicate aka the Yakuza kids, and the Final World Order. It’s the 80s, so Marcus and Billy have to go on a quick rooftop smoke break, where he reveals his grand plan; he’s gonna kill Ronald Reagan, the man responsible for his misery. Not to mention, he finds out Chico don’t give a fuck about the whole no killing each other rule, and he plans to murk Marcus out after school.

He enlists Saya’s help who hits him with the chopped and screwed face like, why the hell would I help you? Shorty been a savage for so long, and she tells him that he was a simple mission and that kiss was but a tactic to get his ass recruited. Must’ve been honesty hour cuz he stops frontin and tells her his orphanage killer reputation is bullshit before spilling the beans on his life story. Parents were killed right in front of him, his orphanage was a torture zone, probable pedophile haven, and Chico wants his head for “helping” Maria. She keeps it a hunnit and is like, he’s gonna kill you fam. Run! So, he does…right into Maria who’s face and black eye speaks volumes, before sharing what Chico told her; that he’d do a lot worse to him.

Do You Even Stan?

Homeboy grew the biggest pair, runs outside, and hits Chico with the green lightning Deku superpunch!! Then got his ass beat accordingly. The heart he showed was dope to see before Master Lin broke it up, dispersing the ratchet little hype crowd. Attack the Block John Boyega is named Willie, and the new homie rolls up on Marcus and tells him to get his ass in the whip. Marcus wants to put Rory 6 feet deep, so they head to San Fran skid row to catch a body and an A+ on this assignment. But before all that, let me tell you how hard my man Willie goes for the X-Men: Dark Phoenix saga!! My man’s stan would put your ride or die game to shame!! You can catch him bleeding out from a Wolverine slashing on this Phoenix hill talkin all the shit reppin that comic. It’s a welcome comedic switch up from the deadly, stereotypical nature of this premiere episode.

They pull up on the homeless hideout and spot their mark. Willie takes aim aaaand can’t do it! Turns out homie is a pacifist. They get spotted and run until homeless Flash catches them. Willie was bound for Valhalla when Marcus came outta nowhere with the lead pipe, Streets of Rage style. The music and imagery cuts in and out until he makes the decision to bring that pole down on dude’s head, dealing a deadly blow, and ending his time on this plane. Marcus kills someone who deserves it, but how he plans to prove it is beyond me as they stuff his carcass in a dumpster.

Willie goes inside, but Marcus takes a minute before entering King’s Dominion. Maria slinks out of the shadows with a clear, beautiful face and admits she played him, but her feelings for him are real. She never had a real man. Chico never fought for her, and the homie did that more than once. He gets blessed with the 2nd kiss of the episode, and I hum Big Pun’s, Still Not a Player in my head!

Before the episode comes to a close, Saya enters Lin’s office and asks if he’s got her next mission. He doesn’t say anything, just places a chip of some sort on Marcus’s card. Only time will tell what it all means, but by the look on her face it feels like a kill mission. Make sure you check back in on next week’s Deadly Class recap as Saya’s new mission is revealed, and boy is it a good one!