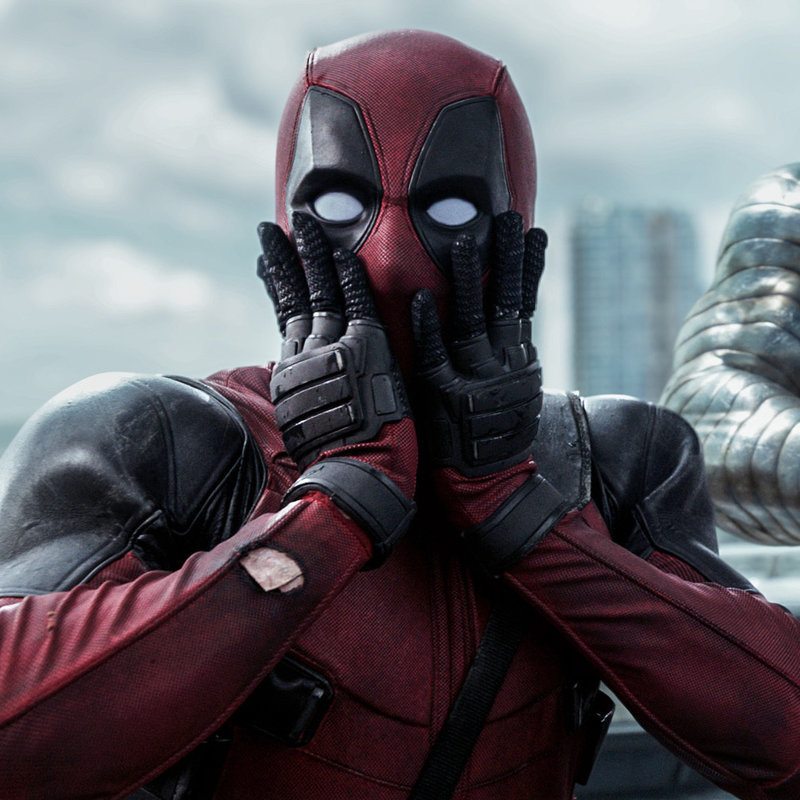 Late night is a diverse form of comedic television that allows the host and writing team to treat topics differently while distorting the “classic” format for their audiences. As a Black writer with a background in poetics, I find peculiar ways to tap into “my voice” as I study hosts and cultivate packets for submissions. While I was going through this week’s late night “briefing” I came across similarities between my favorite comic book character and one of my favorite Late Night hosts. Reading Deadpool comics and studying Patriot Act with Hasan Minhaj affected my approach to monologue jokes and gave me permission to approach honesty in new ways.

I know what you’re thinking…

Imagine, Wade Wilson — the most chaotic neutral Late Night host that ever existed. We’d love to see it. (Or, maybe it’s just me). Deadpool’s presence in comics, cinema, and video games gave me a way to use his personality as an outline for what makes a show dynamic. What I appreciate in the comics about our beloved Wade Wilson, is that across many interpretations and adaptations, the creative team appeals to the senses of the reader, but will whisk them away into a different image, smell, or emotion often without warning. That amazing feeling. Keeping the reader on their toes, and taking them on adventures that will seemingly go one place but then it takes various sharp turns with the danger of crashing at any moment. I feel the same effects from the Patriot Act creative team and their ability to use visual media and research to take fans on a journey — taking a concept or topic we may love and absolutely destroying it by the end of the episode. 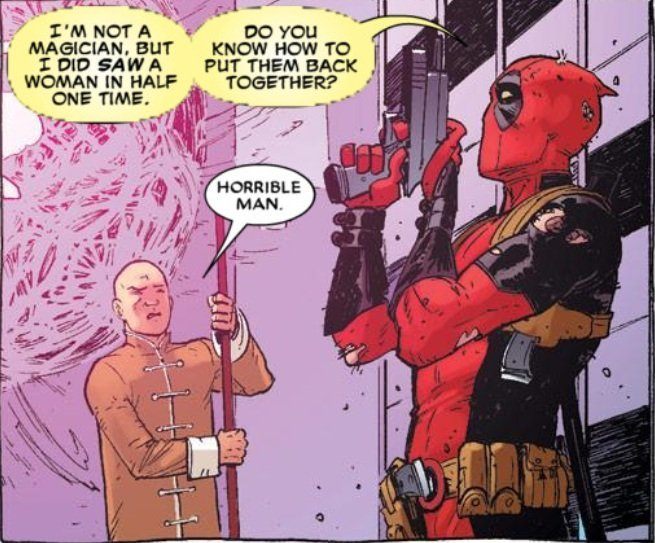 When I read Deadpool comics, I am prepared. I might have read the summary before I read the comic, might have seen a couple of preview panels but I know what’s going to happen. I’m about to step in knowing one thing, and look back multiple times and ask: “What just happened?” One of the most important aspects of comedy is the element of anticipation. Comedy explores the identity of power politics. Anticipation creates a middle ground for expectations. Sometimes audiences are able to anticipate jokes, and it reaps a reward, but what I love about Patriot Act and Deadpool comics is their mutual ability to divert the tracks of expectation.

Both Wade Wilson and Hasan Minhaj paint you a scene, then diverge you into a separate image that pushes the limits of absurdity. An example of this in Deadpool is in Skottie Young’s Deadpool #14, War of the Realms Arc. There we see Deadpool and “the knockoff super squad” battling against a terrorizing group of Gremlins. Deadpool’s usual reaction to trouble is: Kill everything, leave nothing behind. By the end of the comic, we see Wade in a business transaction making money off the Gremlins that weren’t killed, turning them into an amusement park attraction. (Remember these Gremlins still have the ability to eat people.) The power dynamic between the gore of monsters that eat people versus the innocence of amusement parks is a strategic comedy method that torments the ideology behind blissful ignorance. Deadpool’s social ineptness is a punchline that begins from the first glance of a panel. The stability from set up to punchline is not linear, and it keeps readers on their toes. 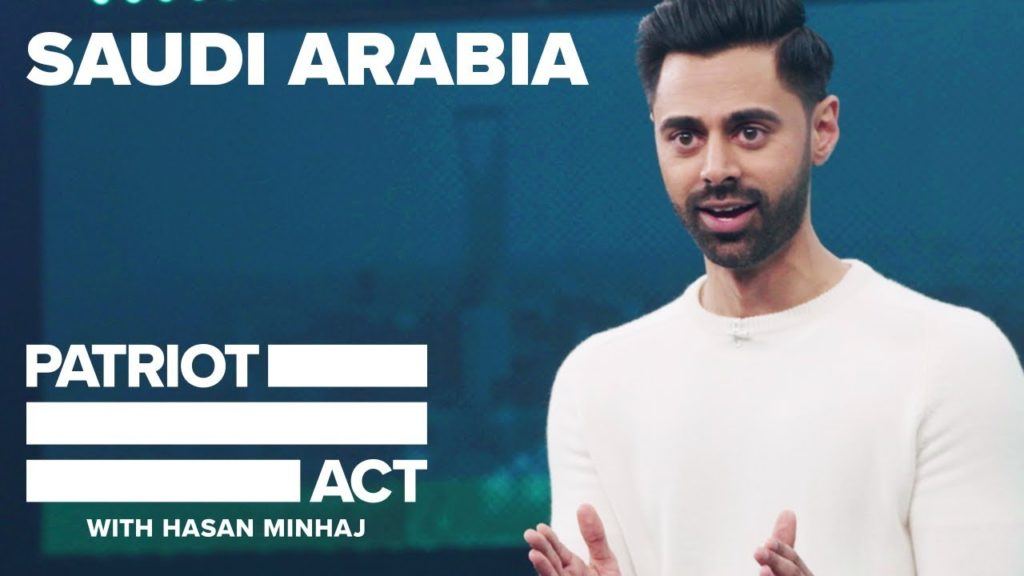 In Patriot Act, Hasan is at his most powerful when he brings in unconventional comparisons to the dark concepts he explores. Like many Deadpool comics, Hasan and his team of writers take a play on knowledge and press it against popular concepts in order to produce witty results. In season one, episode two, the controversial episode surrounding Saudi Arabia, Hasan delves into the United States’ relationship with Saudi Arabia without holding back the bars of accountability. In this episode, the topic of terrorism, and the United States involvement with the Saudi Arabian government, got a visit from a pop culture reference people normally associate with joy. An example of this is when Hasan stated: “Remember, America hates terrorists. Saudi Arabia gave them passports. Saudi Arabia was basically the boy band manager of 9/11. They didn’t write the songs, but they helped get the group together”.

The similarities that I enjoy from Deadpool comics and Patriot Act is that neither shies away from the gore, but rather accompanies it with something seemingly innocent in order to heighten the bluntness. When I see this tactic used in Late Night, it is utilized in a way of comparing people’s relationship to the public eye, but Hasan connects broader concepts to tangible visual objects and themes. The play on anticipation is that you’re captured with facts that reel you in, and then you’re derailed into a comparison that’s seemingly absurd, but instead feels like a parable.

Hasan and Wade Mock You with Words and Knives

Visual art has the ability to create different worlds for consumers and ignite an emotional pull by latching itself to the imagination. The award winning digital media team at Patriot Act utilizes images in order to create an immersive experience with their audiences. The audience has a relationship to the screen much like how comic book readers have a relationship to the color schemes on a panel. Images have the ability to inform characters of things they are not aware of, create gray areas, and plant emotional seeds for incoming events. When I read Deadpool comics, sometimes the comedy is hidden in the background, or it is expressed in the eccentricity of the kill. Blood is often accompanied with a chuckle, and that’s an important part in cultivating an experience for viewers. The words of Wade could easily be taken as something dark and pensive if accompanied by art that does not accentuate the words. In the same breath, with words in Patriot Act Hasan challenges the relationship the viewer has with the screen by moving away from simple picture in picture and allowing the screen to hold a broad space behind him. Much like movements through the panels of a comic book. Whether it is a graph or pictures of foreign leaders, many Late Night hosts could take example from Hasan’s innovative visual storytelling.

Through the usage of anticipation, the relationship to innocence, and visual accompaniment to aid in storytelling I believe that many aspiring comedians and late night writers can learn from the world of comedy outside of sketches and stand-up. The beauty of storytelling has different gray areas to explore that aid in not only producing laughs but also pushing people to learn about concepts in unconventional ways. I hope to see more interpretations of Deadpool in ways that not only challenge the way we see comedy, but how we perceive gray areas in relationships and self reflection. In Patriot Act I hope to see the creative team challenge the way we ingest comedy. Going beyond just words and quick graphics but creating a story and cultivating an immersive relationship with the audience while using different artistic media.