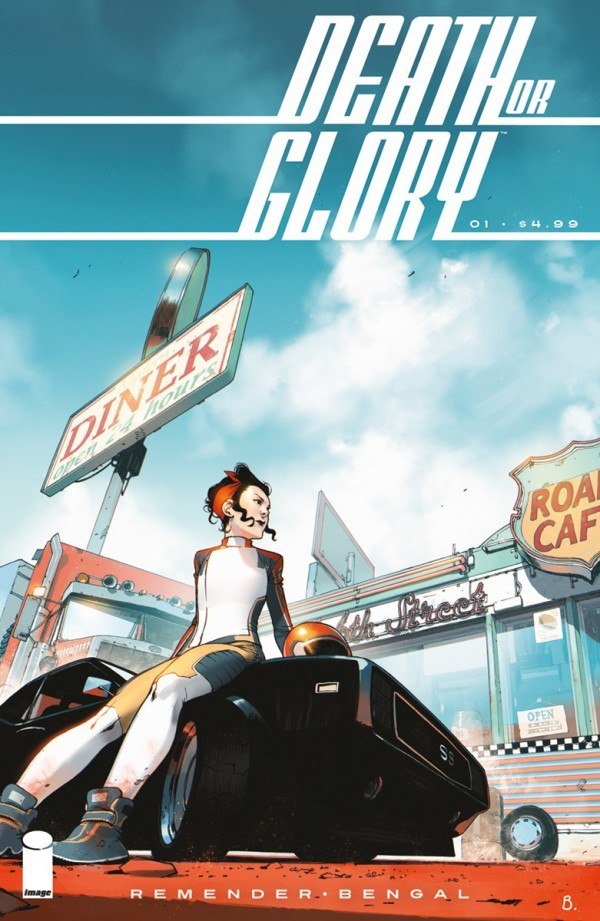 This May, Image is set to do what Image does best. New series. Roaring into stores, we get Death or Glory written by master writer Rick Remender and drawn by Bengal. With a little black science irresponsibly sanctioned by Image Comics, BNP was able to grab a copy of the book from the future. The book follows Glory, a grease monkey raised off the grid in a close knit trucker community. A downside to this unique brand of freedom arises as her father, Red, needs expensive medical care but lacks access to health insurance. Glory embarks on a dangerous adventure to amass the money necessary to save her dad’s life.

Death or Glory is a tragic romance at its core. It’s a love story between America and the vanishing lifestyle of the convoy. Like the cowboys of the 19th century, truckers have captured the American imagination as badass nomads, basking in the freedom of the open road. A similar aesthetic exists in off the grid, survivalist types. We’ve all dreamed of dropping off the face of the earth and living off the land and bartering; not tethered by a 9-5 job, student loan payments, or taxes. Death or Glory captures this dwindling fantasy perfectly.

Glory sees her life disappearing in the focus point of her father, representing the larger freedom of her rare upbringing. Remender articulates this sentiment masterfully. It’s actually one that he’s approached before. His powerhouse of a book from last year, Seven to Eternity dwells on waning freedoms in a fantasy setting. You can really tell that this portion of the American psyche resonates with Remender personally.

Speaking of resonance, Bengal’s art couldn’t interact with the story and theme any better. The lines are crisp and everything from the characters to the random corner of a bathroom ceiling to the side of a storage grate is expertly detailed. And the colors, the Goddamn Colors! If you didn’t feel the spirit of America oozing through the dialogue and plot you damn well felt it through the coloring. Glory is obviously sporting her red, white and blue jumpsuit on the cover but Bengal brought it to the next level. Death and Glory is saturated with hues of red, white and blue that simultaneously pop and blend. We get a scene with a character wearing blue jeans, a white tank top with red gloves and lipstick. There’s a bathroom scene with a white and blue backdrop of the walls against a bright red box. An action scene sports bright red mountains against a blue sky with the white smoke coming from a car peeling out. This is expert craftsmanship.

Books with story and art in such incredible lockstep are few and far between. Rick Remender and Bengal have created a masterpiece in this first issue of Death or Glory. If you are interested in the American fantasy of freedom or the lifestyle of the convoy you should have read this book yesterday. That’s right, you should have broke the laws of space-time to read this book. But anyone who loves an exciting, thoughtful story and amazing art should pick this book up when it arrives in stores May 2 of this year.

Reading Death or Glory? Find BNP’s other reviews of the series here.