Note: You might want to read my review of Bitch Planet #7 before you read my reactions that follow. Obviously… SPOILER TERRITORY UP AHEAD! Like we do with reviews of comics here, only snippets of the panels are shown, not the whole pages because 1) we don’t want to spoil all of the actual comic, 2) we still want y’all to buy a copy and support the folks who worked on it, and more so for this particular issue, and 3) I don’t want to spoon feed you the experience of reading these pages of this issue of Bitch Planet. This is how those panels made me feel. This is how those panels ultimately saved me during an awful week. This is another stunning example of how this comic stays serving up intersectional feminism.

What is Black pain? In what words would you describe it? What is Black suffering? What do you call the moments where you feel too defeated to get up in the morning, when you sit in the shower or tub and can’t find the “on switch” to jumpstart your day? Do you believe that art imitates life?

Within the week, I’ve had two deaths in the family, both women, and as “Death comes in threes” I’m waiting on the third. One was an auntie of mine who passed away on her birthday last Friday. She was someone I barely remember from childhood and someone I honestly haven’t seen in ten years or more. The other woman who passed was like an auntie. She grew up with my mother and her siblings, served as my first Sunday School teacher, and babysat me and my cousins often. She was a woman with a big heart. She was bigger than life and while she had health complications since forever, somewhere in my heart I always thought she’d outlive us all. She did not.

The first emotion that hit me when I heard of both deaths was shock. Apparently my auntie learned she had cancer very recently and told mostly no one. Then guilt. I couldn’t remember the last time I phoned or even left a “Hello!” on the Facebook page of the other woman who is in many of the chapters of my early childhood. Then anger. Because people will die and this is a fact. But cancer fucking sucks and continues to steal away people who we love and people we claim as kinfolk. And the world is a shitty place and we need all the positive people who make this place bearable and lovable…and when those people leave us here… it hurts. 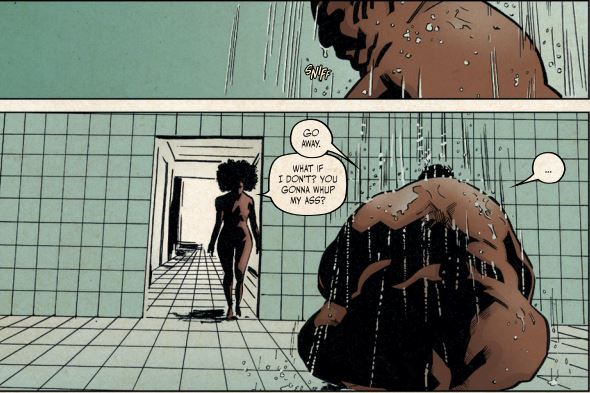 The panels where Kamau and Penny are sitting side-by-side in the shower and Kamau is comforting a very defeated-looking Penny are among the most moving panels in a comic book I have ever read. There is comfort present along grief. And it’s grief, it’s a pain that’s not going away anytime soon. Penny feels extreme guilt over Meiko’s death even though that death was orchestrated. It’s a death of a friend, a sister, a comrade no matter what little time they shared. And it’s a death that, I, as a reader also feel.

I’ve been in both positions — as Penny, slumped over, mentally in a bad, bad place where I feel like I failed someone, like the odds are stacked against me, like I can’t win no matter what. Yet, I’ve also been in Kamau’s position where I was hurting too but in a place where I felt ready to feel that pain, acknowledge it, and hold my hand out to the next woman in my life who needed it.

This is such a stunning, powerful scene — it’s everything I needed to see and read and consume this week. It’s Kamau telling Penny that they are alive and here, present. It’s Kamau telling Penny that like the last lines of my all-time favorite poem “Won’t you celebrate with me” by Lucille Clifton: that everyday something has tried to kill them both and has failed. Leaving the shower, Kamau reminds Penny that the person responsible for Meiko’s death is still out there. It’s a battle cry to get back into the saddle and prepare for battle, for war. 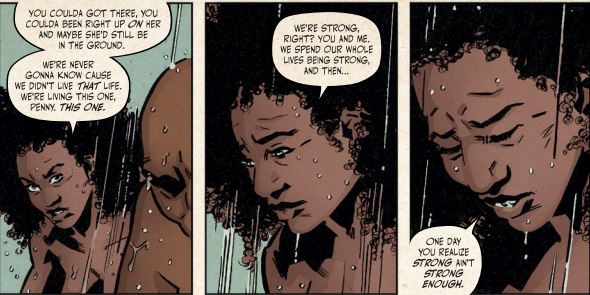 This scene is a great takedown to the atrocious “Strong Black Woman” archetype. Kamau’s words to Penny are:
[quote_simple]…We’re strong, right? You and me, we spend our lives being strong, and then… one day you realize being strong ain’t enough.[/quote_simple]

Not too long ago, a think piece by a fellow Black woman about her problems with the #BlackGirlMagic hashtag surfaced on the Internet, bewildering and angering many and receiving much backlash. I do believe that the writer completely missed the point of the hashtag. It’s a hashtag and a movement that serves to uplift Black girls and women everywhere because we live in a world where we are constantly attacked, belittled, and vilified. (If you needed a palate cleanser after reading her piece , I can point you in the direction of great writing of several Black women. Ashley Ford wrote a terrific piece titled “There Is Nothing Wrong With Black Girl Magic,” which I highly recommend.)

One of the main arguments of that piece is that such a hashtag robs Black women of being able to be vulnerable and accessible — it prevents us from being seen as human. It forces us to stay stuck in this awful Strong Black Woman archetype. After first reading through this scene of Penny and Kam I couldn’t help but think back to that writer and her words and with all respect, I couldn’t help but feel sorry for her. Feel sorry that she hasn’t been exposed to enough beautiful moments like this that dismantle that archetype. I can’t help but feel sorry that she’s blind to the power of this absolutely  powerful hashtag, created by CaShawn Thompson.

Deep down I’m hoping that while #BlackGirlMagic means different things to both of us, uplifting for me and problematic for her, one day it becomes just as inspiring and a place of love and support for her as it has always been for me. In contrast, the essay on the archetype written by Angelica Jade Bastién (favorite new writer!) on the back pages of this issue of BP was fantastic and even has a particular example of acknowledging how the Carefree Black Girl was limiting to her personally, but it doesn’t altogether dismiss it as a place of power and love for other Black women. That perspective fit so well into the end of the issue and gave valuable space to a Black voice.

I was talking to a male friend about comics and Bitch Planet came up in the conversation. He mentioned that while he read the first issue, it didn’t gain a spot on his pull list because he didn’t feel it was for him. Which is fine. Bitch Planet obviously isn’t for everyone. And I say this not as a side remark against his gender or sex. I know other dudes that read BP, love it, and dissect it like I do. Issue #7 was for me. And maybe you.

And perhaps even for the person who doesn’t even like comics or would make a passing joke about its title and dismiss it for something more “safe”, something more mainstream. If nothing else, Issue #7 was for me in showing me blessed representation of sisterhood, of Black sisterhood, of Black women comforting each other… of Black women being vulnerable and absolutely fucking worthy of love and comfort and all the good things.

This has been a shitty week where I’ve cried almost everyday. These panels from Bitch Planet #7 helped tremendously. pic.twitter.com/xRarY9TiDa