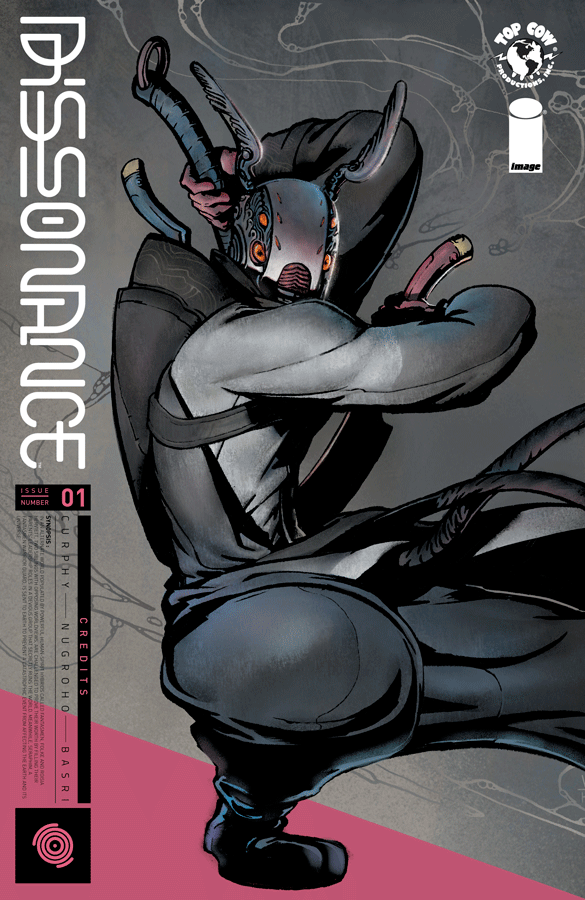 Dissonance throws a lot at you fast. Actually, it crams the entire history of its world into the first two pages. It’s all a bit overwhelming … at first. After getting through the world’s initial backstory, the narrative becomes easier to follow. However, it leaves you wanting for more. 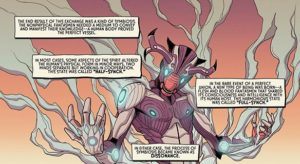 The premise of Dissonance is pretty simple. A technologically advanced race of spirit-like aliens called Fantasmen come to earth looking for something they are missing – the virtue of humanity. In exchange for this and the chance to stop the constant war on their planet, the Fantasmen offer knowledge. What form does this exchange come in? Dissonance, a fusion (unfortunately, not the kind that involves dancing) that permanently bonds together a Fantasmen and human.

Once again, this is all explained in detail within the first few pages of the issue. And after what seems like centuries, both worlds seem to benefit from this collaboration. My biggest problem with this is that it’s not all that believable. I’m somehow supposed to believe that Earth, the planet where countries are ready to square up over the pettiest of issues, is gonna teach a more advanced race how to stop fighting? Nah, son.

Another issue Dissonance runs into is distinguishing the behavior and personalities of the different races. From what we see of the Fantasmen, Humans, and those who have undergone dissonance, the three groups act pretty much the same. The two characters that are notably different are Folke and Roisia Herviett, our leads. These siblings are best described as polar opposites and lead a super shady Illuminati-type group that controls everything from behind the scenes. For any fans of Avatar: The Last Airbender, let’s just say that Roisia is giving off serious Azula vibes. It will be interesting to see how the duality between the two play out down the line. 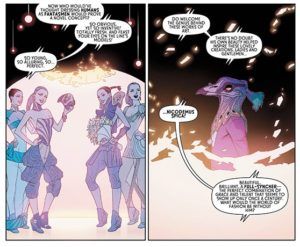 Thankfully, Sami Basari’s clean artwork makes for some awesome visuals. It’s actually the first thing that caught my attention. He does well to make sure that no two Fantasmen look the same and that the design of each character that has undergone dissonance feels unique. Most of the issue takes place on a semi-futuristic earth, which looks like your standard utopia with lots of curves and calming colors to the architecture and technology. Hopefully, the story will begin to show us more of the Fantasmen’s homeworld.

I feel like I came crashing into this book head first, stuck in the middle of an ongoing story rather than the beginning. The seeds are sown for some potentially interesting plot elements but altogether it’s not as captivating as I hoped it would be.

7 Super Shady Illuminati-Type Groups out of 10