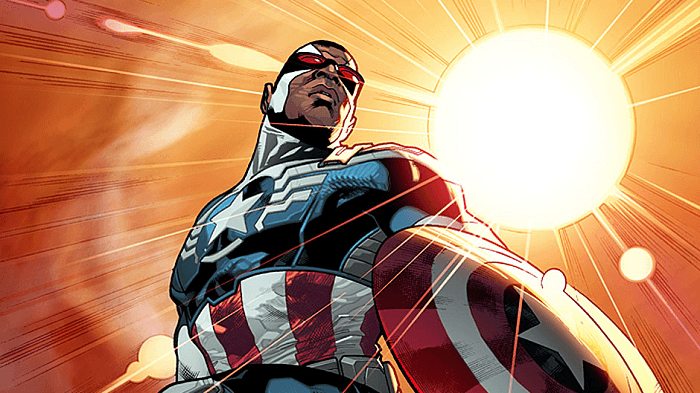 Well, I guess my work here is done. I suppose I should elaborate.

First I’ll give you the background: On two separate occasions this week, Marvel made announcements about two of its most visible characters. The first announcement was that Thor would become a woman in the comics in the near future. Then, if that didn’t rile people up enough, on The Colbert Report on Wednesday night, they announced that the new Captain America will be Black Superhero Sam Wilson aka Falcon aka…

The shorthand reasons for this: A story arc in the Thor: God of Thunder Book will leave the present Thor “unworthy” to wield the God Hammer Mjolnir and someone else, a woman, will step up in his place. I do think that Jason Aaron and company could’ve been a little bit more clear in the delivery of this news compared to the ambiguous “Thor will become a woman” as I doubt they mean that the present male character that is Thor, son of Odin will physically become a woman, daughter of Odin. At least I don’t think so (which too, could be very interesting to me). Though I am glad that our new character will not be named Lady Thor or She-Thor or some shit like that.

As for Captain America’s shield changing arms, the super soldier serum that has bulked Steve Rogers up to mythical physicality before has been extracted from him and the fact that he’s like 96 years old, catches up to him. Unlike the confusion with Thor, Captain America actually is a title, so that means the mantle can be taken up by another pretty easily. Enter Sam Wilson.

I’m not even gonna deal with the racist or sexist bullshit because one…I’m tired. And two…my man 50 grand, Oz Longworth already addressed accessibility in an excellent column earlier this week. So lets start with the cynicism of these moves. Already (as expected) many comic book fans that aren’t mad at the changes are saying that these are temporary ploys to increase sales to appear diverse. First of all…good. This isn’t McDonalds filling their commercials with black people just to market the same shitty food deeper into the black community. This is an actual change, no matter for how long. Thor (or she who is worthy) is really going to be wielding the hammer and it doesn’t matter if that’s for two years or the rest of time. It’s happening and the fact that its happening will have large repercussions on the Marvel Universe because Thor is such a large part of it. Not knowing who will inherit that title leaves a lot of speculation out there for who that would become and I do hope that it is a new character altogether and not like Carol Danvers or something (CAROL IS PERFECT WHERE SHE’S AT, LET HER BE). As for Captain America, this isn’t new ground as the title has passed from Steve before when Bucky Barnes took over after Marvel’s Civil War story-line. Steve came back and wore the shield on his back again eventually, but it forever burned Bucky Barnes as important part of the Marvel Universe beyond his Winter Solider persona. Obviously this is different with Sam Wilson as a Black character will be the symbol for American heroism in Marvel’s world. Let’s not pretend that’s not a big deal.

And that’s the point people. These things become canon. These shifts elevate these characters beyond their current station and even if the titles these two heroes will brandish revert back to their original owners, their “floor” as a character as far as popularity will never dip below a certain level now. It makes it easier for them to get their own books, lead their own teams and possibly (possibly) their own movies.

Which brings us to the other cynical detraction from this: It means nothing for the Marvel movies currently. And this much is probably true. Chris Evans as Steve Rogers / Captain America is a marketer’s fantasy. Likewise for Chris Hemsworth as Thor. Both are signed on for multiple film contracts beyond the as yet released Avengers sequel so we’ll be seeing them in those roles for a while even if the comics don’t reflect that. But I would counter with, even if those movie roles stay in tact for the next five years, nobody plays the same role forever (except Bruce Willis as himself). The optimist (and he is oh so very small) in me reasons that whenever these guys get tired of playing these roles, that there is at least the possibility that Marvel won’t try to cast the next generations version of them. Now they have options beyond just race or gender bending the character (which also, not a bad idea). But if we have a Thor movie in 2019 that stars a woman, Marvel has just lessened the fan boy blow back on them because guess what bastards…its canon.

So can I talk about what’s awesome about these moves and why they matter? It sets precedent. Everything can be tinkered with, even the most symbolic of characters. While that will drive some purists crazy, its not gonna drive the girl who falls in love with a Thor that looks like her, crazy. It will be just fine for the black boy that assumed they wouldn’t look write dressing up as Captain America for Halloween. Slowly but surely, each move like this expands the fan base by making it more inclusive while pushing the bigots that dominate nerd culture back into their holes. Or, drags them kicking and screaming into the now. That’s something we should all be able to get excited about.

And my last note: Marvel doesn’t HAVE to do this. When we typically criticize comic books for lacking diversity, here’s a hint, we’re not talking about Marvel. From Ms. Marvel, to Mighty Avengers, Young Avengers, X-Men’s main book and so on, they weren’t exactly having a crisis of representation in their offices. That would be across the street at DC, who gave us a character buried on a lesser Justice League squad (Equinox), Batwoman not being able to marry her female lover and a Black Superman…in Earth 2. If anyone needs to do some “pandering,” I would start with them.