As with a lot of Hickman books, the narrative of East of West has spread itself horizontally a lot more in year two. That has at times been fruitful with the outstanding issues with Babylon AKA The Beast, but this current thread concerning Doma Lux and her ties to the House of Mao have dragged on a bit. Which isn’t to say it’s not interesting. The secret affair and the chess game that has been at play between Doma and the Widowmaker is fascinating in its own right. We might have wandered what the purpose or agency of Doma planting a bomb in the old man was way back in Issue #12 and we get some of those answers here. It’s not that this isn’t a cool revelation, it’s that it fits into a story that isn’t really travelling anywhere yet.

The extended look we get inside the Machine City isn’t all that fascinating until we leave it as their leader Narsimha seeks some council at one point. It has the lone kinetic scenes of the book and also connects a few more loose threads for us as far as certain characters’ importance in the world. The revelation though? More set up. No pay off yet. 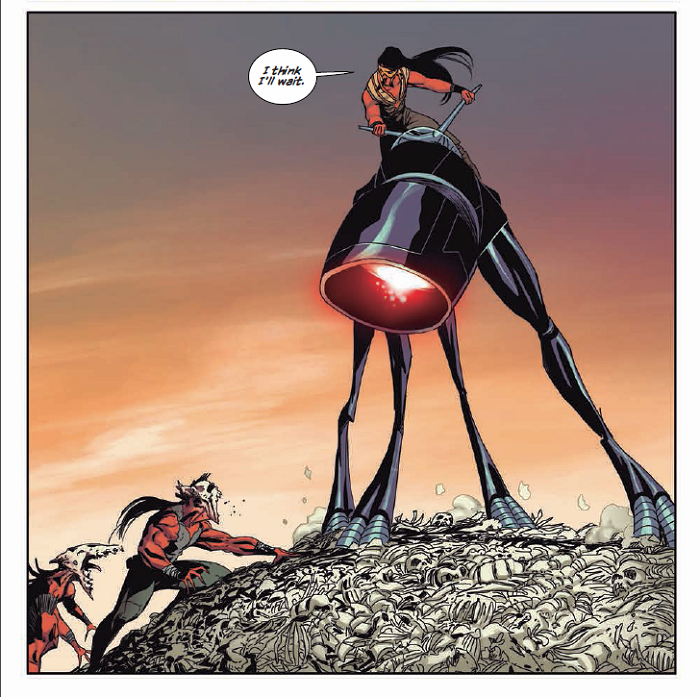 Nick Dragotta does another marvelous job whether it is the innovative story telling element near the beginning or the brief voyage through the Sea of Bones and the infamous meet up. The scale and treachery that he captures is top notch and never lets this book feel like anything other then a thorny epic.

East of West is playing the long game right now by bringing more relevance to little-known characters. It’s a mixed bag, but to be honest, it’s a Hickman mixed bag, which elevates it over other table-setter issues. However, the longer we get away from Death, the Horsemaen, or the Beast, the more this story begins to drift into something far less engaging than the one we were introduced to.