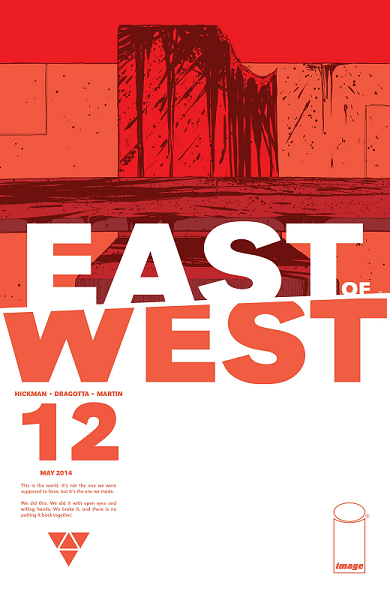 East of West as a series isn’t a perfect comic book and those that complain that Hickman is in constant world building mode will feel validated when we are given yet another person of relevance in the story to keep track of. However, some of the seeds that he has planted in previous issues make a big impact in this book and there is unquestionably a heavy momentum for what may be the main objective for all the characters that don’t happen to be a rider for the apocalypse. Speaking of which, the four horsemen are completely absent this issue, including Death himself. While I understand the focus of the summit between ruling nations for this issue, it wasn’t quite strong enough where we didn’t need to see how the apocalypse was coming along or where Death is at in his search. Still, what begins as a pretty wordy albeit interesting war of words (as you would expect most summits to be), quickly turns chaotic thanks to some some treachery (which, you should also expect).

The introduction of the Nation and their contribution was a pretty cool variable to the factions we had previously been introduced to (even if they themselves add to the wordiness). And as always, Dragotta’s art steals the show, as he flexes between the standard, calm dialogue to bloody, chaotic and disturbing so seamlessly.

East of West can be frustrating at times with its exposition and lateral movement, but this issue has set things in motion that cannot be stopped or deterred, while making all the subsequent characters that much more interesting moving forward.