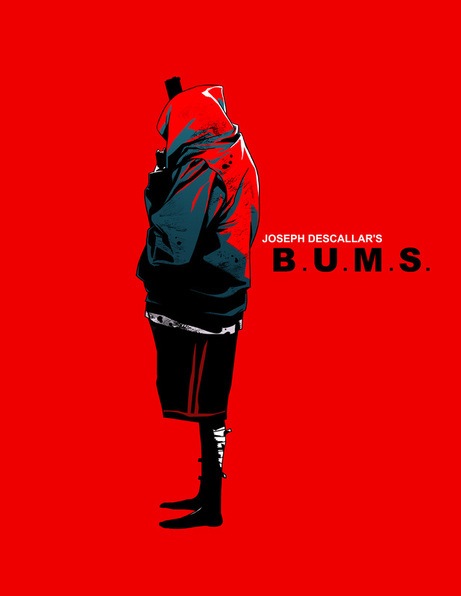 So, a little bit of background context is needed. Leading up to ECCC, I wasn’t sure how I would cover the convention. Would I write up a summary of the weekend? Would I highlight the best panels? I had no idea how I was gonna do it, and then I got an email from Image Comics asking me if I’d like to interview any of their available artists. That’s how I got the Infidel interview. After that, I thought maybe I should try to score some interviews from across the con.

It was a good plan, but there was only one problem: I’ve never interviewed anyone before. That’s where Joseph Descallar came in. I met him back in September at Rose City Comic Con. I was enamored by his style and his use of colors coupled with striking settings. His comic B.U.M.S. is an action-packed, visually driven story about the mysteries surrounding the homeless.

We’ve since worked on a short comic together for Ghost City Comics. I knew he was gonna be in Seattle, so I asked him if I could warm up on him. And he was totally cool with it. This was on Friday before it got too busy. We walked from his table to an open area where people were taking breaks and eating snacks.

Morgan: When did you decide that you wanted to make comics?

Joseph: Well, I wanted to tell stories. And I felt like drawing was the only way that I could do that because that’s what I’m good at.

M: Tell me a little bit about B.U.M.S and the inspiration behind it.

J: I went to art school in San Francisco. And Powell Street or Union Square was where my building was located, and so every time I would come and go, I would take the Powell Street BART, and I would see a lot of homeless. And you know, people would always ignore them. But me, wanting to tell stories, I pictured them as part of this underground society. San Francisco is kinda boujee, and there’s this separation gap between the boujee and the bums and I wanted to play with that dichotomy. All the tech companies, all the gentrification. I wanted to tackle the issues on the other side.

M: Is B.U.M.S. an acronym for something?

J: No, there’s no acronym for it, but making it look like that adds to the mystery. It’s the same thing with like Seal Team Six. It’s just a Seal team! But they added a Six in there to make it look like there were a lot of teams!

J: I don’t buy comics as much anymore. I used to read a lot, but as far as artists go, LeSean Thomas. He used to work in comics. Arkanium, I grew up reading that. Skottie Young, Joe Mad. A bunch of artists like that. Outside of the comics industry, I’m really trying to learn a lot about cinematographers. I really like Bradford Young’s stuff. And Roger Deakins, man. He’s a crazy cinematographer. I learn from that stuff a lot. Films especially.

M: That’s something that lends to comic book creating, too. I had a teacher in college that said a film with great cinematography means you can pause it anywhere and hang up the frame like a picture.

M: So how is it working the con circuit?

J: I always compare myself to like, a comedian on the road. You know? Just trying to put myself out there. It’s a build up to get your name out there. I’m just excited to be doing all of these shows.

M: My favorite part of B.U.M.S is the scenery and the setting. You really capture an aspect of San Francisco that you can only understand if you’ve lived there. What is your favorite part about illustrating B.U.M.S?

J: My favorite part of the illustration process would be capturing the whole Bay Area. Representing what The Bay truly is. People think The Bay is all tech, Financial District, and all that. Tourists don’t really see the city how it is. With the Tenderloin, the BART stations, Haight St., all that.

Joseph Descallar made for a great first interview and I was happy to meet up with him again. I got some insight into his amazing artwork. Check it out for yourself. You can buy B.U.M.S. on Comixology, where the first two issues are available. Give Joseph a follow on Twitter and Instagram too!