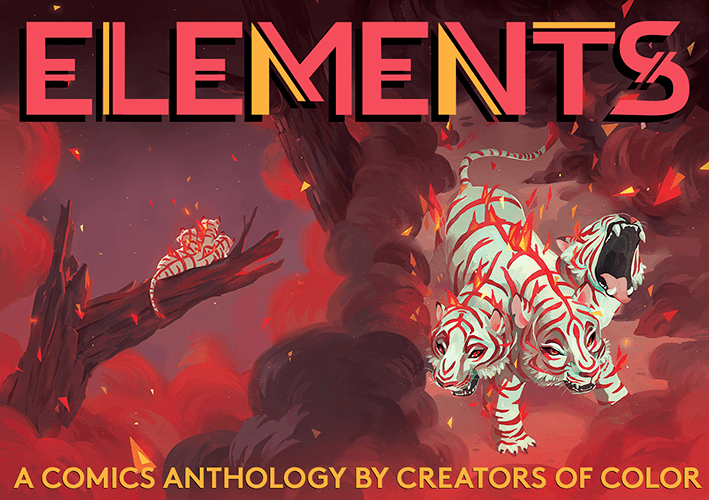 As the weekend progressed, and I had more time to survey artist alley, I found myself at James Wright’s table. He’s the writer of Nutmeg at Action Lab Entertainment. I was so impressed by everything at his table so I basically bought it all. That’s where I got the Elements: Fire anthology. I was impressed by the design and the smell of the book. Yes, I may not judge a book by its cover, by I damn well judge it by its smell. Couple that with the fact that this was a book edited by a woman of color featuring creative teams of color, meant that you could color me intrigued.

James then suggested that I should go speak with Taneka Stotts, the editor of the book. So I went over the next day after reading through the book a little bit. This was Saturday, the busiest day of the con by far. It was nuts, fam. We walked from her table into an apocalypse of people, looking for a sliver of space to conduct this interview. We found a nice little corner close to the soundstage where people were setting up to perform sets of music.

Also, I’m just now realizing that I asked the same first question to everyone that I interviewed. Ooooops.

Morgan: Give a little background for anyone who may not know who you are.

M: How long have you been in the comics industry editing books specifically?

T: For editing books, I’ve probably been doing comics specifically for about five years. I’ve been in comics for about eight years. I did Web Comics first. But I also feel like I’ve been a pro in comics maybe for like the last three and a half years, or what the Eisners consider to be a pro. 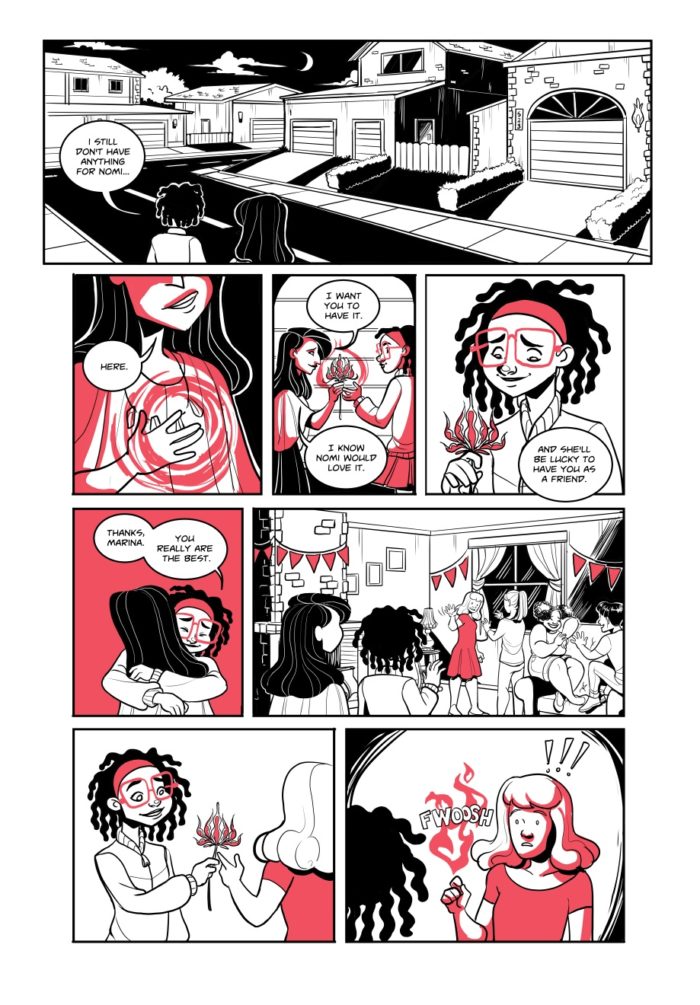 M: So you did Kickstarter for Beyond and Elements?

M: What would be the biggest difference editing from a big publisher as opposed to doing it on your own?

T: The biggest difference between publishers and indie publishing is mostly how our pay scales work, how our distribution works and also just in general, how much availability our books have outside in the open source market. That difference being that we don’t do direct market. We do more indie mom & pop shops. And we also get together and make our own list. We not only attend conventions together in a group, but cooperate with each other to put together a store list so that when someone buys one of our books we can promote another book.

M: So this is the definition of a leading question, but what made you want to pursue avenues in self-publishing as opposed to mainstream?

Con Security: Hey, sorry to interrupt your conversation, it’s just that this is a maintenance hallway, but if you could just move to the side right here, you can continue talking.

We move to the side.

T: Alright, I know where your leading question was going. I make independent comics because I’m an independent Black queer femme who exists within this macrocosm of very white narratives. So, therefore, I like to take non-narratives and apply them to all comics, therefore, giving the freedom of individuality and—

We are then interrupted by a loud electric guitar rift coming from the stage.

We leave the area completely and walk through an ocean of people, looking for a plot of empty land to finish the interview on.

We end up by the bathroom.

T: So again, independent comics for me started because I’m an independent queer Black femme who exists within this society and because the needs of having this structure or these people who exist within comics doesn’t exist within other media forms like music or poetry. It was very strange actually, coming from slam poetry and writing towards comics, which I felt was a medium built on creativity and collaboration, and finding that it was very segregated in a lot of ways. A lot of the original conventions I went to were very white-washed and same-faced and therefore I felt that to empower others you just have to do things and others will follow, create their own new and find their own footing. So, you don’t just inspire people. Sometimes just being there, existing, just gives them the desire to do the same and that’s all that’s necessary. 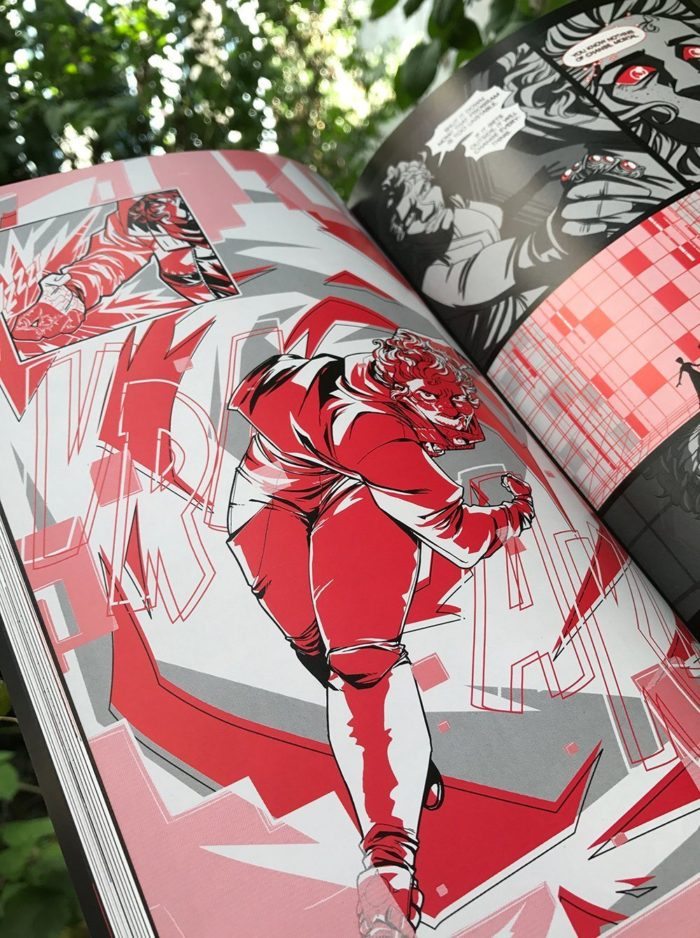 M: The design for your newest book Elements: Fire is really distinct. It sparingly uses the color red in an otherwise black and white book. And it’s consistent throughout, tying these unrelated stories together in their aesthetic. Was that something that was planned from the beginning, or did it just happen organically?

T: That was deliberate. However, I will take this. It’s a Pantone. I told the creators I wanted to do a Pantone book from the outset and I gave them the theme of fire. The Pantone was supposed to be the collaboration, the cohesiveness, throughout the collaboration to make all the stories kind of feel like they had the same soul. So fire is passion, desire, hate, love. Everything that we can think of to culminate it. So for me, that color finished and finalized the feelings that I was having for the book. But everybody utilized and interpreted them in a completely different way, from using it as the base of the line art to using it as the actual core of the characters, the shading, the wording. That was all up to their own discretion. There was no guidebook or anything like that. It was literally “Give me your comics and we will go from there.”

M: How did you assemble the creative teams?

T: I always do open submission processes with my books. I’ll invite about 10-15 people. An invitee is the same as a submissioner to me. You still have to have an idea that is the same level as somebody submitting a story to me regardless of your invitation. I don’t take everybody. That’s the point of an editor’s job. To edit and to make sure that the book is going to be a slam of a masterpiece together and that everybody’s stories will ride together. So for me, it’s just the basis of having them available and letting everybody interpret the theme the way that they wanted to. Getting the rest of the team together, I brought back the Beyond Anthology team to do Elements. As far as, like, production and pre-press and proofreading. Those are other very vital and important steps other than just being an artist and a writer.

M: I’m comin’ heavy with them leading questions. With Beyond, there’s a sequel that just came out: Beyond II. So I’m assuming since the name of this book was Elements: Fire, we might be getting some other elements…?

T: Absolutely! This summer I will be announcing Elements: Earth because after the fires cool, new lands rise and new earth springs forth. We’re looking forward to taking another direction. Reclamation, regrowth, reclaiming everything that was once ours and now will be taken back as ours. So I’m looking forward to just going forward with it and bringing you a whole new slew of awesome and amazing creators. People of color again from around the globe be it Sri Lanka, be it Australia, they’re gonna be in my book.

M: And this team is already set?

T: Nope! Open submissions, same as usual. Everything’s the same. There’ll be a new invitee list. One of my rules is if you’re in my first book, you kind of don’t get re-invited to the second book. I wanna make it so it’s available for everyone. So everyone feels that they have a chance. While I have people that I do work with on a general basis, they have other projects going on, hopefully, because they’ve been in our book they have many more.

As I often say, stuff like this needs to be supported. It’s people like Taneka who are the real trailblazers of this industry, doing things their own way instead of waiting to get the opportunity from others. Pick up Elements: Fire  here and show all your friends.

Be sure to check out Taneka on Twitter and see more here.