I love rogue-likes and rogue-lites and pretty much any sort of game that has elements of short term problem solving and long term mastery. I love going into situations with a minimal idea of what to do and slowly learning the optimal pathing. Then, several hours later, I am using the newly acquired mastery to experiment with an even more optimal ideation.

I love Hades for its deep narrative and how the process of dying over and over was a key component to the story. I love Slay the Spire for the endless niche interactions and balance and how each and every run requires different decisions. I love FTL for the different approaches and difficulty, and Into the Breach for being a deterministic game of mecha-kaiju chess. I kind of enjoy Dead Cells, although that’s because it’s much more action oriented, and I have poor dodge and shield cadences. And I say that to say that I love the genre and why when I see the words “tactical roguelike,” my eyes light up which is what happened when I saw Evertried.

Evertried from Lunic Games / Danilo Domingues (published by GANGEN Entertainment) is a new roguelike where you play an unnamed spectre slowly climbing their way out of the afterlife. With the simple prompt to “ascend,” you take your scythe and slowly work your way through the game.

Much like other roguelikes, the narrative is mostly told through background lore and an extensive encyclopedia, as well as one-of random character interactions. The stylization of the game is wonderful with gorgeous sprite design, a fun soundtrack, and perfectly ethereal set pieces with five different biomes. Each biome is ten levels with a shop mid way through and a boss at the end. But we don’t play roguelikes for story, we play roguelikes for game play, which is where things faltered just a bit.

Evertried is played on a simple 7×7 isometric grid. Your warrior starts in one position and different enemies and traps populate the field and they move when you move. The AI is exceeding predictive leading to pseudo-determinstic control of outcomes, although every once in a while you’ll stand in a tile that has some unexpected effect that affects the cadence. When the game first starts, you only have three actions, a single step, a dash that moves you two tiles, and an attack. Eventually, you’ll unlock skills and modifiers that requires some combination of Focus and Charge to use. Charge (for the most part) is built up by taking single steps after which you can spend it on unique skills you get from the merchant. Focus on the otherhand is what makes Evertried… Evertried.

While you can take as much as you want examining the board, Evertried heavily incentivizes aggression as hitting enemies raises your Focus bar which in tern increases how many shards (the in-game currency) you get and also whether some of your modifiers actually work. Of course, the game doesn’t tell you how important Focus is unless you pause and inspect your character. This led to a fun little learning curve when I expected an attack after a dash to one-shot an enemy, but the modifier wasn’t actually active and I lost a run as a result.

Between phrases like “active modifier” and “skills from merchants,” there is definitely roguelike in the DNA of Evertried; however, in practice, the game feels much more akin to a puzzle game than anything else. Given the set, identical intervals which you receive your power ups and your limited Charge pools, the early levels of the game play out very similarly. Without a more transparent overall meta-progression, it’s hard to feel like you’re truly gaining power. Skills do level up and transform, but it takes a long time to do so and lends itself to sticking with familiar kits. The majority of the game will be predicated on your understanding of enemy AI, situational awareness, and utilizing the environment which results in the early biomes being done by rote.

I think Evertried is a good game. It has a nice, easy point of entry with enough toggles to keep things interesting, but it’s also a game that I can only realistically seeing myself clearing once or maybe twice. The tactical puzzle elements and aesthetic are appealing, but it’s a little light on the roguelike elements I hunger for. 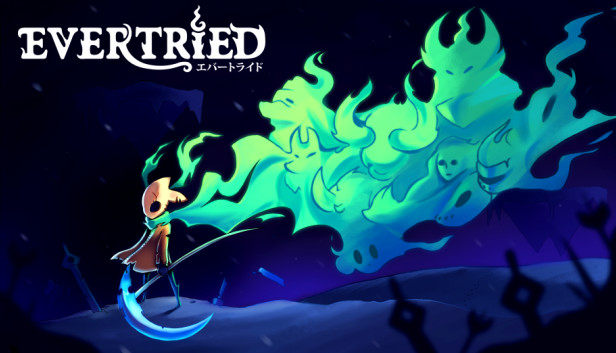