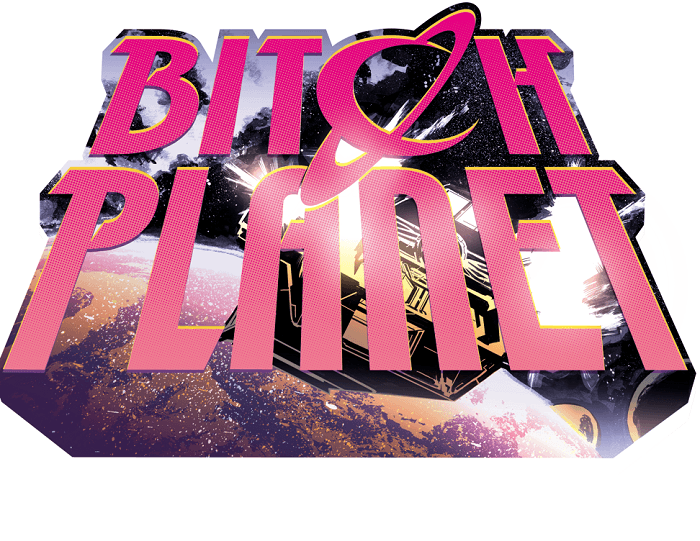 There is a page early on in Bitch Planet where the women prisoners are ushered through processing like soon to be slaughtered cattle. They are completely naked with no convenient art direction or obstacles to block their nudity. While most of the women are clearly uncomfortable to be made into such a spectacle, there is one character, Penny, who seems to revel in other’s discomfort. She is large, very large. She moves with a confidence that almost implies she’s there voluntarily, gives the guards shit just because she can and by the time you’re halfway through this first issue, you’ll realize she doesn’t give a damn about how uncomfortable you are staring at her naked ass. This is Bitch Planet, the house that Kelly Sue DeConnick built and it’s not like anything else on comic book shelves today.

Working with artist Valentine De Landro (X-Factor, Marvel Knights), Bitch Planet is a story about a not too distant future where women “criminals” are sent to an all women’s prison…on another planet. I put criminals in quotations as some of these women may be guilty of murder or thievery and some of them may be guilty of being women. The individual stories of who these women are and how they came to be there is part of the reason why this comic can go in so many different directions. As I said previously, Bitch Planet looks like it will be different than most books out, even as it comes from Image, publisher of another of DeConnick’s largely innovative books. That doesn’t mean that DeConnick doesn’t draw from various inspirations, especially prison break and exploitation films like CAGED HEAT, FEMALE PRISONER #701: SCORPION and VICTORY.

[quote_simple]”I wrote a letter to Valentine and just asked him to make the deal with me that unless a character was specified as white, they would be of color. I was hesitant… my concern was that we’re doing a prison book, and so of course most of our characters are incarcerated. And I worried about what that choice said. Was I working against my own intention?”[/quote_simple]

DeConnick’s hesitation isn’t without merit. Even in the world of comics, sci-fi and fantasy writing, tropes and stereotypes can still have profound impact on a community that still struggles to find itself represented at all, let alone properly. Especially women of color. This wasn’t lost on DeConnick as she states she did plenty of “soul searching” with De Landro and former editor on the book, Danielle Henderson. Ultimately, she felt that not confronting this complicated manner was her being “a giant coward.”

[quote_simple]”Truth is, I was hoping that if I reversed the white default THROUGHOUT the book — not just in the prison — I would then get the kudos for having been progressive without actually having to put my neck on the line and address real issues of race and incarceration. But women of color ARE disproportionately incarcerated over white women. It’s not a stereotype, it’s a *fact*. Women of color are marginalized and criminalized and instead of trying to deny that, we should confront it. We should think about and talk about why that is. What are we doing to ourselves and each other? How can we use the funhouse mirror that is fiction to look at the relationship between color and class? What is this cultural sickness we have around race? And what can we do about it?”[/quote_simple]

Having a voice that challenges the patriarchal norm isn’t anything new for DeConnick, who has become a feminist icon in the comic book industry and beyond, but she is still learning how and where to enter the conversation as it pertains to race. Having recently met the civil rights legend, Representative John Lewis in Atlanta, she was left with a perspective that continues to evolve. He spoke to her about arm chair activism and how Facebook Likes and petitions just aren’t enough.

[quote_simple]”You’ve got to put your body in it, he said. That’s been bouncing around my head ever since. I haven’t done my part. I haven’t put my body in it. But maybe this is a start. I am a work in progress.”[/quote_simple]

As this is a story focused on prisoners, I asked DeConnick how she maintains a level of heroism or likability for characters that may start off as morally compromised for the reader. “They’re more heroes like the rest of us,” says DeConnick. “Works in progress. Imperfect motives, imperfect outcomes.” I assumed that it would be difficult to navigate through some obligation or pressure to make the characters sympathetic in some way, but DeConnick’s connection to the women have eased that process.

[quote_simple]”I love them all, so I don’t have any problem making them sympathetic! It’s much harder to make the people in power sympathetic.”[/quote_simple]