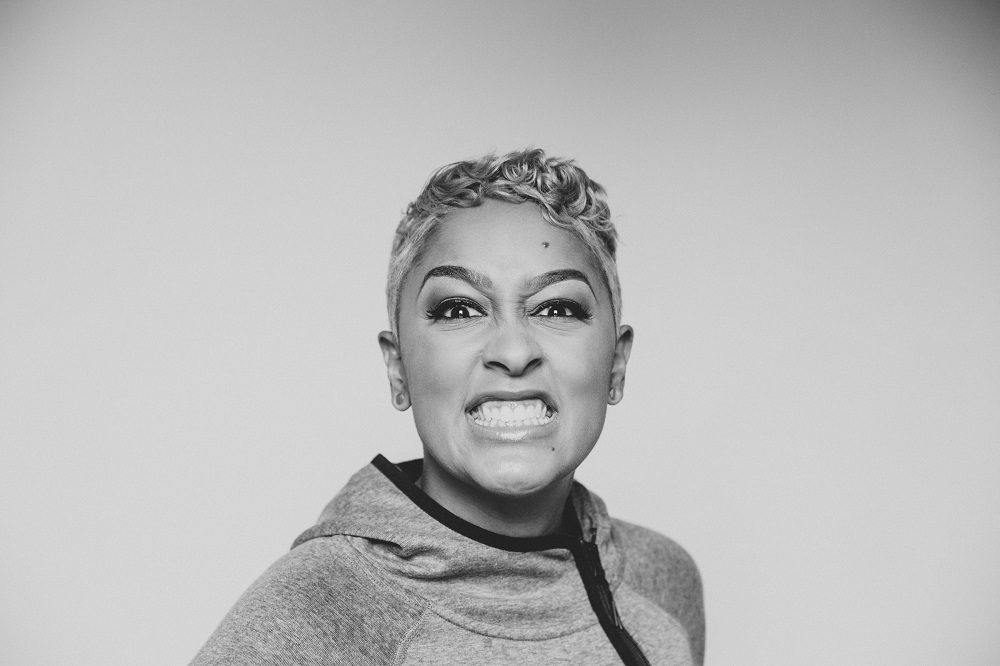 When Brian Michael Bendis’ run ended on Invincible Iron Man and no solo series was immediately announced for Marvel’s new favorite daughter, Riri Williams, the Black nerdsphere got nervous. All we needed was a little patience because Marvel had something cooking. Last week it was announced that acclaimed scholar and author Eve L. Ewing would be stepping into the power armor and penning Riri’s first truly solo titled Ironheart later this year. This continues Marvel’s recent practice of acquiring acclaimed writers outside of mainstream comic book writing to script some of their most iconic characters of color. We, like many people saw this as a perfect match months ago when Bendis announced his departure and we were lucky enough to get an exclusive conversation with the artist carrying Riri into her next journey.

Black Nerd Problems: You’re stepping into the legendary steps vacated by Brian Michael Bendis, someone that can reasonably be credited with the modernization of Marvel comics at the dawn of the 2000s. Ironheart specifically was the last character he created for Marvel before taking his talents to DC. Can you summarize your feelings of not only getting to write this instantly beloved character, but being the first person to write Riri in a solo book since the creator? 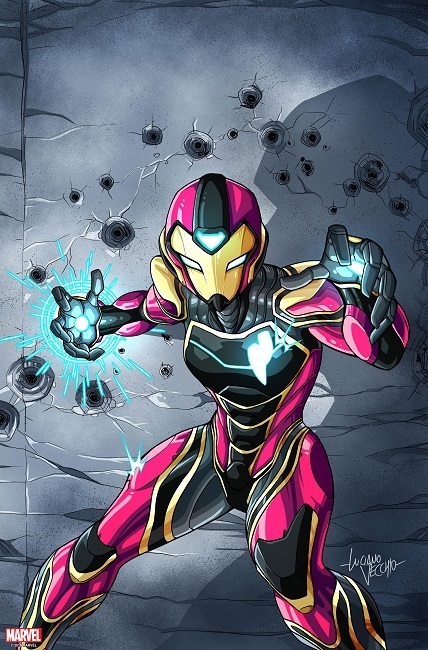 Eve L. Ewing: It’s such a huge honor. To be honest, it’s a really nice sweet spot for me as a writer. Riri has some substance that she comes with– her run in Invincible Iron Man, and her more recent adventures in Champions— but she doesn’t have the decades of weight, canon, and legacy that come with a more established character. It gives me a lot of room to play and make fun and meaningful decisions about the character while taking advantage of what other visionaries before me have done. Since it’s her first solo title, for me the primary task is to figure out ways for her to shine and really define herself– not in terms of Tony Stark’s mentorship or in terms of an ensemble cast, but on her own. I’m glad you see her as instantly beloved! And I’m so moved by the way people have received her and celebrated her already. But the challenge as far as I’m concerned is for her to earn that love. I want someone to say “Ironheart is my favorite superhero,” and that’s something that has to be earned.

BNP: I know that you’ve been a comic book fan (I’m sure your twitter followers remember your posting you and your now husband in storyboard adventures), but I’m curious what comics you read or were enthralled with? Stepping into this huge role, is there a specific quality of a comic book writer that you love and would love for people to take away from reading your Ironheart run?

When someone commissions a storyboard artist for a pretend movie starring the two of you, marrying them is a great idea. ? @nomadj1s pic.twitter.com/Ek571Bdy16

Ewing: I’ve always been in love with understanding the interior lives of heroes, so Watchmen made a big impression on me, for example, in lifting up questions about how superheroes fit into society in a way that was obviously iconic and ahead of its time. But also there’s a part of me that is still a kid that just wants to see my faves go on really cool adventures and escape perilous situations. When I was 14 or 15, this Harley Quinn solo title dropped and I snatched it up religiously starting with #1, and it was so fun to see a character I already liked who had sort of been on the margins step out into the spotlight and figure out how to fly solo rather than be defined by someone else. And there are so many amazing writers working right now! I’m so inspired by what G. Willow Wilson did with Ms. Marvel. Kamala is so fun and spirited and just so full. She makes mistakes, she deals with family stuff, and she is equally engaging whether she’s taking on a huge role with the Avengers or just handling business in Jersey City. And she’s had to reckon with developing her own sense of self that is distinct from her mentor’s identity. There’s a lot for me to learn from there. 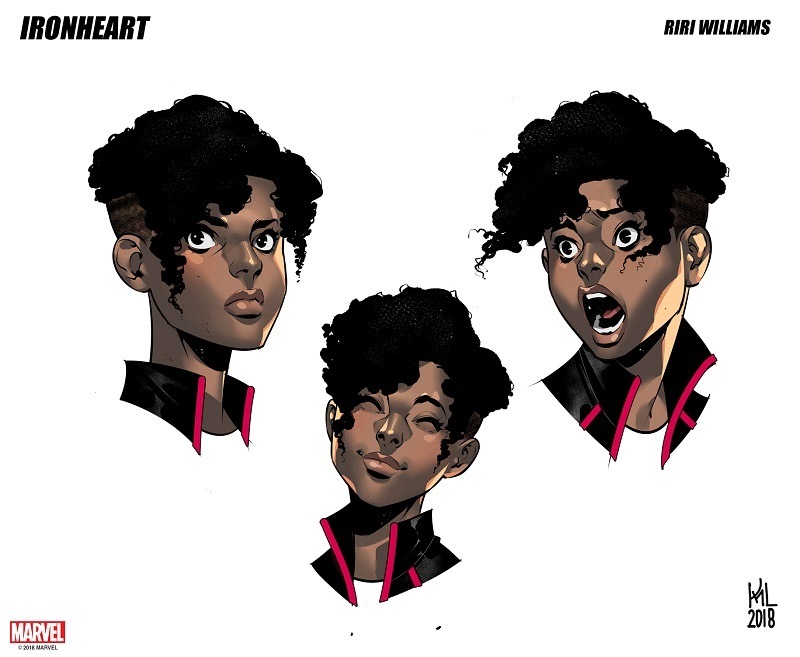 BNP: Marvel went from not having a Black woman writer on a series before hiring Roxane Gay on World of Wakanda in 2016 to making you the fourth Black woman writer for the colossal entertainment group. While this is obviously an awesome personal moment for you, how do you feel about the fact that it is still making history for Black women writers in the industry?

Ewing: Well, just for the record, Nilah Magruder was actually the first black woman to write for Marvel! So, I’m lucky number five. (E is the fifth letter of the alphabet. Think about it, Will.) I think that like most Black folks, I’m ambivalent about those kinds of milestones. It’s definitely jaw-dropping to feel like I’m taking a place in history in a small way. At the same time, in all of the work that I do, I’m always more interested in opening doors and building bridges than I am in being the one and only. I think the best thing I can do is keep my nose to the grindstone and create the best work that I possibly can, be as excellent as I can, and hope that some kid can see me doing what I do and think, “hey, that could be me” without a doubt or a second thought.

BNP: Nnedi Okorafor will be penning a new Shuri comic book that takes her depiction from the Black Panther movie as opposed to the slightly older and iron willed warrior queen that has existed in the comics to this point. With that addition, Lunella Lafayette and Riri all in the mix, it seems we went from little Black women representation to them almost becoming monolithic as teen or young adult, tech geniuses. Is there an aspect of Riri’s character you want to accentuate beyond her known genius IQ that separates her? Do you feel like that type of casting of these newer characters is even a reasonable concern given how positive the depictions are? 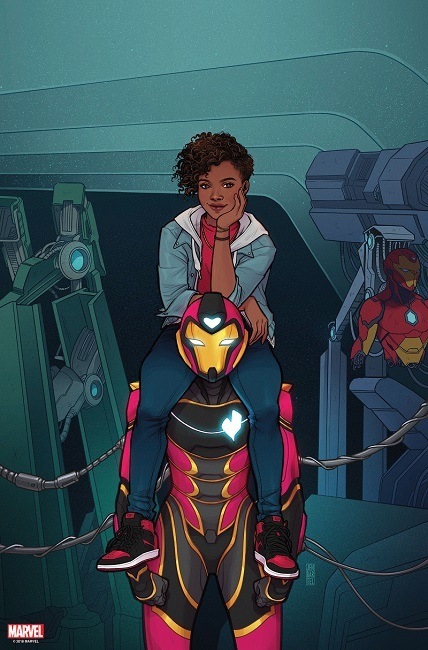 Ewing: Coming at it as someone who was a teacher and who studies education and sociology, I don’t even believe in the concept of IQ or the idea that you can objectively rank people’s intelligence, which is an idea that actually comes from eugenicist science. Also, as someone who has a doctorate from Harvard but gets called stupid on the internet a lot, I know that in the real world those kinds of labels don’t protect you from people’s perceptions and prejudices, so at the end of the day you have to do what you think matters because it matters and not because you’re trying to beat someone else in an imagined hierarchy. Look, Riri is absolutely brilliant. She’s motivated, curious, creative, driven, focused, and really good at solving problems. There are also a lot of things she’s not good at: reading social cues, forging deep and lasting relationships with her peers, facing the honest reality of some of the trauma she’s endured, keeping her desk clean. When we look at someone like Bruce Banner or Tony Stark, and we consider their strengths and weaknesses and personalities and distinctions, they go so far beyond any flat idea of intelligence. The same goes for Riri.

BNP: You’ve enjoyed a good run of publication recently, experiencing success across many different mediums with the release of Electric Arches last year, Ghosts in the Schoolyard: Racism and School Closings on Chicago’s South Side arriving later this year and numerous publications like your profile of Bomani Jones in GQ. You’ve proven that you can write in about any discipline, but did you always want to write a comic book, or was the opportunity to write a witty genius Black girl from Chicago just too unique an opportunity for you to not pursue?

Ewing: Thank you for saying that! I love writing, and I love the chance to stretch my brain in whatever way is best to tell the story I want to tell. I always thought I would write and draw an independent title. As a teenager when my friends daydreamed out loud about writing for DC or Marvel, I was intimidated by that. When I thought about writing superhero comics, I think I was daunted by the idea of entering into a story that has been essentially writing and rewriting itself, in some cases since before my parents were born. I also think there was a gendered aspect to it– all my nerd friends were boys, and they had kind of a swaggering assuredness that this was something they could do, and I was kinda like, “regular old me?” In Chicago we have two really great shops, Chicago Comics and Quimby’s, that both carry a ton of independent comics, on really small presses or just like things people stapled together. In addition to superhero stuff, I used to love reading and collecting those, and it was cool because I had a sense of the egalitarianism of comics on par with the egalitarianism of, say, zine making, or self-published chapbooks. I loved their irreverence, and I loved drawing and cartooning and so I figured that’s what I would do. I wanted to do an ongoing series kind of inspired by people like Lynda Barry and Ivan Brunetti. When Electric Arches came out, even aside from the whole petition thing, a couple of different folks in the industry who I really respect hit me up privately and said “you should be writing comics.” And it gave me a moment to reconsider the doubts I had as a kid and how much I’ve grown since then, my own sense of assuredness and confidence, and I felt ready. 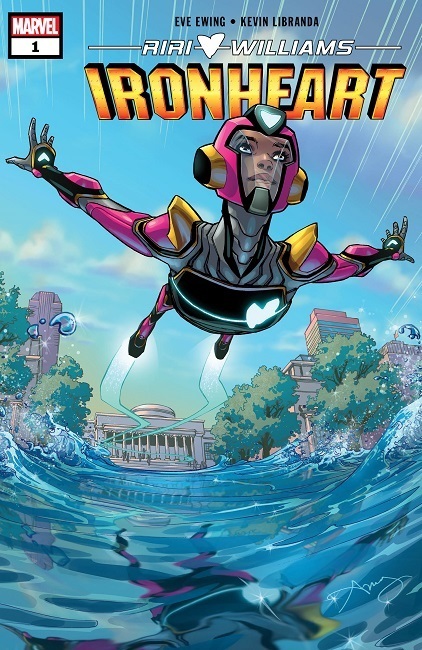 BNP: So, I know you’re really focused on making this a great comic book. And, I know you don’t want to get ahead of yourself. HOWEVER, I do want to state that because Riri is beloved, and because she still has a limited publication history to draw from, and everyone and their cousin is getting a comic book these days, and because they’ll be making comic book movies for at least another millenia…have you thought about how cool the possibility is that something you write, be it a storyline or a new character in Riri’s world, could end up on the big screen? And, if I can tempt fate some, can you think of an actress you would love to see voicing the Riri dialogue that you wrote?

Ewing: It’s such a blessing and a challenge to be able to write this story. I’m just gonna be grateful that I have a chance to do that, work as hard at it as I possibly can to bring folks the best book I possibly can, and anything else is gravy.

Fans are already clamoring for issue #1 of Ironheart, starting a tag on twitter to coordinate support for the book. If you can’t wait, like we can’t wait, share your story and hit your local comic book shop with #CopIronHeart