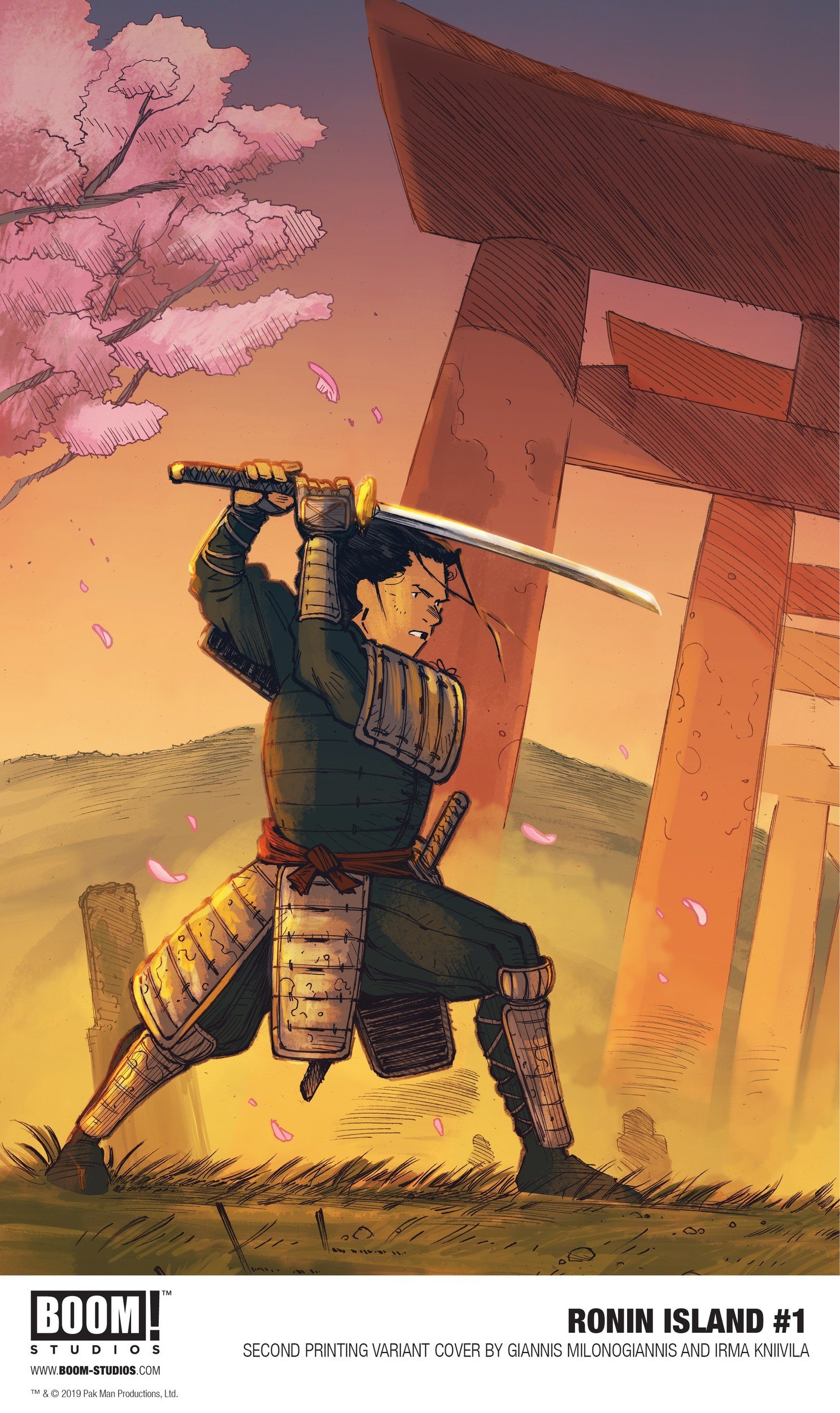 If you are at WonderCon this lovely Saturday, March 30, you may already be privy to the hype. For everyone else, the news: Greg Pak has blessed the audiences at BOOM! Studios‘s Discover Yours panel with the knowledge that RONIN ISLAND has earned a full series order of twelve issues! Citing overwhelming support from fans and retailers alike, BOOM! Studios has decided that a five-issue limited series is not enough. Nah, we’re going to be spending more time in this wonderful world that writer Greg Pak (Firefly, Star Wars) and artist Giannis Milonogiannis (Robotech, Old City Blules) have crafted.

For those of you who may need a refresher, RONIN ISLAND tells the tale of a secret island populated by refugees from Japan, Korea, and China who have secluded themselves from the larger world at war. Their tenuous peace is completely upset when General Sato brings soldiers from the mainland, and incidentally a horde of mutants. The current generation of ronin islanders, focusing on Hana and Kenichi, now have to learn to work together and fight a war on multiple fronts, figuring out what’s best for their home. We here at Black Nerd Problems loved the inaugural issue and hearing that we’re getting eleven more is certainly some great news to end March.

This doesn’t come as much of a surprise. Greg Pak’s last venture with BOOM! Studios was the much beloved Mech Cadet Yu which also garnered love from comic book readers. Mech Cadet Yu was upgraded from a limited series to a full run as well. This is the type of content and representation you got to love to see. 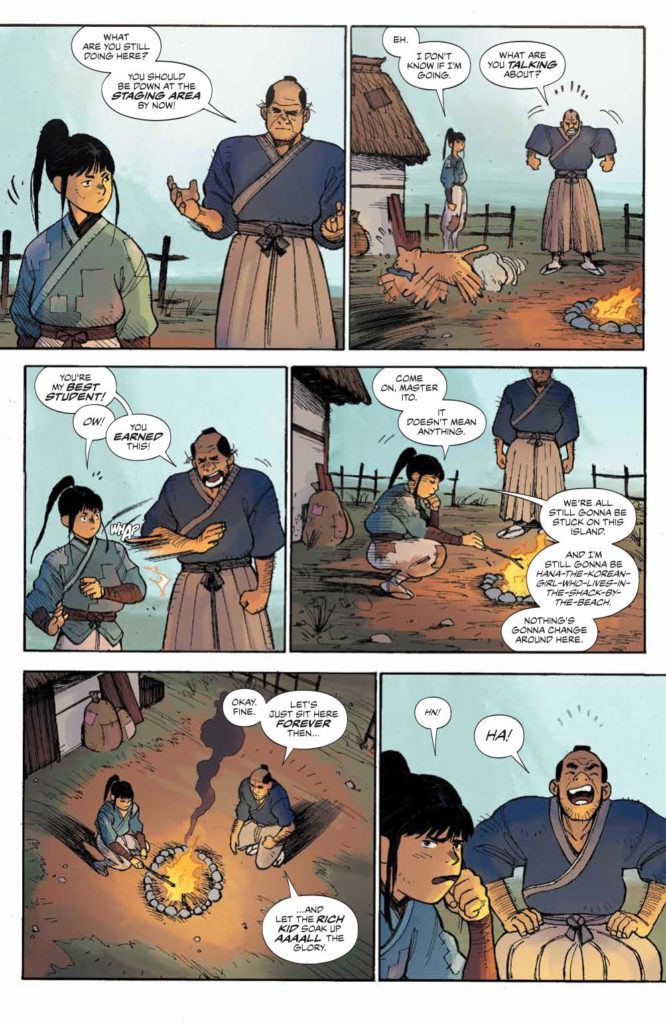 Greg Pak says the following: “I’m over the moon and so grateful to all the readers, retailers, and reviewers who have supported and spread the word about RONIN ISLAND. This kind of thing only happens because of you — you’re all our favorite! I’m particularly thrilled because as our brilliant art team started creating this world and making these characters come to life, I just didn’t want to leave. Now we’ve got the real estate to explore this weird world even more and dig even deeper into the hearts of our heroes. It’s a huge gift, and we’re doing our very best to make the absolute most of it. Thank you!”

Similarly Giannis Milonogiannis exclaims: “I’m beyond excited to have twelve issues to explore the world of RONIN ISLAND. I’ve always loved telling longer stories, and this news has me daydreaming about the adventures our heroes will go on and the threats they’ll face. Thanks to everyone who made this possible. I’m looking forward to all of us going on this journey together.”

And finally, I think Eric Harbun, Senior Editor at BOOM! Studios summarizes the hype the best: “The world Greg, Giannis, Irma, and Simon have built with RONIN ISLAND is lush, deep, and ripe for further exploration, and we’re all thrilled to be able to bring Hana & Kenichi’s expanded adventures to readers. As we move into the story’s second arc, expect more fantasy-tinged samurai drama, more mutant horde action, and more of the characters that have resonated so strongly with readers after just a single issue.” 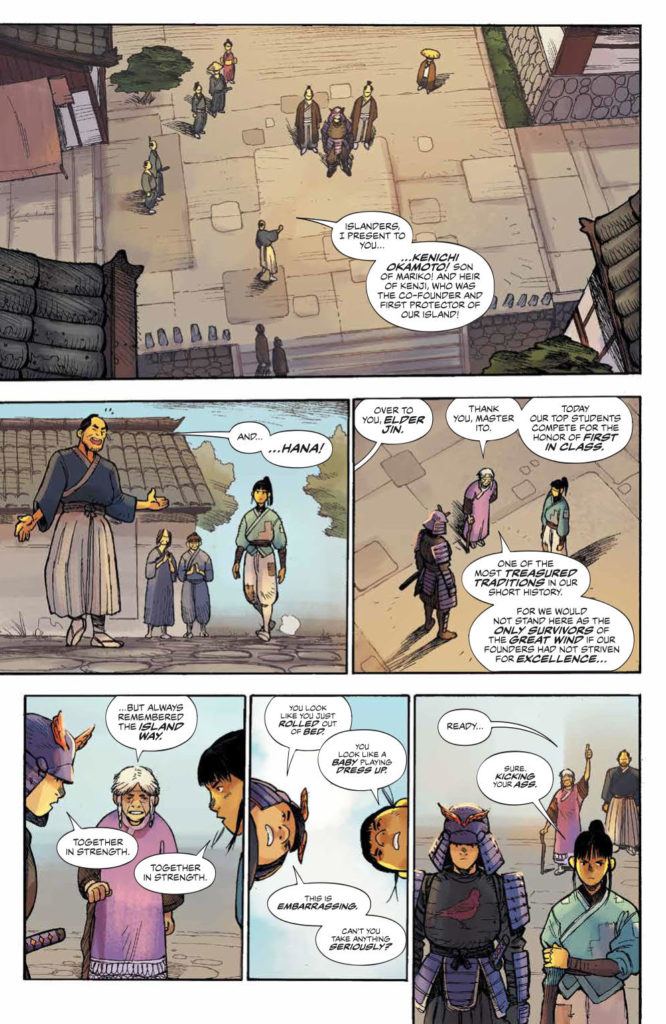 Print copies of RONIN ISLAND #1 may be still available at your local comic book shop, but if you can’t find don’t fret. On April 24th, RONIN ISLAND #1 with get a second printing with a new cover. In July, BOOM! Studios will release a comic shop exclusive RONIN ISLAND VOL.1 DISCOVER NOW EDITION, collecting the first four issues of the acclaimed all-new series with an exclusive cover. This edition will be available exclusively to comic shops for five months before any other edition is made available.

Furthermore, in December, a standard edition of RONIN ISLAND VOL.1, featuring a different cover and including additional behind-the-scenes material, will be released to comic shops and bookstores worldwide, with the same price of $14.99. While the standard edition will remain in print, RONIN ISLAND VOL.1 DISCOVER NOW EDITION will be strictly limited to its initial print run and never reprinted.

Greg Pak continues to be the champion of Asian American representation in comics and when diverse stories keep getting love and support we all win. I’m over the moon excited about this epic Pak and Milonogiannis have waiting for us and the hype is tangible and real. What a way to end March folks. What a way.

For continuing news on RONIN ISLAND and more from BOOM! Studios, stay tuned to www.boom-studios.com and follow @boomstudios on Twitter.