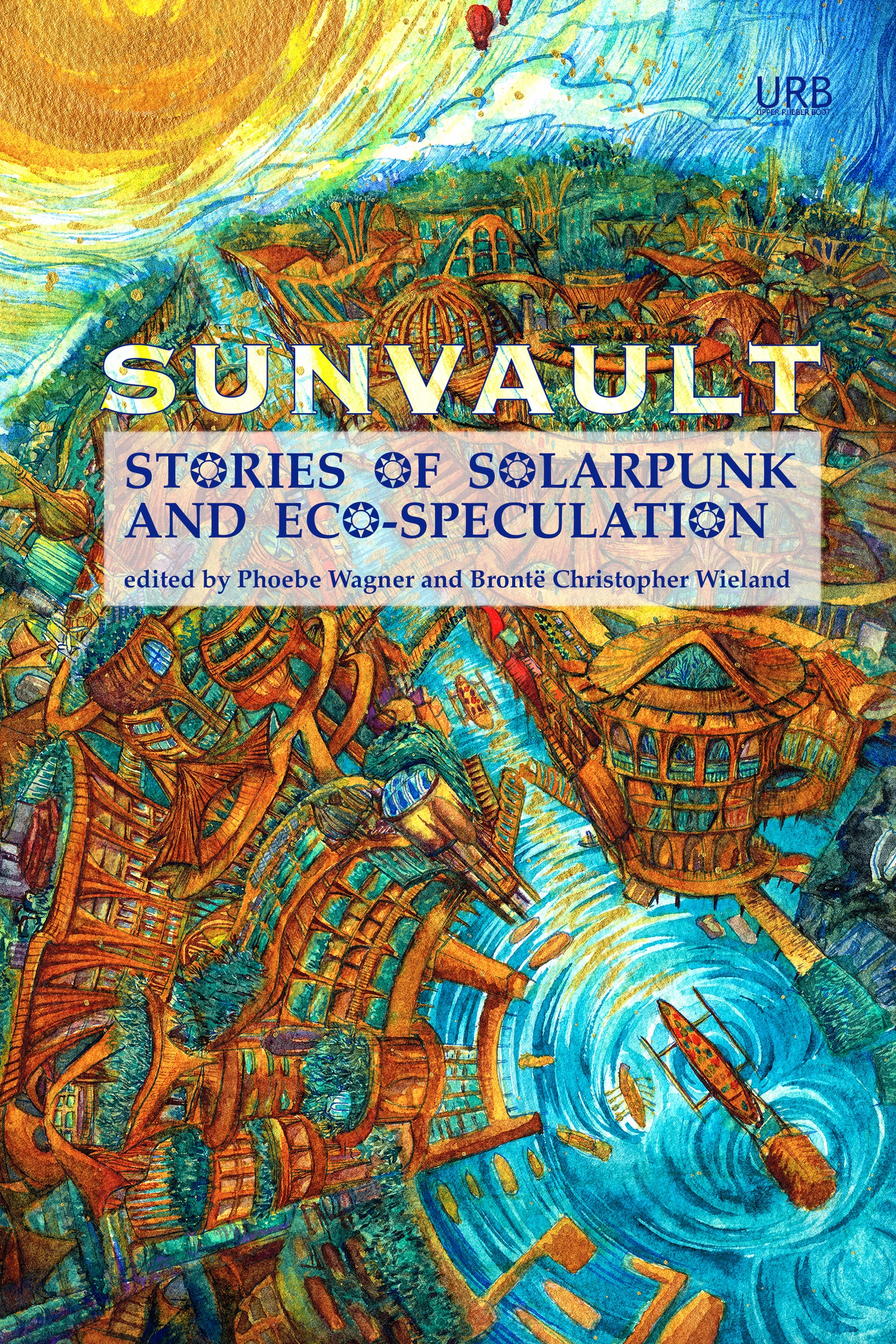 I first heard of Solarpunk when reviewing Fiyah Lit Mag #1 about a year ago. This melding of science fiction with eco-speculative fiction, mixed up with the Fight the Man sensibility of any -punk genre is 100% on time for our current political moment. The Sunvault anthology from small press Upper Rubber Boot Books in Nashville, TN covers a lot of ground — writers and styles, voices, main characters, settings — and each short story succeeds in its own way. There’s also a liberal sprinkling of poetry and original art throughout, to further vary the content. If you enjoy solid variety in your sci fi, and demand inclusion in writers and themes (as I do), then this is a good anthology to pick up. 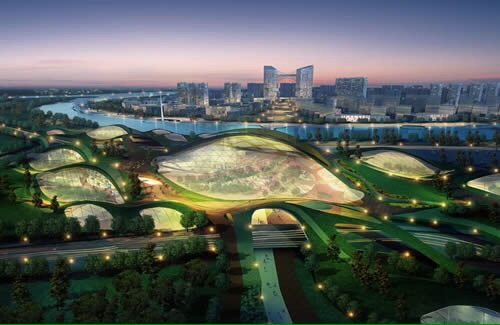 A few overall themes stand out. First, the future is international. Gone are the days when all the stories of the future are centered in North America and Europe. These stories take place across a variety of settings in Africa and Asia, as well as various levels of orbit over the Earth itself. This invites the curiosity of the reader, truly introducing new ideas and cultural norms, and defies any kind of nationalism. These stories are frequently so far into the post-apocalyptic future that some current boundaries of culture no longer relevant, but some still are. I’m thinking particularly of the story “Speechless Love” by Yilun Fan (translated by S. Qiouyi Lu). The twist of this tale of connection, romantic and philosophical, hinges on congee, a rice porridge eaten in many Asian countries. A shared love of congee allows two people, otherwise isolated on their own atmospheric ships, to meet. Fan’s tale is filled with lines of Chinese poetry that provide context and emotion.

My ancestors, longing for home, brought some soil aboard during the initial embarkation period. They brought tea leaves and rice seeds, too…I just harvested my modest rice crop this morning, their stalks plump and lustrous like expectant mothers. But because their output is limited, my harvest is only ever enough to make one bowl of plain congee a day. In this age, that’s a luxury. From “Speechless Love”

The post-apocalyptic positioning of these stories allows the writers to drive past dystopian and become something else — the suggested possibility of happy endings after the dust has settled. That’s the second theme: hope. -punk genres are essentially optimistic. They posit that a better future is possible, regular people just have to work and die to make it happen. One story is explicitly about this struggle for a future world, “The Boston Hearth Project.” Written by T.X. Watson, “The Boston Hearth Project” is a tale wrapped as an application for a future, revolutionary university. In the application letter, our hero the androgynous Andie, explains the time when they worked well as part of a team: taking over a maximum security hotel and turning it over to be used as housing for those in need. It is a great adventure, with a touch of romantic tension between Andie and their team-mate Juniper. As the story unfolds, we find out that Andie uses a wheelchair for mobility, leaving the parkour running to Juniper. The two make a great team. Here’s hoping the university says yes.

Third, in these imagined futures, family structures and genders are rearranged in any number of ways. From children being raised in collectives, to stories without gendered pronouns, to full on gender fluidity, after the end of the world we rely less and less on Christian/American definitions of our most basic relationships. It is key that in these frequently utopian stories, people set their own definitions based on what works for them and allows them to “get the job done.” The “job” is key to Daniel Jose Older’s story, “Dust”. I’ll be honest with you, this story is so good I had to put my e-reader down and walk away. I couldn’t read anything else the rest of the day, I just had to hold parts of the story in my mind. The main character, Jax, is the manager of a mining group on an asteroid — an asteroid that is hurling towards Earth. The job before Jax is how to embrace their own impending doom and that of everyone on Earth, or if not to embrace that death, to find a way to survive.

Complicating that survival are current lovers, former lovers, and of course evil corporations. Did I mention that Jax is both male and female, depending? It is a wonderful world that Older drops us into, described bluntly and beautifully at the same time. Jax’s gender is both important and almost an afterthought to the story. The set up challenges what we assume is important, and how a future may alter our bodies and perceptions in any number of ways.

The Rustvine has settled back into its regular banter: filthy, dust-covered men mutter their dust-covered prayers to each other, sip Vanguard till everything tastes like oblivion, which is slightly less bitter than disaster. From “Dust”

I fully enjoyed my time with Sunvault. The editors of the anthology did a great job of developing an inclusive collection that illustrates the possibilities of a future after the Earth has changed. As the sub-subgenre of Solarpunk continues to develop and find its edges Sunvault could definitely stand as a central statement of what Solarpunk is, what it strives for, and how it differs from other subgenres under the -punk umbrella.

You can download Sunvault: Stories of Solarpunk and Eco-Speculation from the publisher, Amazon, and anywhere else you get your digital reading materials. 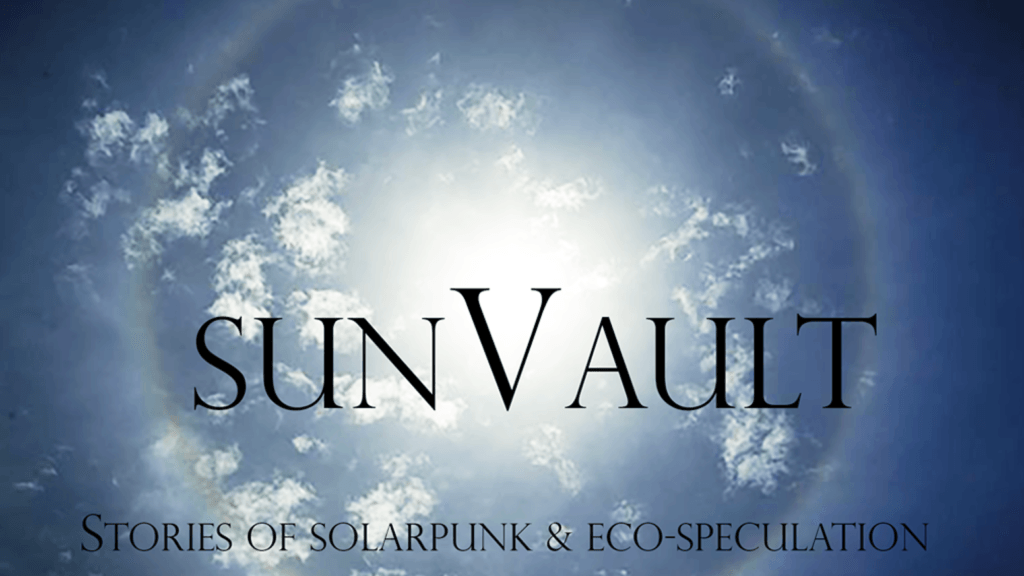