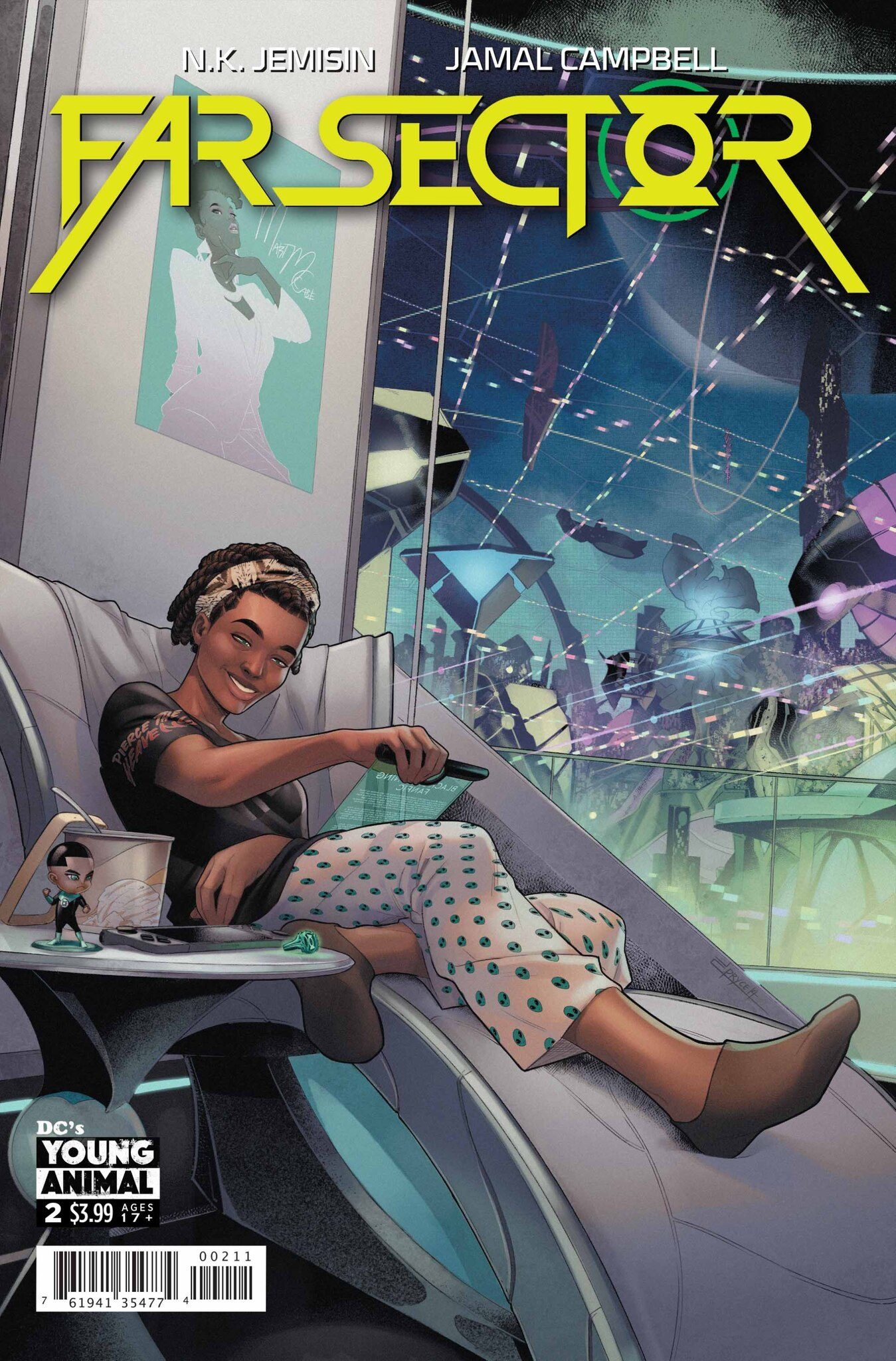 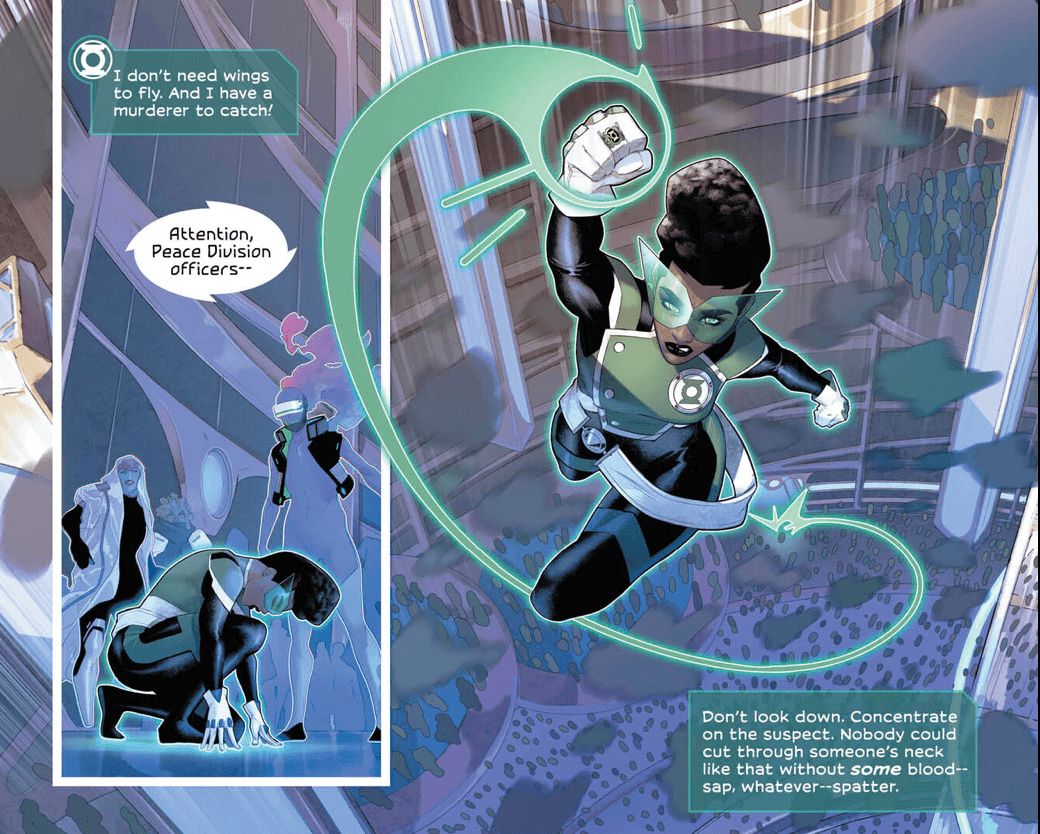 Lupe Fiasco has a line on his S.L.R. (Super Lupe Rap) track where he says, “Top 5 Alive and I only got two out,” referring to only having two albums out yet, still, clearly one of the Top 5 rappers alive. I say that to say this. Far Sector in only its second issue is legit coming for Top 5 Green Lantern stories contendor status. N.K. Jemisin and Jamal Campbell let the beat build with Far Sector #1. In Far Sector #2 it’s nothing but Phil Collins In The Air Tonight drums. Korra Book 3 trailer drums. Clipse’s Grinding drums. The Morpheus/ Matrix homage in the opening recap already enough to make me fan out, so if this is the type of Sci-Fi Afrofuturism adventure shit we’re in with just issue #2 and we still 8 issues more to go, then shut up and take my money.

We start the issue of with Green Lantern Sojourner “Jo” Mullein in pursuit of the murderer that just murdered the first murderer from the last issue. Remember, the first person to commit a murder in City Enduring in over 500 years? Yeah, well they just got murdered, and Sojourner is after the perp. Now, this is the shit we’ve been waiting for. We finally get to see Jo using her Green Lantern ring. She creates construct arms and hands (with some super well-done nails) but the perp too fast. When Jo sees that they escaped into the traffic of a sky atrium, we see her take flight hoping to pick our perp from the crowd out with “Blood” spatter on them. What Jo gets is the wrong person that happens to be a sweet, Nah, grandma. 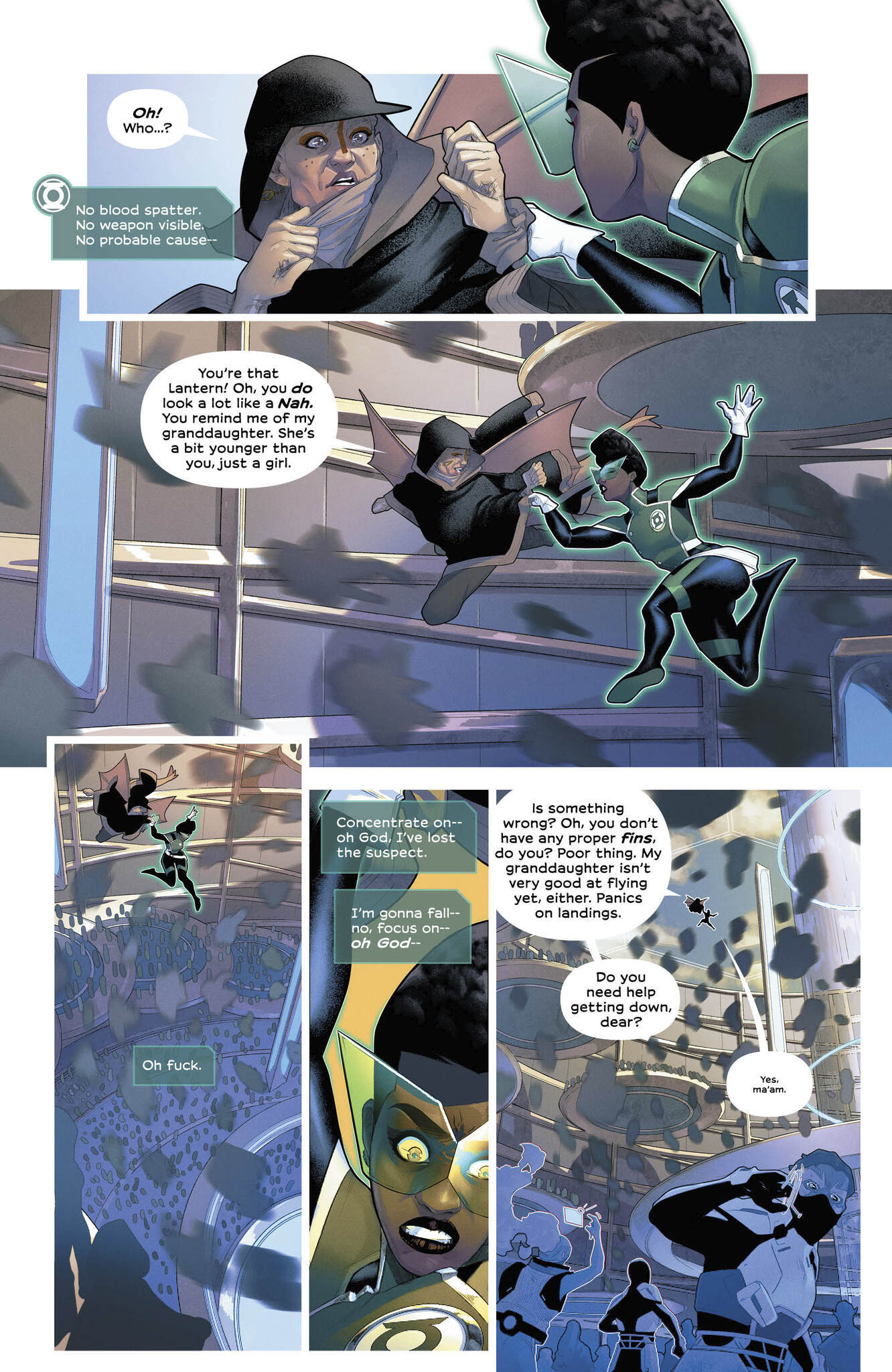 What really stands out with this scene is how we see Jo use her lantern ring. The way she takes flight isn’t with a leap in the air but a quick gathering of herself on the ground, crouched down, eyes closed before jumping into flight. All the while trying to apprehend her perp while concentrating on keeping flight. Through the years, we’ve seen new Green Lanterns and flashbacks of the vet Green Lanterns being naturals at flight or having fun with their first time flying. We’ve never seen the concentration that goes into it, and what happens when it breaks. N.K. Jemisin has Jo say a simple, “Oh fuck” that humanizes her so fucking much in a way we haven’t seen in Green Lantern lore with art imitating a legit life reaction. Jo needing to be guided down by the grandma is the cutest shit I don’t ever seen. Which was then trumped by even cuter shit later!

This series way too boss, I need a moment

After Jo’s flight gate, she runs into Counselor Thorn back at the precinct (which is now a new crime scene). Here Counselor Thorn gives insight into what may have led the first murderer, a keh-Topli, to kill. We then learn how the keh-Topli “feed” on thinking beings and how the Emotion Exploit effects their “feeding” ways. We then meet Jo’s friend Syzn who explains more of this aspect of the keh-Topli and their “feeding” being, in a way, spiritual. Jemisin shows a lot of character for Jo with how she and Syzn came to be know each other and become friends. Jo’s outer and inner dialogue as she talks with Syzn provides us with subtle tidbits about her personal life.

There’s a great moment between Syzn and Jo in regards to how their species handles emotions differently, and their first impressions of each other. What Syzn says to Jo in regards to how she is able to trust herself with her emotions (both impulsive when need be and critical when need be) being astounding to her. It’s so hard not to see that a statement as a positive affirmation against the “angry Black woman” stigma that Black women have to deal with as well as the “women are too emotional” trope. Jemisin’s writing weaves these social commentaries so beautifully for the reader to arrive at. I love it. There’s also another reference to the drug Switch Off that some people take to circumvent the Emotion Exploit’s effect.

The latter portion of the book may have my favorite scene from this issue. I won’t say what happens but, it’s fucking cute as fuck and the closing shot goes on to prove that Jamal Campbell is the best at what he does, and what he does is art his ass off. Just looking at the different backgrounds and portions of the city enduring is one thing. Yet again, these aliens of color get me every time. I love how they have humanoid features but look and feel alien. Listen, Kryptonian, Thanagarian, and Rann are aliens we’ve seen through DC Comics’ history that have been predominately white. They’re legit just white folks from space. Campbell’s distinctions between the three species, and Jo as a human, feels so different and legit. 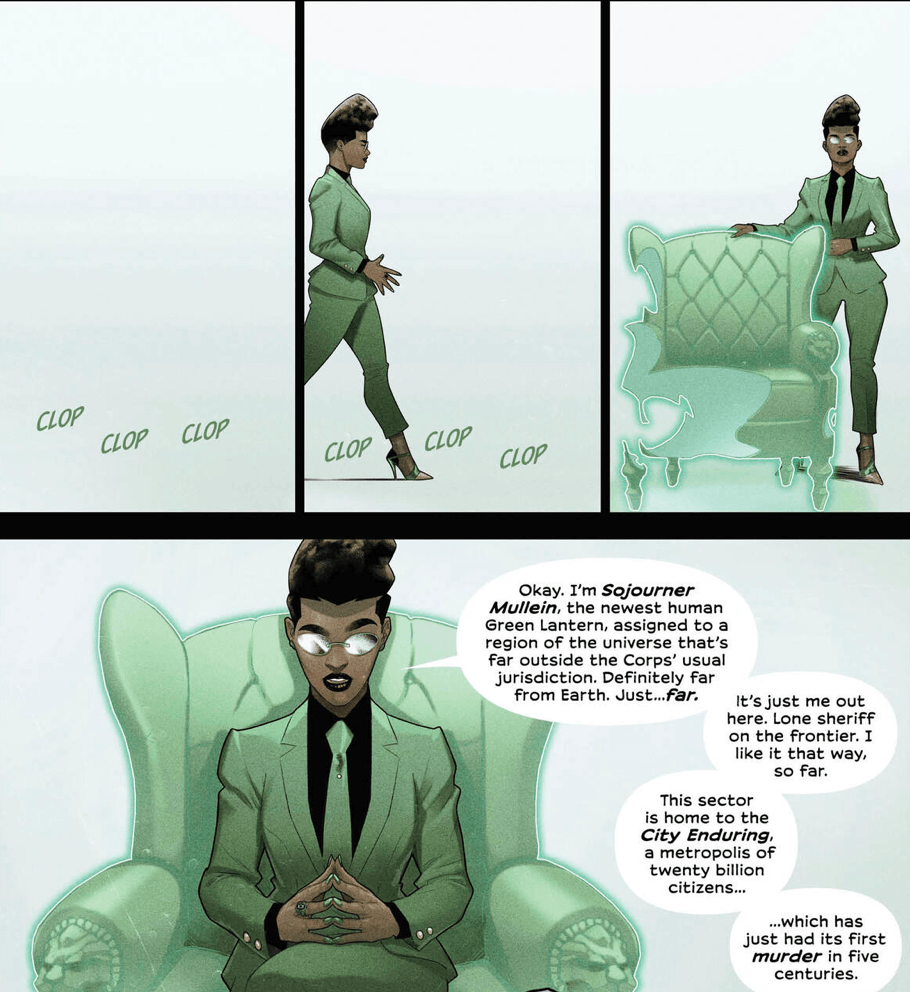 Both the opening and closing scenes of Far Sector #2 let’s you know Campbell is here to flex on the sci-fi game with all the Afrofuturism the ink he can muster. I feel like I’m seeing legit aliens as I read Far Sector. Don’t even get me started on Campbell’s hair stylings for Jo, or how he depicts her hair wrapped, or Syzns hair, or the locks on Counselor Marth? The humans and aliens out here glowed all the way up with Campbell on the sketch board man.

I can’t say enough good things about this issue. I really enjoyed it. Jemisin choice in having Jo not using her lantern all the time or at every instance like most Green Lanterns makes her such a different power ring wielder. It’s almost reminiscent of Green Lantern Hannu’s use of his ring in that when we see Jo go all out, it’s going to be a big thing. Jo’s minimal use of her ring has made her even more interesting which isn’t easy to do with a Green Lantern. N.K. Jemisin and Jamal Campbell are creating a new, interesting approach and chapter in Green Lantern lore with Far Sector with no signs of letting up.

10 Step Up Choreographed Dance Routines out of 10