Have you ever gone into something blind, and by its end you were pleasantly, genuinely surprised by it? That’s what happened to me with Fearscape. I keep an ear to the ground on anything Vault Comics related, but I hadn’t done too much creeping on this new title. When I got the chance to do this review, I knew nothing about it. I think that’s why I enjoyed it so much. The one regret I have is that if you’re reading this, you won’t have the chance to have the same reaction I did.

In short, Fearscape is a blend of Sandman, highbrow literary satire, and an unreliable narrator.

But it’s so much more than that. Let’s unpack the goodies. 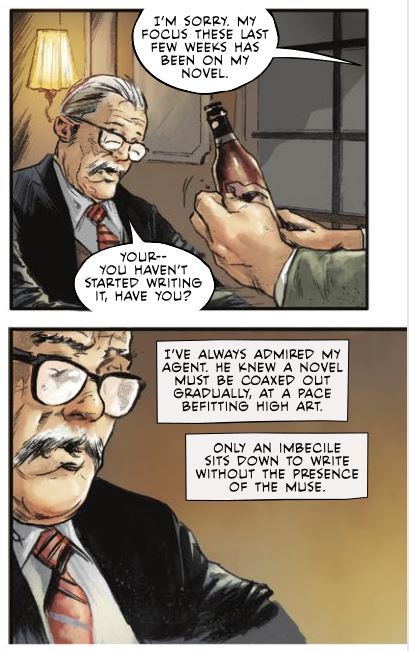 The protagonist—if you can call him that—is named Henry Henry. Dude not only has two first names, he has the same two first names. Henryx2 claims he’s a writer, but he’s actually an unapologetic plagiarist. When a mystical being dubbed The Muse appears and mistakes Henry for the greatest storyteller on Earth, he doesn’t bat an eyelash and accepts the role. The two enter the Fearscape, a realm where humanity’s worst fears are manifested.

What makes this first issue so strong are the rules that it sets up. O’Sullivan lets us know from the very first page that this story reads differently than most. The narrator acknowledges us, and gives us a role in the story. This is a hook to end all hooks. 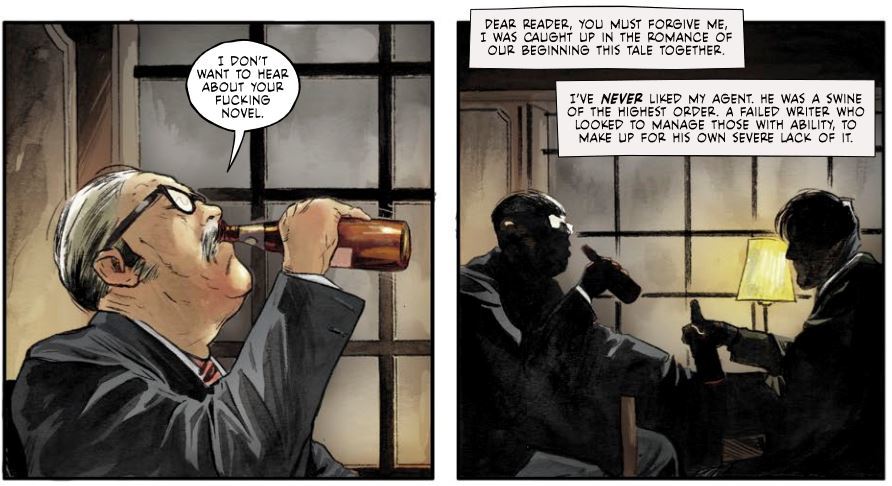 On top of the narrator talking to us directly, we quickly learn that he’s a bit of a dick. And shortly after that, we realize he can’t be trusted. Time and time again he tells us one thing, but something else unfolds on the page. It’s a level of the unreliable narrator that I don’t think I’ve seen before. In prose, it’s a bit harder to tell if a narrator is unreliable because everything, down to the descriptions of the scenery, is from their point of view. You’ve got to be more of a sleuth who strings together inconsistencies that don’t add up. But with Fearscape, Henry will lie to your face while a seemingly objective view of the scene is displayed for us that goes against his narration. I say ‘seemingly’ because at times Henry also blocks things from our view, which begs the question, if he has the power to hide things from us, is anything that we’re seeing truly real? This stuff gets deep, and it’s right in my wheelhouse. As someone who got their degree in Creative Writing, along with being broke, I’m happy to see tools of literary craft used so strongly in this medium.

I really like how the art shifts as well. Andrea Mutti does a good job of giving us the contrast of two worlds. At the beginning of the story, things are straightforward and shrouded in shadows, which conveys some of the uncertainty of Henry’s life. But when we reach the Fearscape, everything changes. Everything’s abstracted. This is all highlighted by Popov’s coloring. The browns and greens of the real world are replaced by saturated purple and yellow.

Fearscape manages to blend a lot of familiar elements into a story that feels wholly original. It’s hilarious, clever, and intriguing. If you’re a fan of reading, no matter the genre, or the medium, this is a story you can appreciate.

10 Flawed Characters Out of 10