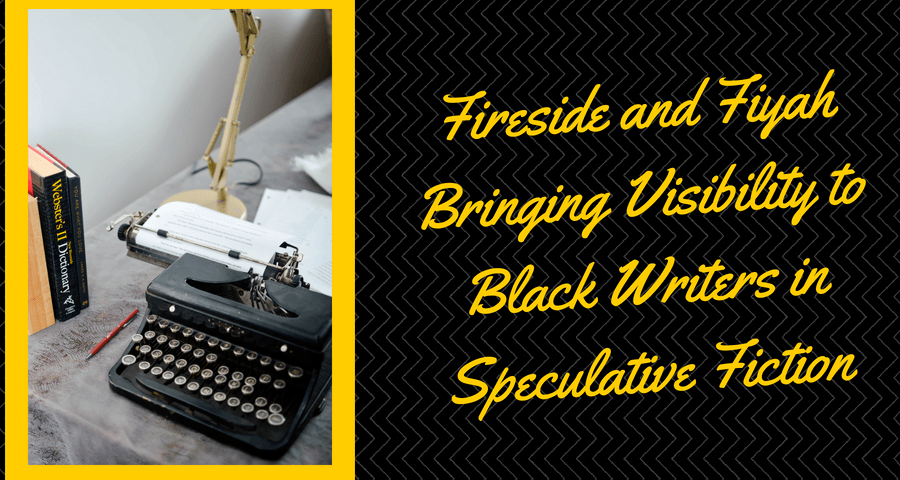 We know how this goes: whenever we as Black people talk about exclusion, the choir of “Prove It” turns up, demanding stats and figures and research. Our experience is not enough. Well, two of the strongest short story publishers in Speculative Fiction, Fireside Magazine and Fiyah Literary Magazine, have independently produced the facts and figures to prove what we already know: that Black people are disproportionately rejected from the major publishing markets. With three years of data, we can see improvements in some magazines, maintenance in others, and that some magazines, in L.D. Lewis’s words, should:

“Just admit your market’s discerning tastes skew colonial and that you’re fine with it, but stop insisting that apparently 100% of the stories you receive from Black writers just aren’t good enough.”

And if you’re going to admit that, readers and writers should know, so we can vote with our dollars and submissions.

For the third year running, Fireside Magazine — while publishing some of the best spec fic in short form — has also produced the 2017 #BlackSpecFic report. The #BlackSpecFic report, under the lead of Cecily Kane, chronicles in hard numbers the facts so many Black writers can testify to: regardless of “diversity” statements, some publications actively under publish Black writers, and probably all writers of color.

In the years since Fireside started doing the report, Black representation has doubled in the pro-rate magazines surveyed. 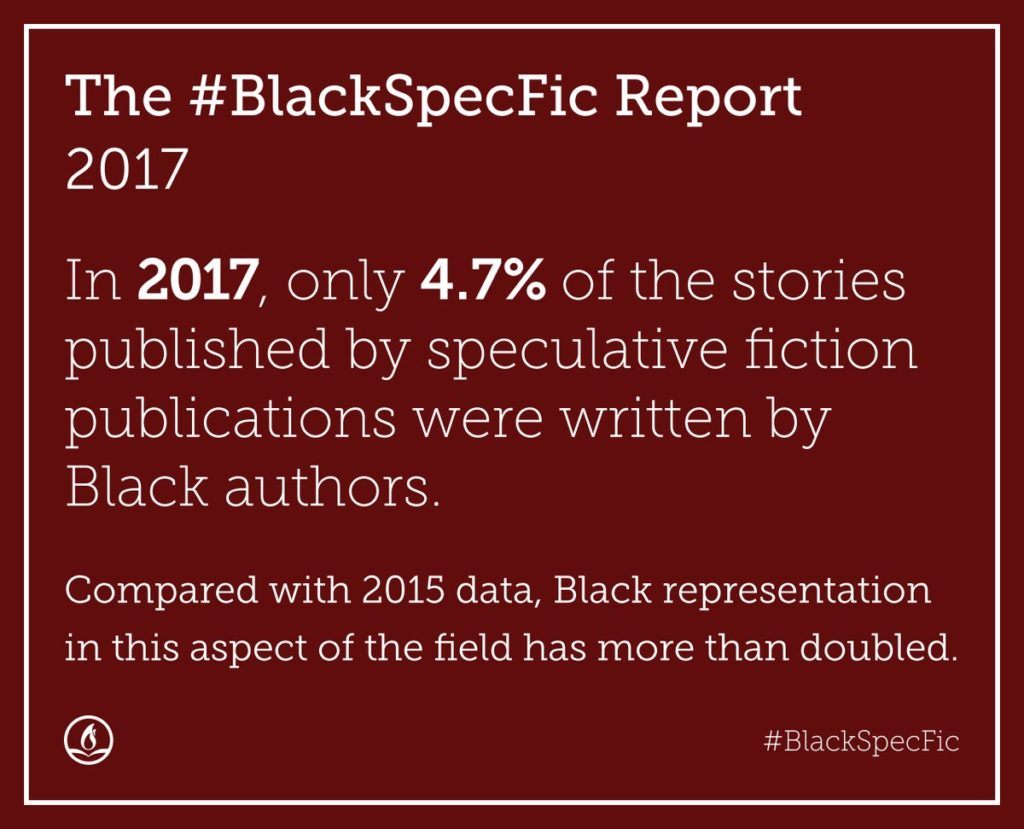 In addition, more Black first time authors were published in 2017 than in the previous two years combined. That’s also pretty amazing news for an industry that is conservative in its tendency to republish the same favorites over and over. That’s the good news.

At the same time, that new rate of 4.3%, is nowhere near the rate of Black people in the population. And that percentage is carried almost exclusively by 9 out of the 23 markets reviewed. The field, as Phenderson Clark’s 2016 essay “Submitting (SFF) While Black” states is “…Like church on a Sunday segregated.”

You can read the full overview at “The 2017 #BlackSpecFic Report“. Kane and team provide all the details to make your Statistics professor happy. It is definitely clear that by tracking these numbers, The Report makes magazine leaders undeniably aware of the state of Black authors in their publications. And Black authors know who is doing something about these numbers, and who isn’t.

The Presence of Blackness Score

For the first time, Fiyah Literary Magazine, with data compiled by L. D. Lewis and team, is handing out the Presence of Blackness score to other short story magazine publishers. This score is a single composite number that allows readers, writers, and the publications themselves to evaluate how many Black writers they published, how many Black slush readers and editors they employ, and other important metrics. As shown in these graphics, Strange Horizons, Apex, and Fireside are doing the best of the field at acting on goals of including Black people at every level in their process.

(This, of course, doesn’t include Fiyah itself, which publishes only Black people and has a Black staff.)

While the POB doesn’t directly record the responses to the Black SFF Writer Survey Report, it does dovetail with that information nicely. Fiyah makes no bones about their mission, and they’ve done a fantastic job of not only publishing new talent but providing more information to writers on getting published.

To be clear: readers and writers of #BlackSpecFic are @fiyahlitmag's priority. Our mission. Our agenda. But we shouldn't be the only ones publishing black writers.

We’ve talked in the past of self-rejection — where Black writers don’t submit to publications out of fear of rejection. What had been a word-of-mouth whisper network, Fiyah is here to make loud and clear. Submit where you’re wanted to get published. Leave those other publications in the dust. Considering that the three most highly rated publications in the POB are also all nominated for Hugo awards this year, one would be hard pressed to argue that inclusion harms quality. In fact, the argument could be made for the opposite. A true commitment to Black SFF indicates a commitment to inclusion for all marginalized writers and with it, a real dedication to publishing the best short stories being sold today.

Review the entire Presence of Blackness score and methodology on the Fiyah Literary Magazine website: “The POB Score Project”. Read Lewis’ insights on the project and the results in her essay at Fireside: “POB Scoring: Growth and Accountability”. The POB is a great, easy way to decide who’s going to approach your short story with an open hand and how may have unexplored biases. It is also a great way for readers, who may only by one subscription, to decide who gets that cash.

For Writers and Readers Alike

Both of these reports, the #BlackSpecFic report and the POB Score, are tools. Surely they advocate for a certain approach to attracting and publishing Black writers (and by extension other marginalized writers). They provide targets, tracking, and data, all the data one could want to make informed decisions. They seem to be targeted to writers and publications, but they are also tools for readers as well.

For writers, trying to produce and sell their work in competitive markets, they now have the signposts to decide where to submit first, where to query, and where their works can get the most unbiased reading. This provides confidence that any rejections are really based on a need to improve, and that any acceptances are true reflections of quality. This also applies to white writers, who must decide if they want their work to be published by magazines that, through their actions against Black writers, indicate a lack of concern for righting the historical wrongs of the medium.

For readers, the folks spending the money, these reports tell you who gives a damn about you. About representing your experience in their publication and sharing the multifaceted magic of Black Speculative Fiction with audiences. We have a lot of power to spend our money on publications that actively support us. I’m not telling you what to read or buy (we do that in our book reviews all the time). I am saying that if supporting inclusion in fiction is something you talk about, then buying magazines and journals that actively walk that road is a great way to put your money where your mouth is.

Lastly, I have to echo both reports in saying that while these projects focus on Black SFF, the pattern can and should be repeated for other marginalized writers, Latinx, Disabled, and so forth. While we may be at the front of this effort, we want all of y’all to get in with us.

Thank you to Cecily Kane and Fireside Magazine, and L.D. Lewis and Fiyah Literary Magazine for these efforts to inform and support the Black SFF community at large. This labor, large and unpaid, pays off for all of our benefits.