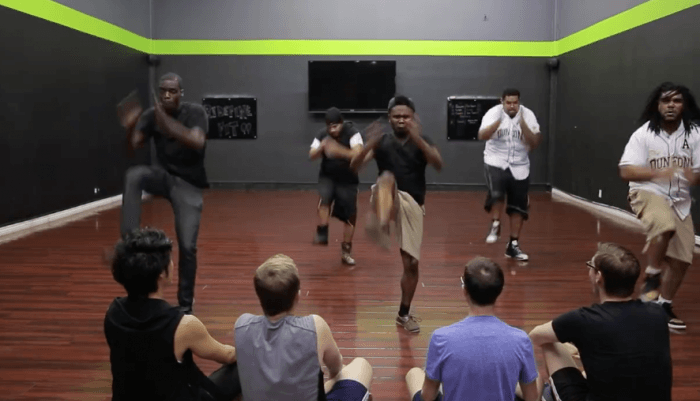 There are many people confused about cultural appropriation and the difference between appreciation and appropriation. They are also baffled by the idea that a dance, music style, fashion or hairstyle can be specific to a certain group and therefore one should look into embracing that activity with care. On April 10, 2016, The Try Guys released a video where they tried stepping, a style of dance that is very specific to Black fraternities and sororities in America. Had this experiment gone wrong, Black Twitter would have exploded, but instead, it passed with a chuckle, wink, and a hand clap.

So the question is: what did they do right or how does someone appreciate and embrace a culture that’s not your own and not get accused of racism, ignorance, or cultural appropriation? To answer that question (because I’m sure inquiring minds what to know) here’s is a list of 15 things they do right; so strap in ’cause this going to be a trip.

One
The first image in this video is of Black men. This visually sends the message that whatever we are about to see is something that they, as black men, have mastered. This is our first image.

Two
The second image that we see is the Try Guys sitting down… Learning. Coming into the space with humbleness.

How this could have gone wrong: They could have interrupted a step routine and then ask to be taught. This would have sent the message that what someone was doing before what not important until the Try Guys arrived. But no, they entered the space with respect and they were also clearly invited into the space. Which brings me to…

Three
When participating in something that is not your culture… get invited. Do not just take because it’s cute, fun, interesting…. whatever. Get invited. By all means, read and learn, but if you want to participate, to make your knowledge active. Wait to be invited to do so.

Four
“Step. Stepping. Step Dance.” Learn the proper name of what you are participating in. This critical step is what so many people avoid because they can’t be bothered to learn. This is also another example of humbleness and respectfully engaging in a new culture.

Five
“Doesn’t look like something I’d be very good at.”

He didn’t say, “I’m a White guy so of course, I’d be bad at this.” Why is this important? Because that statement would imply that the Black people present are there for his entertainment. Self-depreciation doesn’t sound the same when interacting with the new culture while being White. When you are a white face in the POC space or a straight person in a gay space or man in a woman’s space, or a rich person in a working-class space, jokes about your status will carry a weight of insult, injury, and reminded pain because you have been invited into special space and mocking your own privilege implicitly makes the people that you are with the ‘other’.

Six
The Try Guys don’t just learn a dance. They learn the history of the dance and why it is important to the fraternity, to the Black colleges, to Black people. When people appropriate a culture, they will use an element of the culture without even trying to understand its meaning and legacy. The Try Guys learn meaning while exploring… and that brings us to…

Seven
The Try Guys learn from Alpha Phi Alpha Fraternity Inc. The oldest Black fraternity in the nation. A Black person familiar with stepping in America would recognize this reaching out to Alpha Phi Alpha as a legitimate way to learning about stepping without trying to mock it. It’s going to the ‘masters’ if you will, again in a state of humbleness. They didn’t go to step dance cardio class. They went to the source. Another sign of respect and research on their part.

Eight
“Seeing 3 White dudes and an Asian guy stepping with you guys in unison…” Own who you are in the space. Vitally important. This may seem contradictory to what a wrote before but listen. All privilege is a responsibility, but most people don’t feel that responsibility until there are in a space where that privilege becomes apparent. When you have privilege, but come in a spirit of humbleness, you are saying, “I know I am (White, a man, straight) and I know that just by my presence, I may represent people and events that have hurt you in the past, but I am here in the spirit of love and to fully respect who you are as an individual human being.”

Nine
The Try Guys work hard to get it right and understand that by participating in the art form they are now representing the Alpha Phi Alpha and that is a big deal. They take on the responsibility of representing this culture, representing it well and not mocking/changing or remixing it for their own ends (and then renaming Body Beats to teach it as a class at LA Fitness). There are 3 white guys and one Asian guy performing an African American art form with understanding and respect while not claiming to do it better or make more palpable to a White audience nor do they claim to suddenly being “Black” themselves.

Fourteen
When doing the performance that are not wearing any Alpha Phi Alpha logos. Which again, shows respect to their teachers, the organization and those would made it possible for them to be apart of this event. There are people would say without any gall, “I worked really hard on this for a week, my hands are red and my thighs hurt from hitting them so much, I deserve to wear what everyone else is wearing.” No. What the Try Guys did is wear similar outfits to ALLY themselves with the Alpha Phi Alpha, but they are not Alpha Phi Alpha. See how that works?

Fifteen
And with all the respect and love given, that respect and love was given back with the members of the Alpha Phi Alpha being impressed with the Try Guys and feeling that love. And respect, love, and admiration for all.

And that ladies and gentlemen, is how you engage in a culture different from your own without being accused of racism, disrespecting, othering or cultural appropriation. I hope you’ve appreciated this tutorial.