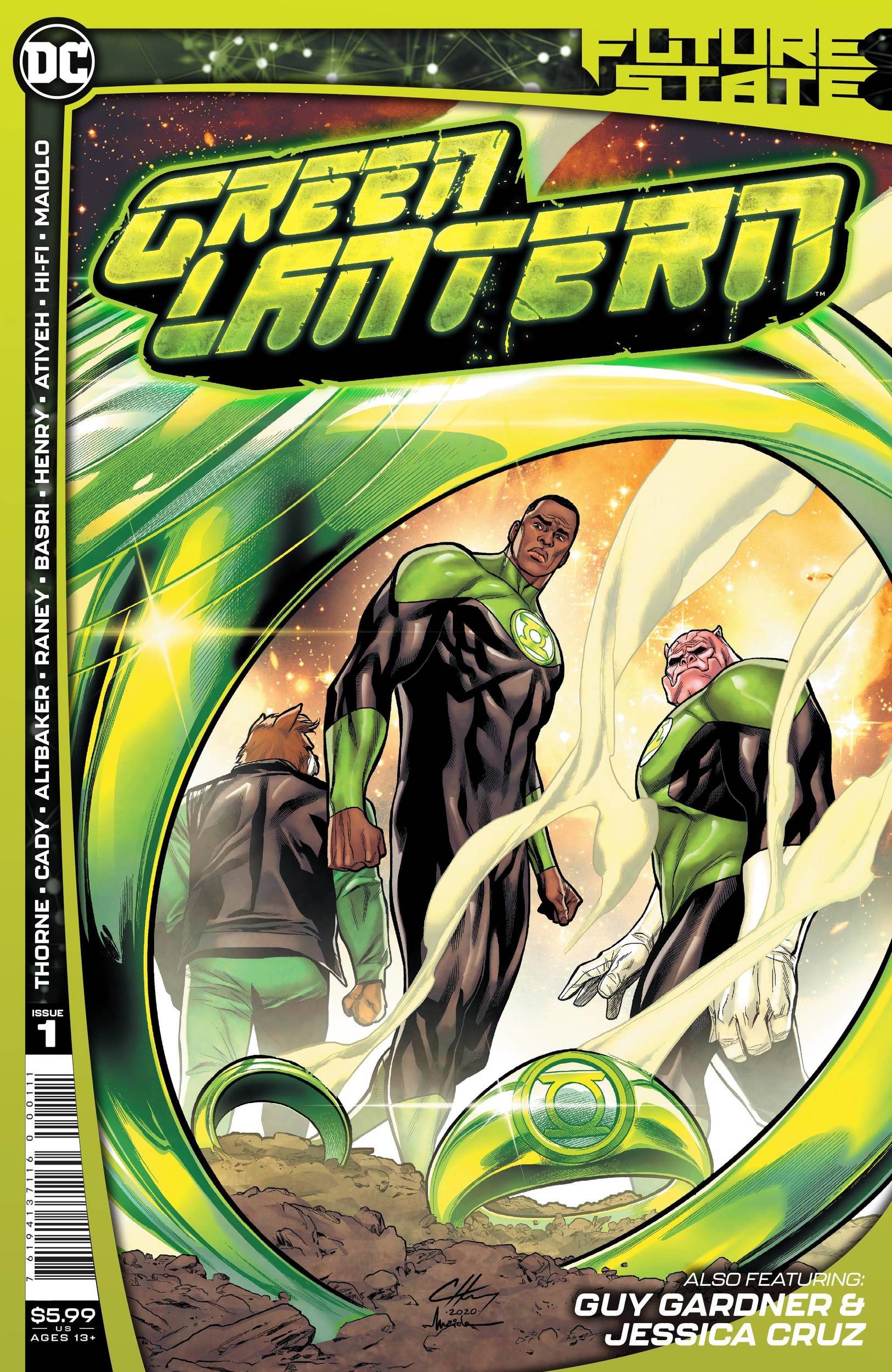 In the first of two issues exploring the possible futures of some notable Green Lanterns, we get a small anthology with three stories led by John Stewart, Jessica Cruz, and Guy Gardner. But these aren’t the Green Lanterns we’ve come to know and love. After the Central Power Battery goes off, the Lanterns have no juice in their rings, and they’re stuck in the far reaches of space.

The first story is “Last Lanterns” featuring John Stewart and an elite squad who were in the middle of mapping new sectors of space when the power battery went offline. They’re now stuck in the middle of a foreign planet’s war.

This is a really dope setup, and it features a grizzled, take-no-shit John Stewart. My mans has got a full zaddy beard and he’s dreaded up. And his weapon of choice in this post ring life? A literal laser sword. Dude has all the steez.

On top of the cool premise, what I really liked about this story is that it centered John as a leader, something we don’t see very much for a character who has a background as a Marine. He led his elite squad of former Lanterns valiantly, and I can’t wait to read more in the next issue. This just unlocked my dormant need to have John Stewart not just featured in more books, but with agency as well.

The second story in the book is called “The Taking of Sector 0123” and it follows Jessica Cruz, as she goes up against a couple of Sinestro Corps goons in the process of taking over a station once manned by the Green Lanterns. See, not every color on the emotional spectrum lost their powers. Just the Green Lanterns. Jessica Cruz has to take down these intruders off of sheer ingenuity and will. Essentially, she has to prove why she got a Green Lantern ring in the first place.

This story reminded me a lot of Die Hard, with Jessica crawling through a lot of small crevices and using her wits to take out some intruding forces. It was done really well too. It ends at a point that makes me believe there are some pretty cool and exciting changes for her character in the future.

The third and final story is titled “The Book of Guy” and it features, you guessed it… Guy Gardner.

This one was a little more lighthearted than the first two, which is what you do when you’ve got Guy Gardner at your disposal. The story follows Guy as he’s answering a distress call on planet Rerlin, where he tries to stop two pre-space warring factions from destroying each other. But in the middle of the battle, his ring dies, stranding him there for good.

He’s eventually able to stop the fighting, and he becomes a messiah figure of sorts for the Rerlins. He has the word of God, or the word of Guy, and his rules govern the land. He mostly makes some pretty good changes to the world, adding indoor toilets and foosball tables, and in some short time, his presence causes an eradication of all unnecessary death on Rerlin. This all hinges on the Rerlins believing Guy to be a prophet. Because if it was revealed that he wasn’t, this whole thing would come tumbling down like a house of cards…

Green Lantern: Future State #1 gives us a glimpse into the lives of some of our favorite Green Lanterns as they navigate their place in the galaxy without the power of their rings.