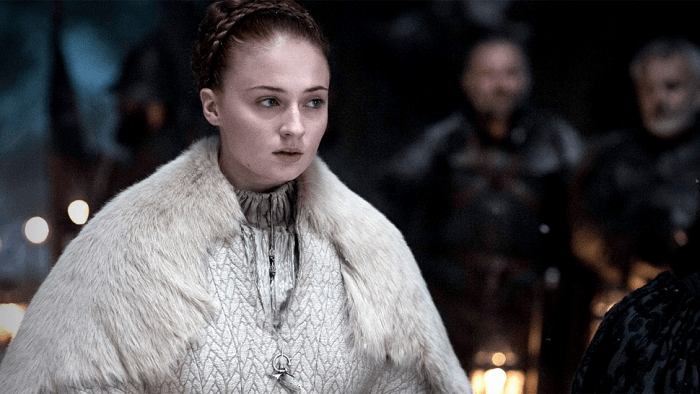 Audre Lorde watches the opening of Game of Thrones…

What people fail to realize about Arya is that scrubbing clean the 14th dead man of the day is not an act of service or submission to the house of Black and White, but it is actually an affirmation that she stands on the right side of cruelty, and therefore the right side of what keeps the world moving. She has taken these moments, the water, the sponge, a fear of drowning she no longer possesses, and placed them on the not yet decaying skin of another man she has outlived. If one cannot see the power in scrubbing clean something they fought like hell not to be (in this case, dead), then they will forever be surprised when their black and feudal clothing have been dampened by their own blood and Arya is there to scrub away their last committed sins.

‘Bobcut’ challenges Arya, but she knows the truth, ironically, while trying to teach Arya how to lie. She may be well conditioned or institutionalized or tenderized more than Arya but she knows that Arya is “deliberate and afraid of nothing.” How frightening this must be. How tragic and planet splitting it must be to learn that someone you consider beneath you has figured out the answers to questions you are afraid to ask. The game, is just that, a game. It is a pretty tablecloth over a dead boar. Arya is the one who won’t pretend she can’t smell the rot while the other dine until bursting.

It is not till later that Arya learns the real “game”, the consequences of honesty vs the truth in front of a man and how it often results in welts and blood in your mouth. Let us never wonder how a young girl can become a mature liar out of survival.

There is beauty in the knowing, but not nearly as much as in the unknown. Jorah, might have shaped a world where he served at the side of a beautiful queen that he loved, with the possibility of owning the world with her. But in the known, Jorah is cast out, turning to stone of skin and heart, while learning that he is fatherless. In the end, we are all fatherless, by choice, by propulsion or by the years that mark us.

In the house of Black and White, Arya watches another, a girl brought in that the world is obviously done with. I can imagine a line of such girls lined up outside of the monochrome doors. Arya tells her a story, a story vividly true in it’s falsehood. She has convinced this girl that something better awaits her on the other side, and in the way this world treats women, it’s possible that is truer than anything said between the two. For her efforts, Arya, is shown the secrets of the House, the basement where the living leave something after they have left altogether. This seems grand, but we women, call it growing up. What woman hasn’t had to wear a thousand faces just to move through the world? I understand how Tyrion and Jorah can argue about the larger meaning, how a god spins the world in his palm and makes all the people dance in his orbit, but I fixated on the land. I cannot understand walking through such beauty once you remember having ran through it before with it lapping at your face. These men, their faces, are not meant for such light. No, they born of privilege and names that didn’t get lost in some ocean. Tyrion killed his father and voluntarily crossed a body of water, but his name carried such a weight, it cost him his freedom. He is the un-slave by that estimation. When new slavers take them, they should remember not to blame themselves. 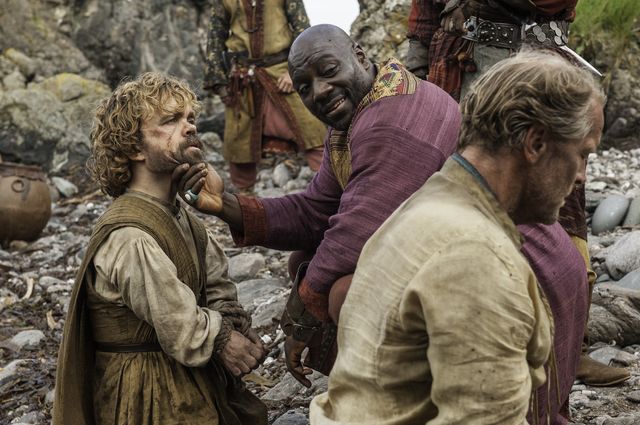 Remember that it has nothing to do with their pale skin or the abstract darkness of their captors. This is not hatred, or bigotry or even indifference to them as humans. It, simply, is a transaction. How could any man be faulted for that?

What is most entertaining about when Littlefinger tries to advise Queen Mother Cersei on what is wise, is the arrogance to believe that his advice matters. A queen doesn’t become one by tilting her throne to every persuasive eunuch made good. But the gods deal in degrees and I fear becoming queen and having men place you there for their own gain are two different matters. Still, I admit, when the crown whispers to you all the ways it plans to fall from your head, it’s the slow winding hiss that will become your gospel and unfortunately, Littlefinger’s tongue was forked well before it could form any words. I of course, had an excuse for Littlefinger is no Caesar, and could only hope to be the footnote of an ageless ruler. However, there are no doves in flight needed for ambition. They will always, be the trickiest devils.

Speaking of devils, I ask, have you ever been told by a man that the sand beneath you is not worthy? Have you ever smelled the nectar off the fingertips of a perfumed prince? If we are being honest, they smell like decay. Or at least what is remaining of your past tense beauty. Sure, they will pledge love and the sky and whatever planets hide behind the limit of your vision, but we all know how this story ends. When the fight occurs, they are not fighting for you. They are not fighting to save you from despair or allow you the choices you never had. They swing their swords for the chance to embolden you in their songs. In their glory. You are not worth the notes they will bellow. It is much easier, if you know this sooner rather than later.

If there is anyone that knows these truths, it is the Queen of Thorns herself. She figured out early that most power comes in the refusal to ever rule or be ruled.

There are worst names they whisper about her: bitter, angry, vengeful. But we know who she really is: a woman still living. These things don’t happen by accident. One wonders how many horrors were laid at Cersei’s feet where the slither of Littlefinger is greeted warmer than the prick of Lady Olenna’s vocabulary.

There is not much to say about the fate of poor Ser Loras except that if Egypt, one of the greatest civilizations in the history of being, imprisoned men who found the beauty in other men, the dungeons would have been too full for you simpletons to enjoy all the advancement that you do today.

Angela Davis remarks on watching the break of a little bird…

Sansa is a powder keg of possibility. Unfortunately, the possibility always lays in the hands of the men that possess her. If I say torture, what I mean is that your surname is a rosebush without the blooming flowers. The narrow path that enables Sansa to pass from young woman to the adulthood her mother promised her, often passes between men who are not quite satisfied playing with their toys yet.

That may be Ramsay Bolton or the showrunners themselves for that matter. Now you finally see the burden of womanhood and how it pertains to legacy. Congratulate Sansa as she carries her fathers name into a room where a sadist may take everything she believes in. Congratulate Sansa for the beautiful wedding gown that pools like blood on the dirty floor beneath her. Congratulate every woman that has the privilege of men telling them what they must endure to be great. Congratulate them on the hope they cradle to their chest after a man has peeled it off of his boot and left it for the hounds to play with. Tell me the celebration is en route. Tell me there is a cake large enough to hide inside of as soon as this over. But the real question is, did it work for you? Did you feel the agony, the pain and the violation as the camera zoomed in…on a man’s face. How very painful. That must have been. For him.