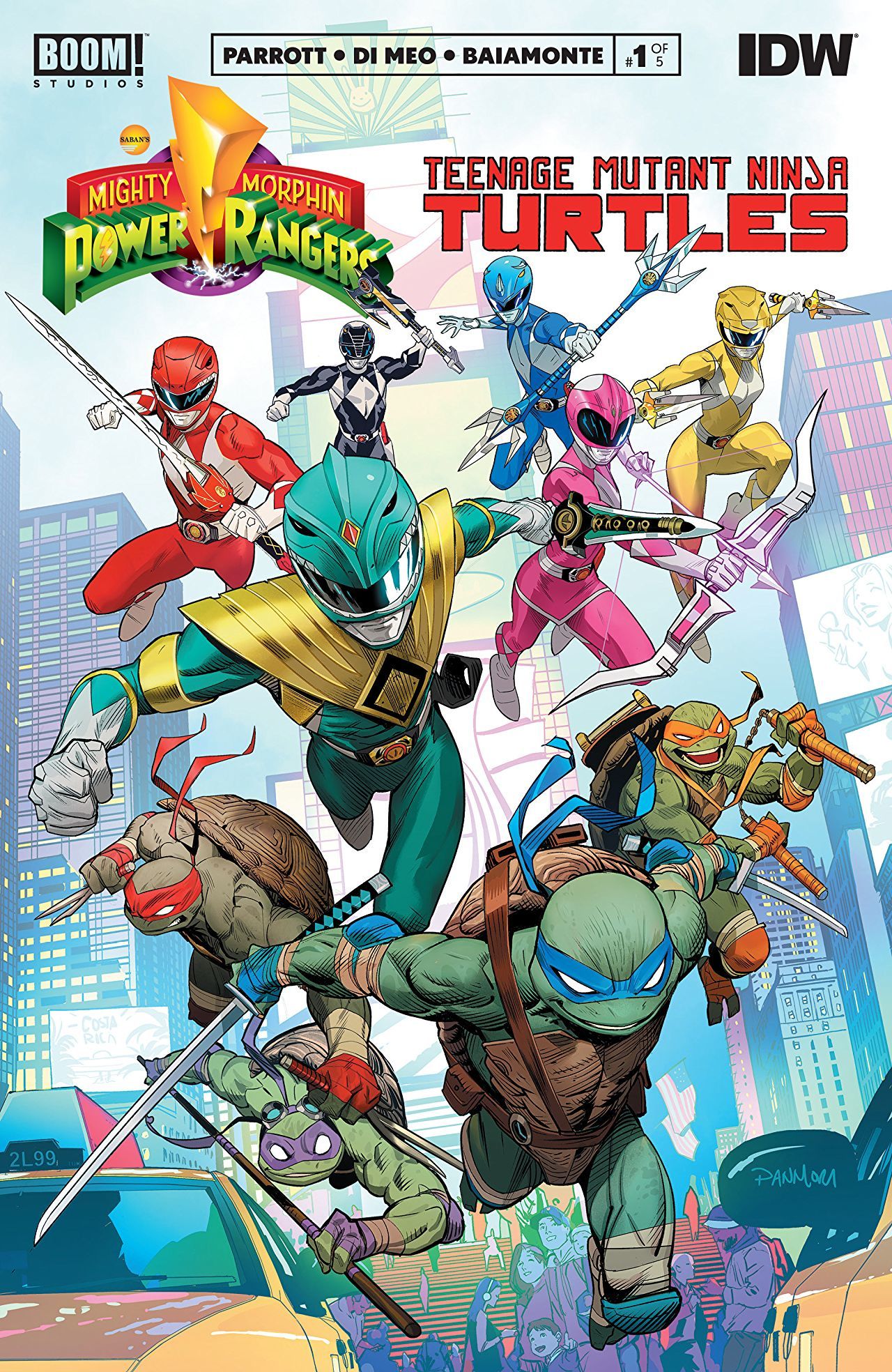 Look, I know what you’re thinking because I had the same thought when I first saw the cover. What type of strange 1990’s fever dream is this comic? The Mighty Morphin Power Rangers and the Teenage Mutant Ninja Turtles in the same book? It sounds bizarre, even in a timeline with the Power Rangers and Justice League have teamed up and the Ninja Turtles have spent more time with the Batfamily than Dick Grayson has as of late. But as odd as it sounds, there’s an oddly endearing, charming story about teamwork and cooperation within the pages of the inaugural issue of Mighty Morphin Power Rangers / Teenage Mutant Ninja Turtles. 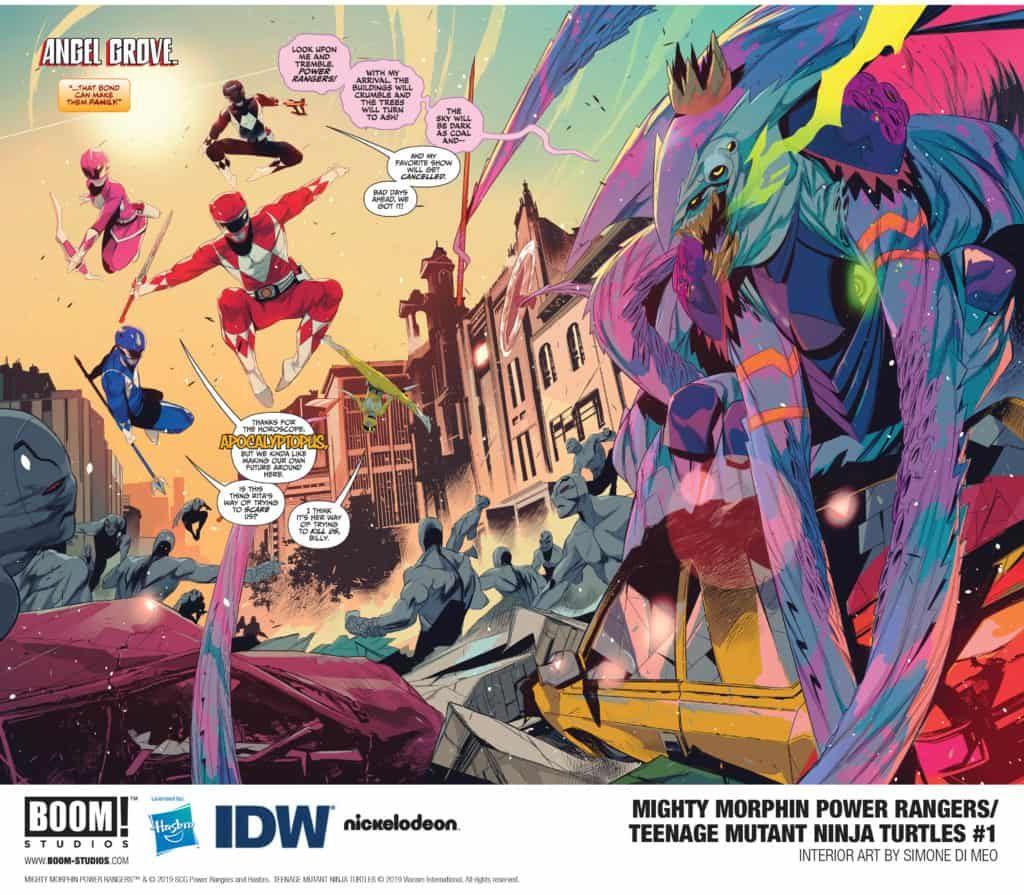 Right from the jump, the artistry of the book becomes apparent. Di Meo has a wonderfully playful rendition of both teams, clearly taking cues from the 1990’s source material, but there is a distinctively modern polish to the artwork. Each of the characters has a beautifully realized and stylized look to the point where even if they weren’t explicitly color coded you could still get a strong sense of who was which Ranger or Turtle based on body language and other iconography. The bright vibrant colors of Angel contrast wonderfully with the dark mystique of New York City and when the worlds collide it’s a wonderful visual meld that does both universes justice.

On top of all the natural giddiness that comes from just seeing two beloved franchises interact, the story itself is compelling. Mighty Morphin Power Rangers / Teenage Mutant Ninja Turtles is a self contained story that brings the two teams together in a way that makes TV sense and follows through on the execution. Parrott deftly handles writing both ensembles with quip laden dialogs that are in perfect sync with the memory of the characters. It’s been years since I’ve Jason, Trini, Billy, Zach, and Kimberley on screen, but the moment I read Parrott’s dialog, I heard their voices like a recording. The Teenage Mutant Ninja Turtles I’ve interacted with a bit more recently, but there were similar moments of aural clarity. There’s a playfulness in Parrott’s writing that permeates throughout the issue and allows the universes to meld seamlessly on a tonal level.

It’s a straight forward plot, but that’s honestly all this crossover needed. Parrott’s vision is elegant and quickly sets up the status quo for both teams before completely upending it with the primary conflict. It works both as nostalgia for long time fans and as a quirky, fun new story for people who are just intrigued by the alluring artwork. 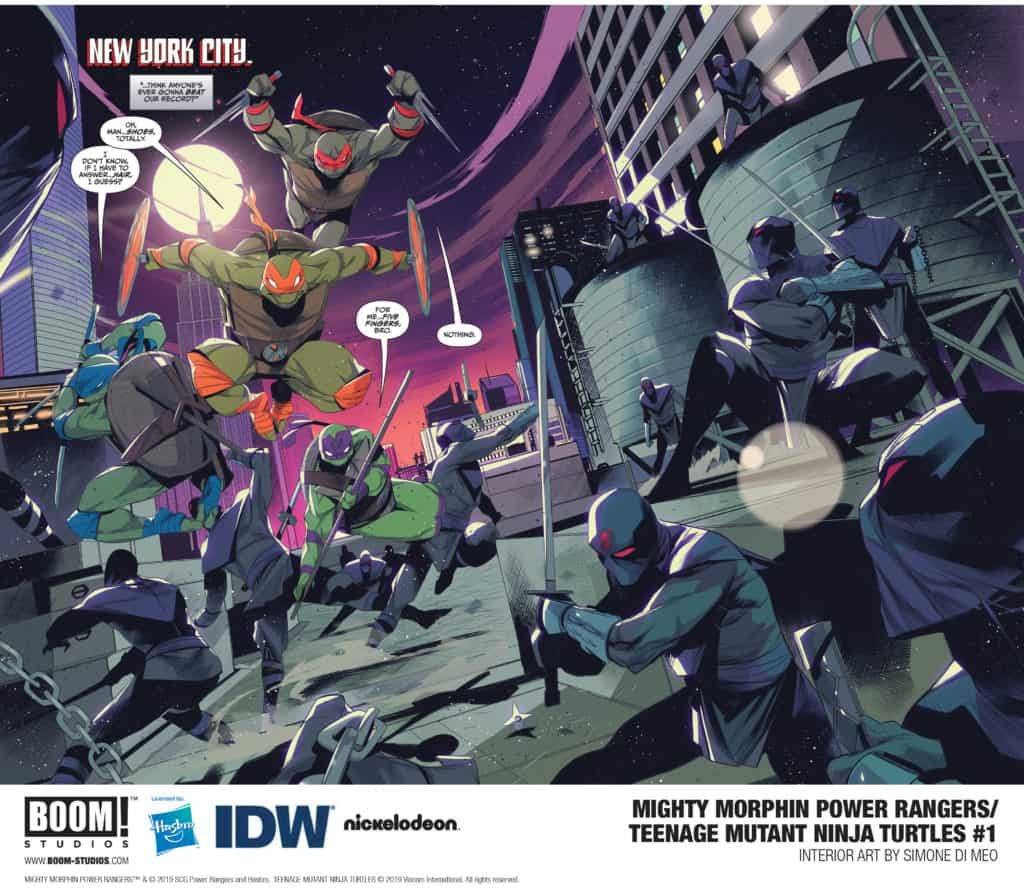 I’m not entirely sure where this idea came from, but I’m now entirely sold on it. Parrott’s writing and Di Meo’s art evoke the best shared elements of both universes and the resulting product is a fun jaunt that captures that one part of your brain that excitedly watched MMPR or TMNT every week, and I’m excited to experience the rest of the crossover.

And be sure to check out our interview with Ryan Parrott.