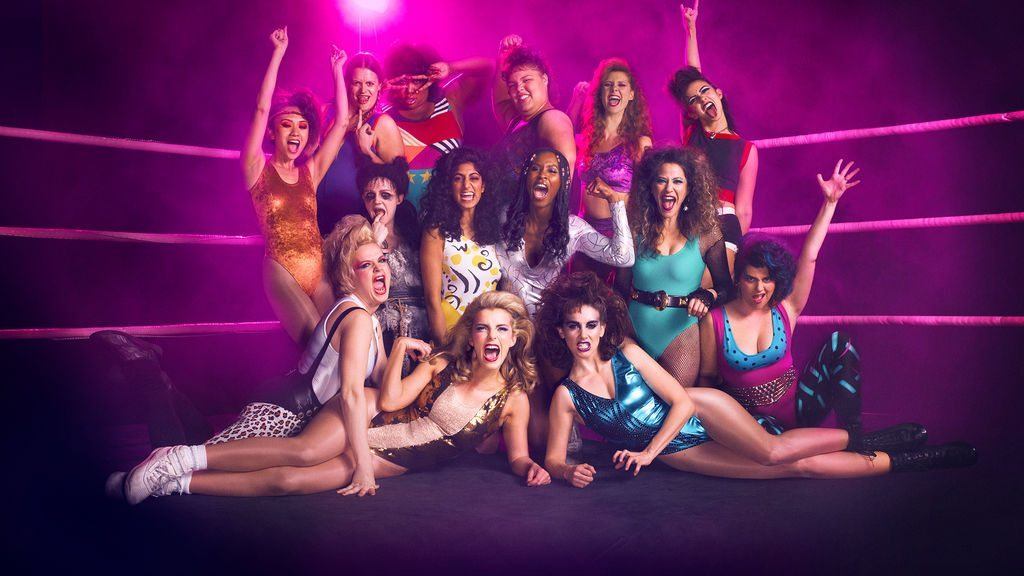 GLOW Season 2 gave me no warning before sucker punching me in the gut. It was a tumultuous ride that left me angry, hyped-up, teary-eyed, and amused. This 80s period piece about women wrestlers struggling to mark their place in television is inundated with difficult topics. Racism, homophobia, sexual harassment, divorce, the AIDS epidemic, and vicious misogyny run through the season. These themes are a constant stream during the show. These gorgeous ladies grapple with a world that demeans them and demands their labor for laughs, while making it clear that they are each expendable.

Season 2 starts off with Ruth (Alison Brie) dealing with the harsh misogyny of old-Hollywood (which mirrors modern-day standards and obstacles that actresses face). This theme is prevalent in S2. Many of these women have to baby mediocre and insecure men, mainly Sam Sylvia (Marc Maron) and Bash Howard (Chris Lowell).  Within this ten-episode whirlwind, we see these two men struggle with their own paths diverting into lands unknown. Sam evolves into his role as a father for Justine (Britt Baron). He cleans up his act, opens up, and truly cares about his daughter. Sam lays down practical rules, but NEVER asks her to compromise any part of her identity for the sake of authoritarian parenting. This, in a lot of ways, parallels Debbie’s (Betty Gilpin) storyline.

Still reeling from divorce proceedings with Mark (Rich Sommer), Debbie boldly negotiates her way into becoming a producer. However, she deals with her male co-producers subtle and not-so subtle sexist belittling. Simultaneously she tries to figure out motherhood on her own. How Debbie deals with the power struggle at her job as well as in her personal life is deeply rooted in the violent misogynist constructs that surround her every day of life. This also is a stark contrast to how she behaves towards her co-stars. Her wrestling persona as Liberty Belle and her real identity emphasize that women can only get ahead if the men in their life allow them too. Mark, for the most part “allowed” for a smooth transition, but what if he had put up a fight? What if he wanted sole custody or wanted the home they shared? Debbie gains the title of producer on GLOW and eventually makes decisions alongside Sam and Bash. However she is depicted as a washed-up soap opera actress who possesses the title that screams progress, but is still treated as a second-rate wannabe playing at being a boss. 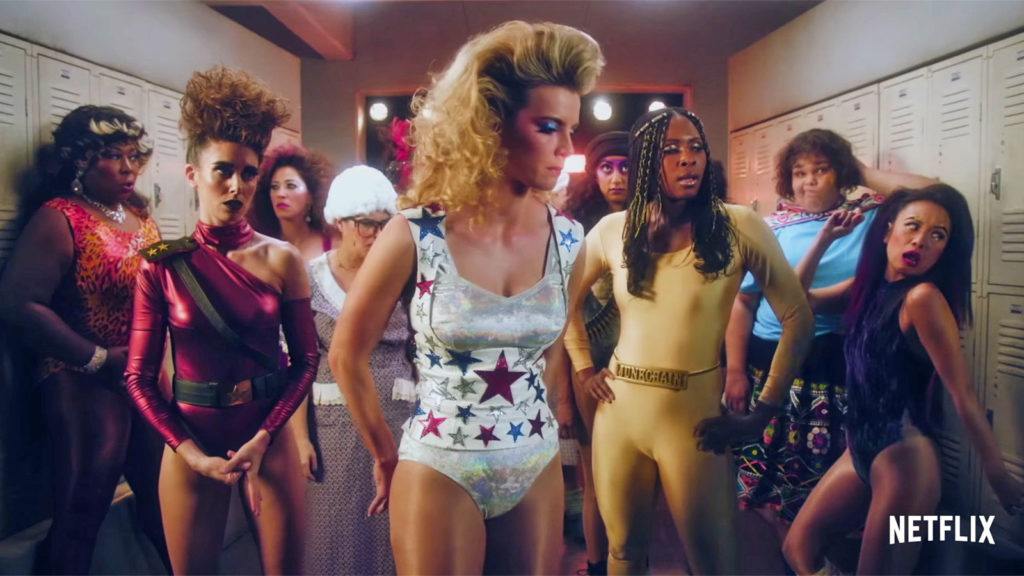 White Feminism At Its Worst

Debbie is the quintessential white feminist. She isn’t really about breaking down the barriers that keep ALL WOMEN beneath the heel of the patriarchy. Debbie just wants the same power that white cisgender, straight men hold. In a truly revolting scene, Ruth is manipulated into a situation where she was to be sexually used by a big-time executive at the station that owns GLOW. Ruth is luckily able to leave relatively unharmed. When she confides in Debbie how horrifying it was, the All-American Princess immediately lambastes her for not “playing the game.” Debbie accuses Ruth of pretty much being the reason the show will tank.

THE SHAMING WAS SO UGLY I couldn’t deal. It portrayed an image of what many white women expect their fellow women to tolerate: chronic abuse so that other women (mainly ones in positions of power) can rise to the top. This of course is at the center of white, male patriarchal supremacy, that has men dominate spheres of influence that often mistreat women. This in turn creates an environment where women turn against other women just to be able to try and get their fair share. It’s shameful and was uncomfortable to watch. We do get a tiny bit of justice from Sam, who reacts in fury at the mistreatment of Ruth and decides to play the hero on her behalf. It was stunning that this had to come from a man, and not the woman who was once a trusted friend of confidant of Ruth’s. The fact that the show can show these interactions in a genuine way is commendable.

Women of Color in the Ring

Joining the cast this season is Shakira Barrera who portrays Yolanda, an exotic dancer turned wrestler. She is an out Latinx lesbian, whose positive attitude and talented moves are a welcome shake-up to the GLOW family. Her storyline intersects with Arthie/Beirut’s (Sunita Mani) in a super cute and iconic way. For one, there is a dance dream sequence between the two of them. When I tell you my breath was taken from me, I’m saying it was like when Spongebob went into Sandy’s place with no water. It was so damn good, so ethereal and Cinderella-esque. I was reminded of the live-action Sailor Moon plays where it’s an all-femme cast and Tuxedo Mask could beguile everybody’s woman. It was THAT BEAUTIFUL. This is a South Asian medical school drop-out living the life that she chooses for herself. Seeing Arthie embrace her queerness on-screen is so damn important to me and so many other Brown girls. This kind of courage must be highlighted more often, and I am so excited to see what is in store for both of these characters in the future. 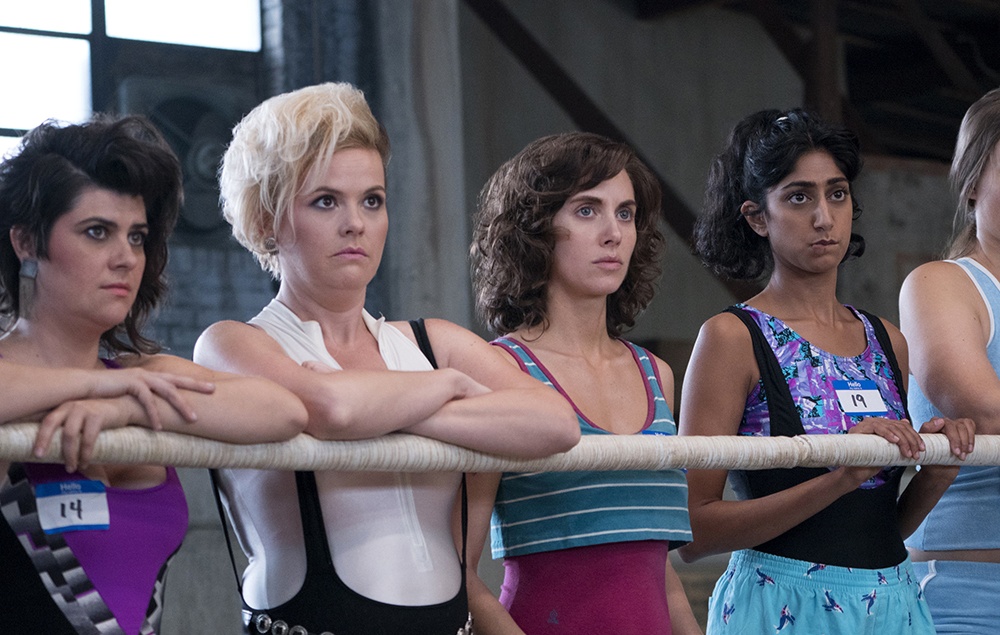 One episode that really got to me was when we explore who Tammé really is.  Tammé is shown as a compassionate, smart, and thoughtful person and a highly devoted mother. She has worked multiple jobs over the years to support her only child, who is a freshman at Stanford University. Although she avoids speaking about current occupation to her son, her cover is blown by a fan. Worried, her son goes back with her to watch the performance. He is visibly destroyed by watching his mother be degraded by her cast mates and the audience for her role as “Welfare Queen.”

This episode is shocking and heartbreaking. It throws you back into the real world where anti-blackness, colorism, and violent racism can’t be covered up with neon lights and sparkles. Kia Stevens does a fantastic job of portraying a woman who wants to flourish in her career while battling real-life stereotypes that impact not just her and her son’s life, but all of the Black community. This episode was raw and heartfelt. However, I worry about exploiting the pain of marginalized people for entertainment or shock value. I want GLOW to think more about their POC characters, and really discuss race in the 80s and how the fight today for racial justice and equality is both different and similar.

Ready for the Rematch

GLOW Season 2 is all about the journey that all these characters have been on. Some paths were connected, while others had to deal with their own emotional twists and turns. The ending, while hopeful, leaves room for doubt of further success. There is so much betting against these characters, and in the cutthroat world they live in. How much faith can they really have in one another and themselves? Season 3 will definitely test these bonds of friendship and love and the true meaning of woman power.

GLOW Season 2 premiers on Netflix on June 29th. The season consists of 10, thirty-minute episodes. Get your binge snacks ready!

Check out what else is coming to Netflix in June.