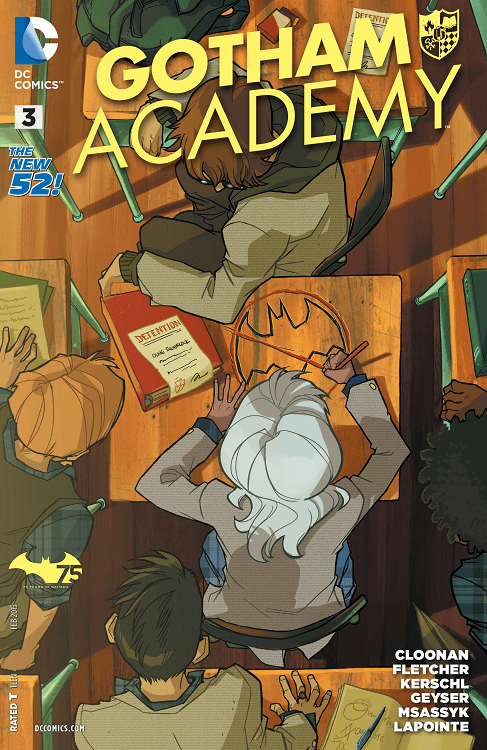 By now you’re sold on the awesomeness of Gotham Academy, and that makes this review even more fun to write. Has the series been running long enough to drop character references at lunch yet? Can I say “That girl keeps a scowl like Pomeline” in casual conversation? It’s probably too soon with other people, but you feel me. You know a real-life tagalong that reminds you of Maps, and the proud suspicion that she’s even smarter than you think. You remember feeling the teenage angst you see in Olive, even if it was back in 1999. We’re among friends here, so discard your etiquette and geek out with me.

Cloonan and Fletcher continue to introduce characters and have interesting subplots, all the while dropping breadcrumbs towards the larger mysteries to keep us enthralled. Issue 3 starts with Olive and Pomeline trying to solve the mystery of Millie Jane’s grave. Ignoring the fact these two girls are braver than me by strolling through graveyards at night, they also pass the Bechdel Test with their eyes closed and are just fun to read. Pom continues to be the overaggressive mean girl to Olive’s more subdued edge, which makes it all the more satisfying to read Olive scratching her armor and knocking Pom off balance even slightly. Can we take a moment to just talk about Pomeline? I mentioned after issue 2 I expected her to become one of my favorite characters, and the girl doesn’t disappoint. She’s assertive enough to be admirable, edgy enough to be cool, and dark enough to make you wonder what really makes her tick. Throw in that slightest hint of insecurity and she’s teenage Ashley Spinelli in Gotham City. A few more issues until she proves to be a tough shell exterior hiding a soft core, and her transformation to a hero will be complete. Pomeline is the homie you want behind you when it hits the fan. Speaking of characters to ride with, we finally get a full conversation with Kyle and he proves to be the most mature teenager since Laura Winslow. Kyle Mizoguchi pulls Olive for a much needed conversation, and instead of berating how she’s been handling her grief, he tells her to do whatever she needs, even if that means excluding him from her life for a while. Emotionally, Kyle Mizoguchi at 16 years old is the anti-Oliver Queen.

1. Who is blondie with the glowing red eyes?

2. Would you trust Colton Rivera?  Why not?

3. On a scale from 1 to evil, how many people will the Headmaster try to kill? He’s not even hiding it, dude’s a villain. I don’t care if he’s skinny; anyone who looks like Sabretooth on a low-carb diet is still dangerous.

Issue 3 continues Gotham Academy’s flawless pacing and fun character development. A few mysteries were added and we glanced at the Dark Knight himself on the Academy’s campus. If you haven’t started reading this series with your best friends, what are you waiting for? This issue alone had fire, ghosts, lock picks, and zombie hands. Don’t hog the joy, share it.