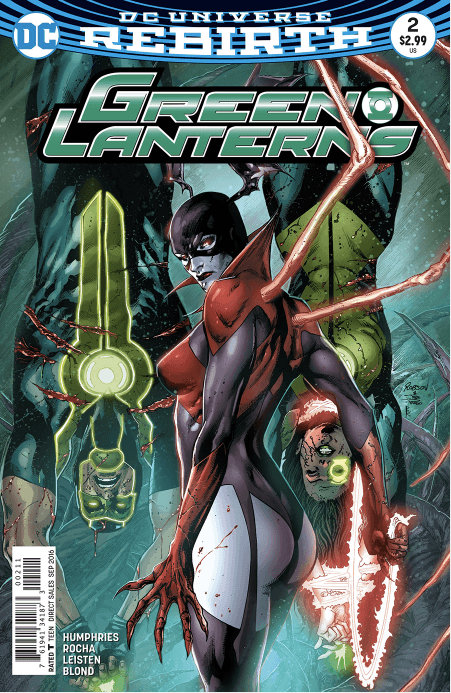 So, Black Nerd Problems spent a lot of time not covering Green Lantern books after Geoff Johns left because, honestly, they weren’t great and we had a hard time subjecting ourselves to them. But we figured this not-really-a-reboot DC is rolling out would be as good a time as any to give the franchise another chance. I mean, they’ve given us a book starring two PoC Green Lanterns so it seemed like they’re really trying to be inclusive over at the DC offices. So we figured, “What’s the worst that could happen?”

I thought the hardest part would be bringing myself to open the book. After the rough start the book got off to in Issue #1, the hardest part is actually opening Issue #2. Sam Humphries desperately wants us to like his “Lethal Weapon With Superpowers” approach to Green Lantern, pairing up the still gun-shy Jessica Cruz with the perpetually trigger happy Simon Baz. He wants us to buy into the stakes as the ever-tiring villains rear their constantly angry heads. The problem is execution.

Jessica Cruz’s struggle to fulfill her duties as a Lantern have so much potential to be entertaining and there are a couple of moments when she’s left to her own devices to shine. Then, the real villain gets in the way: Simon Baz. There are a couple of fun scenes with him, but Humphries is trying a little too hard to make this guy the Riggs to Cruz’s Murtaugh. Every time she stands a chance of being great or at least likable, Baz shows up being unnecessarily combative and macho basically for the sake of advancing the plot. As a matter of fact, the relationship Cruz is developing with her ring is more interesting and funny than the one she has with her partner.

Robson Rocha does his absolute best to breathe some life into Humphries’ script and, to be fair, is given plenty of room to do so. The action beats are fun and exciting and the power ring constructs look great. His pencils are actually shaping up to be the Jackie Chan to the script’s Chris Tucker.

Bottom Line: This really needs to be a solo Jessica Cruz book because Simon Baz wouldn’t be interesting if the Rock played him shirtless while handing out Hamilton tickets. It’s like his Green Lantern oath is “Because the plot demands it.” The sooner they rid the more interesting Lantern of this ball and chain, the better.