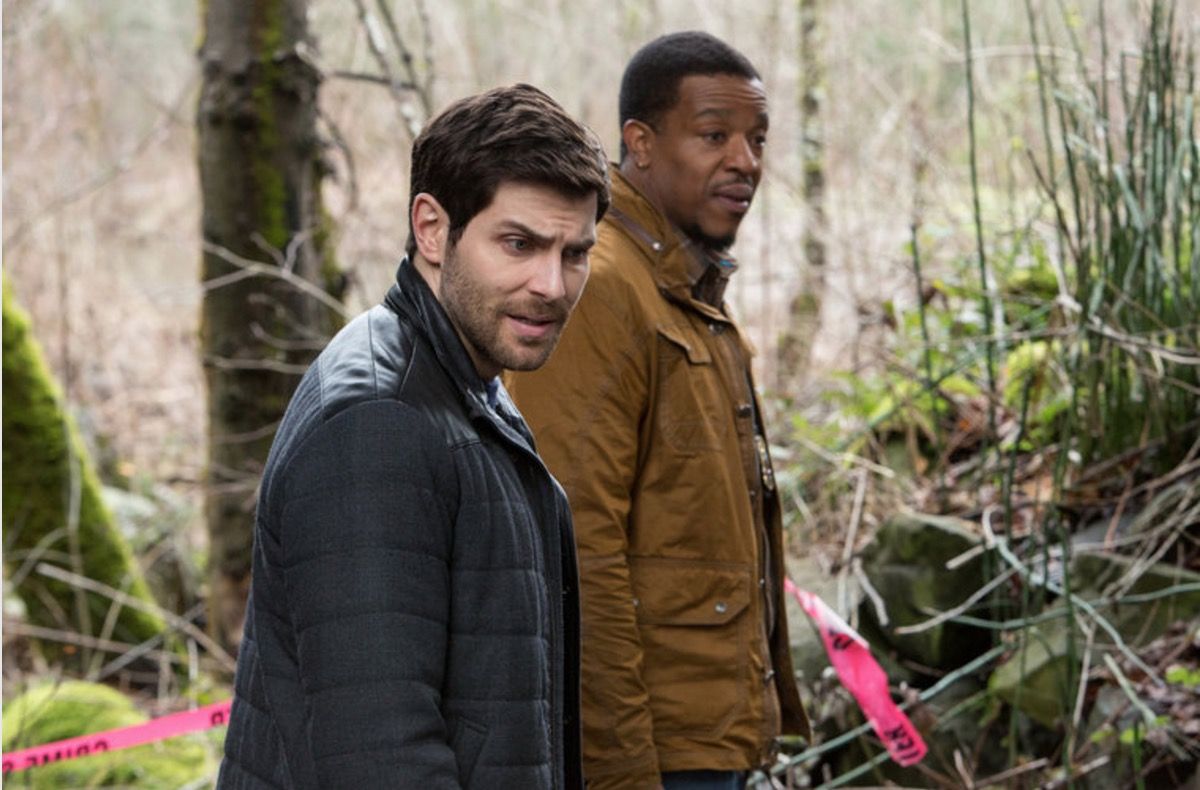 [quote_simple]Revenge is the act of passion, vengeance is an act of justice.[/quote_simple]

We start this week’s episode with two unsettling shots: someone ceremonially cleansing their katana and Eve hexenbiesting Nick’s car door open and getting in, cloaked like she’s on her way to grandmother’s house. We are left hanging about the sword for a bit, but Eve wastes no time in divulging the spoils of her recent… um… recon… with Rachel Woods.* Renard is cooperating with Black Claw. And she reminds Nick that Adalind’s hexenbiest suppressant will wear off and the dear, sweet Adalind he’s grown to know and love – have a complicated relationship with – will disappear. Then she steps back out into the rainy Portland night.

Somewhere else in moist Portland, a couple is getting ready to go out for the night when their angsty teenage son’s best friend, Roger, calls looking for him. The angsty kid is not answering his cell. He is, in fact, hiding in his parents’ basement playing video games.

His mom doesn’t force him to answer, but she does nag him until he agrees to call his friend back “as soon as [she] leaves” so obviously that was a lie. As the camera pans out, we see a hooded shadow outside the basement window.

The son, Brian, takes a break from playing video games to forage through the fridge for food. There’s a knock on the door. It’s Roger. Brian sends him away, but when he goes back downstairs, there’s an origami lion on the coffee table. Almost immediately there’s a Wesen inches away from Brian. He gets knocked unconscious.

Poor Brian is having a shitty night. When he wakes up, he is buried up to his neck. And then he’s decapitated with the very hygienic katana we saw earlier.

Nick tells Monroe and Rosalee everything that Eve told him: Renard, Rachel, and the Adalind warning.

And Rosalee gets her shifty “oh-shit” eyes and then says those words you never want to hear: “She didn’t say anything to you?” Then she spills everything about the Tony-with-the-broken-fingers story

And includes a bit of she is afraid you’ll kill her to help him understand. In keeping with their tradition of secrecy, they decide to not tell Adalind that Nick knows – ostensibly so she can tell him and somehow regain his trust.

Across town, in Renard’s bed, he and Rachel are post-coital and discussing his family plans; a married mayoral candidate is more likely to become Mayor.

Nick is still crawling around in the tunnels. But now he’s doing it late at night because he’s still hiding that magical German stick and lying about it to Adalind. He wakes her up and she takes the opportunity to tell Nick that she has an interview at her old law firm tomorrow. So it’s a Grimm and Hexenbiest in bed, both hiding and/or lying, discussing domestic matter. I don’t care what they say: these two are in a relationship.

In another bed in Portland, Wu is waking up breathless and disoriented. Luckily he sees a light (and fog) shining from underneath his bathroom door. He opens it and there is, of course, a magical forest. So he does what anybody would do: goes running. The next morning he wakes up and checks for the forest, but it’s just a forest. Except for the leaves on the floor.

Nick explains the whole tunnel situation to Monroe and Rosalee. He explains where he hid the stick, the door he pried open, and that he has no idea where the tunnel goes. He can’t exactly go spelunking with his hexenbiest girlfriend Adalind around. So Monroe and Rosalee volunteer to go exploring while she’s on her interview.

When Nick gets to the station he fils Hank in on everything (Renard and Adalind), too. That’s when they get the call about the head. They go investigate but there’s not much to go – no surveillance, no blood trail, no… body – so they will have to rely on missing person reports.

On Adalind’s interview, her old boss is delighted to see her. So glad that he okayed her bringing her kid. It’s all business as usual until her boss woges and tells her how they’ve missed having a hexenbiest on staff. Adalind woges. And Kelly looks on. Uh oh.

At the station, Wu brings Nick and Hank a missing person’s report. It’s Brian’s parents. They go see the parents and get a guided tour of the basement before they have to tell the parents that their kid was dead. The parents reveal why Brian was so angsty: he and his friend Roger accidentally shot and killed his friend last year and were convicted of accidental manslaughter a few weeks before.

When Nick finds the origami dog, Brian’s father gets angry, saying that Jin Akagi, the father of the boy Brian was convicted of killing, was behind Brian’s death. Seems logical. And then Nick and Hank get a call about a body… without a head. They leave to investigate. Wu is a little off his game (headache), but he gives them the guided tour of the body which is still buried up to the neck. The dedication to bury a body standing up isn’t lost on them. They’re discussing this when Brian’s mom calls Nick to say that her husband left in a rage to go to Jin Akagi’s house. He bursts in the door cursing and screaming and accusing Jin of murder. Aaaand then there’s a Wesen in his face and he gets knocked the fuck out.

When Hank and Nick get to the house, he’s still unconscious, but he wakes up talking about being attacked by an animal. The Akagis are pissed, but seem upset when Nick tells them that Brian was murdered last night. That upset quickly turns to anger when Nick notices the swords on the walls and asks them about their whereabouts the night before. They are quick to say, “lawyer.”

At the station, Akagi and his lawyer, Takeshi, produce an alibi for the night before. Then we get the first telling of Akagi’s son’s death: Brian and Roger were drinking, Roger brought out a gun, and Kuma was shot. Nick makes sure to ask if anyone else was in the house when Brian’s dad attacked them. Nope. So they basically tell him that they’re Wesen.

Meanwhile, Monroe and Rosalee are in the tunnel exploring. They open the huge rusty door, smell the stagnant water, and find a skeleton. After that last one, they quickly decide to end the day’s adventure.

Nick and Hank bring in Roger to get his side of the story. He recounts almost exactly what Akagi said. They were smoking and drinking when Kuma came over with his dad’s sword. Not to be outdone, Roger got his mother’s gun. Brian picked it up and accidentally shot Kuma.

They don’t believe him. And pulled that Austin Powers ask you three times trick. So then he retold the story: It all started out like he originally said, but when Brian accidentally shot Kuma, Kuma was hurt but okay. But, he woged. Brian dropped the gun and that was the shot that killed him. Obviously he didn’t say that in court.

When he explains how Brian was killed, they get the guilty it-wasn’t-me-but-I-know-what’s-going-on-kinda look. Inugami, a ghost dog. A guardian. A Wesen who is bound by honor to a family and who kills to protect them. Thing is, they don’t have a ghost dog. Or do they? Turns out to bind a ghost dog to your family you have to have saved their life. Mrs. Akagi’s dad once saved his childhood friend’s life. And that friend grew up to be the Akagi’s lawyer. It’s not looking good for Roger so Nick and Hank head to his house.

Back at the fome, Monroe and Rosalee are trying to get out of the creepy tunnel when Adalind comes back home. Well that’s awkward. Now they’re hiding in the tunnel until… well I don’t think they have a plan.

Not like the ghost dog lawyer who has knocked out Roger’s mom, the cop assigned to guard their house, and Roger. That dude is industrious. When Nick and Hank get there, he’s gone. Akagi suggests that the ritual honor killing has to happen near a body of water and bridge, so they head there.

Eve shows up unannounced at the fome. Monroe has front row seats for the most awkward conversation two hexenbiests ever had.

Eve warns Adalind that Black Claw will try to draw her in because she’s a hexenbiest. When Adalind denies being a hexenbiest, Eve calls her out. Then very nicely explains what will happen to her if she hurts Nick. Then, she leaves. Adalind probably had to check her drawers after that. Nick, Hank, and Akagi find Takeshi in mid-bout-to-kill-Roger. Akagi asks him to stop, but my dude seems really dedicated to the honor killing. Nick stop him and antics ensue, but it’s Hank (and his gun) that end it. They take Takeshi in. At Sean’s house, Rachel surprises him… with Diana.

*I have serious ethical issues with this rape-y storyline.

So many questions: Why does Eve care what happens to Nick beyond his usefulness? How many times is Wu going to get screwed over because he hangs out with a Grimm? Will Monroe and Rosalee live in that tunnel forever now? Why doesn’t HW “retrain” Adalind?