We open as Nick, Adalind, and Kelly are packing up preparing to leave Nick’s house because clearly their real estate agent is a beast. They’re reminiscing about being each other’s first (Nick’s first woge and Adalind’s first time seeing someone who could literally see into her soul #awwww).

Monroe and Rosalee are at the shop counting them receipts and feeling generally good when Rosalee moves a bottle and sees a bullet hole. It’s a reminder of what hexenbeist Juliette was capable of: controlling Nick and, if Hank hadn’t tackled him, shooting Monroe. I guess because they are both fundamentally good people (?), they start to miss the old not-constantly-trying-to-kill-them Juliette.

Cut to the woods and the woman running through it barefoot. Cue the group of ragamuffins that are chasing her and screaming, “Mother! Mother!” She loves them so much that she is hauling ass and looking back in terror when she trips, hit her head, and dies. The kids circle around her body and wonder how she could do this to them. Yes, by “this” I mean die. So we’re firmly in unhealthy relationship territory. As they talk about her and finding another “mother,” their eyes light up and not in glow-of-love way. These are obviously wesen children. One of the kids, Big John, cuts a lock of her hair as the others scurry back into the woods. They’re still there watching when a passerby finds her body and calls for help.

Nick takes Adalind to a paint factory or as he likes to call it “home sweet home.” Adalind is rightly like, “you know we have a baby so all this rusty nail shit is a bit troubling.” But Nick types an access code (0815 because I’m a creeper like that) into a hidden keypad and takes her into their actual new place. It’s barren, but it is a legit safe house: there’s an entrance to secret tunnels under the city from the era of Prohibition, three-inch steel barn-door shutters on the windows, and a secure back exit. I guess when some beheads your mother, kidnaps your protege, and steals the (probably not) corpse of your evil ex-fiance you get a little cautious. Adalind is with it. She got a dead mom and missing kid, too.

Back in the woods with the creepy ass orphans, Big John is blaming himself for mother’s escape. He puts the lock of hair into a box and – woah! – there are too many locks of hair in there for my comfort. Meanwhile, the Smurfette of the group, is sick. They need to go into town to get medicine despite what happened “last time.” Well, that sounds ominous.

In the same forest, Nick, Hank, and Wu are processing the body of the dead mother, a woman named Wendy who has been missing for over 2 years.

Martin shows up at Renard’s office. What? You kidnap dude’s baby from the other kidnappers (and work with Chavez who kidnapped Trubel and probably Juliette) and you just gonna show up at his job?

Renard is like why are you here? Martin is like I thought you should know that the King had an accident… over the ocean… and the body hasn’t been found… and neither has the helicopter (from the season 4 finale). BUT your kid is alive. Also, there’s some Game of Thrones type shit going on with the royals: Victor was pissed, struck a deal with the Resistance, and killed your dad. #sorry.

The orphans are at the drug store about to steal medicine for Smurfette when they see a kid being scolded for, I assume, being an asshole as kids are wont to do. Big John’s eyes go red again and his friend is like, “um, did you like foster care?” and away go the eyes. Now Grimm is really offering up that lowkey indictment of the foster care system in America and I’m not particularly mad at them (looks at Whoopi Goldberg’s guest role of Law and Order: Special Victims Unit earlier this year). A cop comes in and they bounce.

Nick and Hank are still working the case, looking at footage of the last time mother Wendy Hinley was seen alive: in a parking lot in the company of a little girl. Because being a woman is statistically dangerous and we’re most likely to be killed by an intimate partner, her husband was the prime suspect. Hank and Nick prepare to go confront him with the news that his wife’s body has been found to see if he reacts…I mean, guilty or not, who wouldn’t react?

While this is happening the two thieving orphans who just left the drugstore show up at the Spice Shop. They do the distract and grab ploy, but Rosalee catches one as they run out of the door. He woges. Rosalee is like, “Motherfucker you don’t know my life” and tackles him to the ground. Again, because she’s a good person, she listens to his abbreviated tale of orphanhood/sick sister and gives him the medicine. As Monroe comes back in, the kid runs out the door. Monroe has the exact perfect reaction: “You caught the shoplifter and not only gave him medicine, you let him go?” He actually uses the phrase “lying bastards.” I knew I liked him. He goes to fix a clock or something. 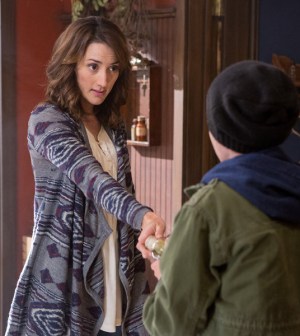 Wendy’s husband is identifying her body at the morgue. Evidently his grief seems sincere enough; Hank and Nick look kind of ashamed that the cops tossed his whole life two years ago. They’re not the only ones thinking of Wendy or at least Wendy-replacement. In the woods, Big John is fondly thinking about Rosalee’s hair.

Amidst all of this, Adalind runs into an old colleague who is like “What have been up to? Oh, a baby. Oh, Austria. Oh my. Oh you should come back to the firm.” We can see Adalind’s gears turning.

So of course the kids show back up at the Spice Shop and while Smurfette, whose name is Lily, distracts Rosalee, Peter chloroforms her. Monroe, on the phone, overhears this and runs back to the shop. He calls Nick.

Rosalee wakes up in the back of a pickup truck driven by Big John. Peter says they’re going “home.” Rosalee is not having it; she puts on her mom voice and everything. But they threaten her with Big John. And creepy Smurfette is all “we’re gonna be bunkmates. Whee!”

Monroe, Nick, and Hank are at the police station looking at surveillance footage from outside the shop. Nick notices a truck. They double-check the Wendy Hinley kidnapping footage: same truck. Monroe asks what happened to the lady from the other tape. When Hank and Nick exchange “welp” looks, he’s like take me to the morgue. I’m ‘bout to remind you what I am. So he’s down there sniffing corpses.

Peter is in the woods trying to pep-talk Rosalee into being a devoted surrogate mother. So of course, like any emotionally healthy kid, he threatens to kill her if she doesn’t adequately love him. (Mental note: hug my kid more.)

So Monroe is out in the woods sniffing and woging and sniffing and woging. Nick and Hank are weirded out, but following Monroe. Rosalee, also freaked out, is surrounded by kids who have all brought her food (like cats bring dead shit) and won’t stop calling her “mother.” They ask for a bedtime story. Rosalee starts the tale of the Grimm who Killed a Motherfucker like you. Oddly, they all fall asleep. So she ghosts. Riiiiight into a trap.

They come find her and get her out of the pit she’s fallen into. They call her a bad mom and woge; I guess they intend to kill her. But, she has had enough and woges her damn self. Smurfette is like “Ooooh shit. Her face is like mine! She’s my real mom!”

Monroe and crew burst onto the scene as all this is happening and Monroe almost punches a kid in his wesen face. Rosalee, back to being a good person, is like “No!” Flash forward to the precinct. The kids are about to go back into the system that failed them and everyone seems to have forgotten that they kidnapped and tormented Wendy for two years. Because I didn’t.

Back at Nick’s safehouse, Adalind is awake and restless and wants to talk to Nick. By talk to Nick, I mean she wants Nick to sleep in the room with her and the baby, Kelly. So he does and they both lie awake like… well like two people with building sexual tension lying in a bed together with a little baby cockblocker in the corner.

Monroe and Rosalee are back home sitting inside all the sadness and feeling she has about abandoning those kids. She knows that they don’t know who they are or what they are. Or what Grimms are. And as she wishes them emotional well-being, we cut to a scene of them being admitted to what is essentially Prof. X’s school for Criminally Delinquent Wesen Boys (and Uprising School). Soooo…. I guess she should get her hopes up.

The teaser at the end of this episode was a shot of Martin telling Trubel “It’s time” before she stood up, bruised, and walked out of her cell.

So how long has the world’s worst school been in business? And who’s the valedictorian? What is it time for, Martin? And how long before Juliette resurfaces and throws a wrench in the world’s most awkward romance?