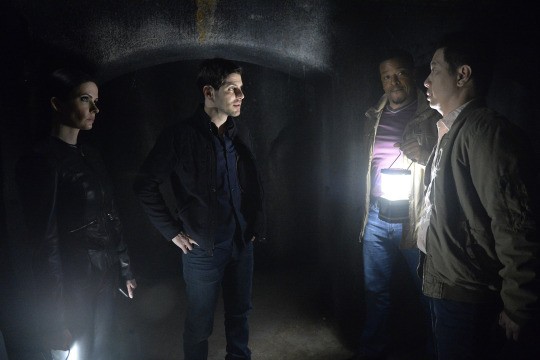 Monroe walks out the spice shop’s back room just in time to see and hear a cop checking the place out, flashlight peering in the windows and all. Since the whole gang—Nick, Juleve, Rosalee, Wu, and Hank—is in the basement and Nick is Portland’s Most Wanted, they don’t exactly feel protected or served. Nick and Juleve leave to take some of the heat off. Rosalee is going to keep trying to find the origins of the symbols Diana saw on the (magic stick) cloth and drew. Nick grabs the cloth and Juleve snaps a picture of everything.

Back at Casa de Dead Bonaparte, Adalind is staring at the cursed ring Bonaparte put on her when he forced her to get engaged to Renard. Since the threat was that if she took it off then her children would suffer great pain, I’m rooting for her to take it off. Because, welp, I don’t like Diana at all. Her and purple-eyed evil can get on.

Renard comes home from a long day of double-crossing Adalind and Nick, just in time to threaten her about being a supportive First Lady of Portland. So, hold up, why is Renard in season 6 acting like Renard in season 1 when he had literally four seasons of change and character development? What is happening here? Also, even if he is truly evil and all that working with Nick was a façade (what?!?!) wouldn’t self-preservation alone make him be a little nicer the hellspawn’s mom or is he counting on her being a daddy’s girl?

In the tunnels under the loft, Nick (under the watchful eye of Juleve) puts the stick in a box. But it ain’t easy. Nick is visibly Gollum-ing for the stick. Out of nowhere, Juleve is on some “You love Adalind and that ain’t a question.” So I guess in the internal boxing match, Juliette is clawing her way to the service. At the station, Hank and Wu resign. But not before Wu almost lycanthropia-woges in pure rage at Renard. Luckily no one sees him but Hank. I wonder how long he’ll be able to keep that secret. Or if he has a full moon safe room.


[divider type=”space_thin”]
Nick and Juleve are still trying to find some meaning from the symbols Diana drew. They’e still baffled that only she could see them and they ask the very scary question: did the crusaders put the symbols on the cloth or were they already there when they got the cloth? Because if the Crusaders didn’t, then… who… what… so these are the symbols you saw in hell, huh, Juleve, when a literal dead person reached up and grabbed your arm? And Diana just saw them like they were graffiti on the side of a train? [exits]. Juleve remembers what Nick’s mom said about hellspawn having an extraordinary destiny. But that it could go either way: evil or good.

Hank and Wu show up in the tunnels. I mean they’re unemployed now so where do they have to be? Because Renard is just Mayor-elect he doesn’t have the full force and weight of Portland’s resources… yet. But he will. [looks at camera, looks at news, starts to weep silently]. Nick gets the bright idea to do a body double spell. You know the spell? The one Eve used to become Renard and get information from Rachel Wood. By get information, I mean sleep with. By sleep with, I mean rape. The same spell Adalind used to get revenge on Nick and steal his powers. And by steal his powers I mean sleep with him. And by sleep with him I mean rape him.

This, this is why I can never fully get on the Nadalind ship. I understand that at this point the two of them have a kid (a product of that rape) and have spent a lot of time together and maybe Nick truly loves her and has forgiven her, but… but… but the rape, yo. That has never fully been addressed and I need it to be. [sigh].

So here we are with Nick wanting what has historically been a pre-cursor to rape on the show: the body double spell. So of course, his friends are like “This sounds like a bad dangerous idea; you should totally do it.” Nick calls up Adalind and tells her his plan and why does she sound jealous that Juleve is about to do this spell? She agrees to get some of Renard’s hair for the spell.

While the “good” guys are across town trying to out bad decision each other, Jeremiah (who worked on Renard’s campaign) comes knocking on Renard’s door trying to run him for the jewels on some “I know you killed Rachel. I loved her and she was my friend, but for the low low price of what you got in the bank, I can forget all that.” He officially just put himself in the bad decision Olympics.

Moments after his extortion meeting, Renard meets with the Wesen Who Would Be Captain and delivers the most porn-worthy line anyone has ever uttered: “Before I announce my decision, you’re going to have to prove your loyalty… and not just to the Mayor’s office, but to me.” And this not-yet-the-captain leans forward and says, “I’m ready anytime.” I have seen this movie. Rosalee is at the spice shop whipping up body switching potions. Monroe heads to Renard’s house to get some hair from Adalind. Of course Renard shows up while Monroe is there and he has to hide in the closet. Of course he is. But Monroe makes it out and gets back to the spice shop in time to support Nick’s bad choices like a good friend.

At Jeremiah-the-blackmailer’s house, Renard shows up with a briefcase full of cash… and a not-yet-captain who sneaks up behind Jeremiah and rips his throat out. Oh. Oh, so that’s what you meant by loyalty? Sure.

Nick is about to huff green smoke out of a witch’s hat when it occurs to them all that 1) maybe—just maybe—this spell might have a different effect on a Grimm than expected and 2) he should take off his clothes because, y’know, Renard is taller than him.


[divider type=”space_thin”]
So Nick becomes Renard and antics ensue. Nick basically ruins his life: he holds a press conference and announces that he doesn’t want to be Mayor, that Nick Burkhardt is a fine, upstanding police officer who was part of an extensive undercover operation, reinsates Hank and Wu, and pisses off The Throat Ripper Who Would Be Captain by saying he intends to serve Portland as continuing on as Captain. I mean, I might have announced my retirement or confessed to the murder of Rachel Wood, but that’s just me.

Nick does steal Renard’s computer and a bunch of files from his office hoping to get the low on Black Claw.

At their home, Adalind is trying to get Renard stay home long enough to see the news so he can witness himself… ruining his life. It’s hard, but she manages. As soon as he sees, he runs to the station, where he’s faced with reporters from the press conference. There’s nothing he can say that will not make him look inconsistent or unstable.

Back at the spice shop, Nick… is still Renard. The spell isn’t wearing off. And that’s why Nick is still Renard when the real Renard calls and requests a face-to-face talk. And that’s how we get a Renard v. Renard fist fight on the roof of the loft.

Now, I’ll believe a lot of stuff. What I won’t believe is Nicard on the roof negotiating custody of Adalind’s kids as a part of his “truce” with Renard. Is you crazy? Only one of those kids is yours, Nick, and you have no none nan nary say in how she handles co-parenting and timesharing with the other one’s dad. What in the hypermasculine Father Knows Best bullshit is this? I. Can. Not.

Meanwhile, Hank goes to get Adalind and the kids just in case Renard plans to hurt Kelly to get to Nick.

So when Diana shows up and sees her “Dad,” well she’s happy… until she’s not.

Welp, that fixed the spell that wouldn’t go away.

Back at Casa de Lonely Renard, a voice taunts him from the shadows:

I have so many questions: where did Nick get his degree in social work? When is Juleve gonna come clean and say outloud that she feels feels again and specifically that she loves Nick? When is Nick going to get the post-trauma counseling that he needs? What happens if Adalind takes the ring off?