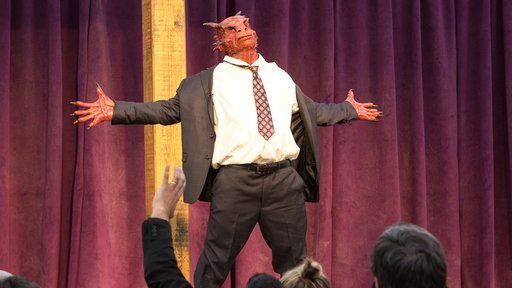 Nick and Hank tell Monroe and Rosalee all that Eve told Nick about Rachel Wood and Andrew Dixon’s assassination. As they put it all together and realize how high the stakes are – if Renard is in with Black Claw, he knows a lot – and decide that they need to play their cards close to their chest until they can figure out where Renard’s loyalties lie.

Monroe reaches out to his nerd network and contacts a professor friend of his, Ian Kreger, about the old cloth artifact (the one the magic stick was wrapped in) that he inherited from his Uncle Felix (that’s the lie he’s going with).  Monroe is on the phone with Kreger setting up a time to bring the cloth to Kreger while Eve arrives unannounced, at the Spice Shop.

[divider type=”space_thin”]
Eve tells Nick, Hank, Monroe, and Rosalee about her experiment with smoking the witch-hat-fog (at the end of last episode) and her foray into Renard-ness. Eve who is not usually so forthcoming tells them that she needs their help; she needs to know where Renard is so she can be him someplace else. Then she leaves abruptly and leaves the four of them to ponder the logistics of her turning into Renard.

Cut to a religious tent revival. There’s a preacher onstage. He beckons to Satan to leave his parishioners alone, to instead to come to him. And then Satan does. Or at least that what it seems like to the people in the cheap seats; we know he woged.

In the audience, a man is not so inconspicuously filming this “possession” and the preacher’s eventual triumph of the devil. The ametuer doxumentarian hustles out the door but is followed by security. After a scuffle, the security guard Luke falls and hits head on a rock. Uh oh. The filmmaker gets into a waiting car and speeds away. His fellow security guards call the cops and the Wesen unit, Nick, Hank, and Wu, arrive to investigate.

Nick and Hank talk to the preacher, Dwight Eleazar. The preacher tells them that no one is allowed to record the services because he, “lets himself become possessed by Stan and then he casts him out with his faith.” Because this possession is frightening, he often receives death threats and so he doesn’t let people film for fear it would provoke more fear and violence.

Across town, the filmmaker arrives at a storefront church and shows the footage to a small group of worshippers. They believe that Eleazar is possessed by the devil and that they either need to kill him (because he’s misleading the faithful and taking their money) or help him by driving the devil out.

At the station, Hank finds out that all of the security guards have criminal records, but that they seem to get on the straight and narrow after joining Eleazar’s crew. Between that and the public testimonies that the preacher is literally possessed by the devil, they decide to go to the next service (tomorrow).

Meanwhile Renard is entering the mayoral race in earnest by having his first mini-debate, on a local morning news show, with his opponent.  At the fortress, Adalind is watching when Nick comes home. Neither of them is sure Renard would make a good mayor or if they trust him at all. Adalind pivots and asks Nick about Diana. If he was wrong about Juliette being on that helicopter, could he have been wrong about Diana being on it as well? Maybe. Nick kisses her. It’s not a passionate kiss, but it seems intimate. And yet, we know that each of them is still lying to the other overly or through omission.

The next morning, Nick is at the station early looking for traces of Diana when Wu lets him and Hank know that the car that was seen leaving the tent revival was spotted. They IDed the owner as Benjamin McCullough.

Inside the church, young Benjamin is making plans to move on Eleazar “tonight.” A blond woman, who seems to be in charge, gives him a small pouch and tells him that they have to act tonight. He’s walking to his car when the police arrive to arrest him and impound his vehicle. When they search him, we find out that the pouch is filled with gold coins.

When Benjamin is put in a lineup, the other security guards pick him out. Research shows that Benjamin and the blonde woman, Joan Vark, also have criminal records that stop. Seems like religion has been good to/for most of the people in the episode.

Wu, meanwhile, is having some physical issue. He keeps rubbing his neck like it’s sore and, then, his visual goes blurry while he’s looking at the computer. Hmmm. Let’s not forget that he had a close encounter that could have lasting effects.

Nick and Hank interrogate Benjamin. He tells them that Eleazar is possessed and stealing from his worshippers in god’s name. So Nick asks him about the over $12,000 worth of gold coins he had on him. Evidently those coins belong to god. Uh Huh. By god, he means the church that his friend Joan Vark, a “true prophet,” runs. Benjamin urges them to look at the video he recorded at the revival to see the possession for themselves. When Nick and Hank see the footage, they go to Rosalee and Monroe who immediately identify the Wesen as a Furis Rubian.

Nick and the crew go to the revival and see the onstage woge for themselves. They seem torn; Eleazar is doing good or so it would seem based on his parishioners’ faith.

While they ponder this, one of Eleazar’s security guards, Mark, goes to the parking lot and meets Joan Vark. He asks where his money is. Ah, so that’s what the super symbolic pouch of 12 gold pieces was for. Joan doesn’t have the money (because the police have it) but assures him that he’ll get it afterwards. He is genuinely torn; he seems to believe in Eleazar.

At HW,  Eve is huffing that green fog and trying on Renard’s abs for size.

Nick and Hank talk to Mark after Rosalee and Monroe leave and ask about protocol for people who record at the show. They’re trying to establish if Eleazar’s instructions to his cre caused Luke’s death. Then they talk to Eleazar himself. Nick tells him that he knows he’s a Furis Rubian. Hank asks him if he’s interested in god or just the money. Eleazar’s answers imply that he is in it for the god aspect. He says he “deal[s] hope.” Hmmm. But what else would he say? Then they leave (which always seems to confuse Wesen).

Later that evening, Mark knocks on Eleazar’s trailer. The other christian faction come in right behind him and kidnap Eleazar.

Nick and Hank figure out that since no one realizes Eleazar is a Wesen, then Joan, Benjamin, and their church might want to kill him or “save” him. They decide to release Benjamin and follow him, hoping he’ll lead them to whatever the church was going to use that $12k to pay for.

As they talk, Eve/Renard calls to see where the real Renard is. She wants Nick to keep him busy for a few hours. Wu reveals that he discovered that Joan Vark and Dwight Eleazar were married. Nick and Hank enlist Renard to help follow Benjamin under the pretense that since it’s a Wesen case without a lot of evidence, Renard’s help would be useful.

Eve/Renard is at Renard’s house when Rachel Wood shows up. What follows is maybe the most awkward sex/non-sex scene ever. (Let me qualify that by saying, I’ve dated my fair share of nerds and this beats that hands down.) Rachel Wood is about it so when Eve/Renard is essentially on some “let’s talk Black Claw,” she shuts it down with a “we can talk after the orgasms I came here for.” Oh the look of Eve/Renard’s face was perfect. Oh you weren’t prepared for that deep cover, huh, Eve?

So while Rachel is trying to get hers, Joan is in her church with Eleazar chained to the ground in the middle of a pentagram about to embark on a good ol’ fashioned exorcism.

Nick, Hank, and Renard follow her partner in (literal) crime, Benjamin, to the revival tent. He still owed Mark for his help in kidnapping the preacher. But they watch as Benjamin runs into and out of the tent a little too quickly. When they investigate they find that Mark has hanged himself.

Renard and Rachel are having an awkward “this never happened before” moment as Benjamin is running into the church and accusing Eleazar of making Mark hang himself. Oh, and stabbing him in the side with red hot pokers. What the-

[divider type=”space_thin”]
After a struggle, Eleazar collapses and his ex-wife tells him she loves him. What th- He dies after telling her that she saved him. That was a sweet gift to give your killer. Nick, my dude, doesn’t hesitate to arrest them all because saving or no saving there are the issues of the kidnapping, red hot pokers, and ultimately murder. Monroe is at his nerdy friend Ian’s office looking at the cloth. They are looking at it using a bunch of high tech equipment that makes the writing on it slightly more legible. Back at the spice shop, Monroe, Nick, and Rosalee are working to translate the words they can make out in archaic latin: miraculum periculosum.

So many questions: What the hell does the magic stick do? What is happening to Wu? If Eve/Renard’s and Renard/Renard’s perfect abs touch, will it create a rip in the space-time continuum? Were some of my exes hexenbiest dopplegangers? /is Renard in Black Claw or just Back Claw adjacent?