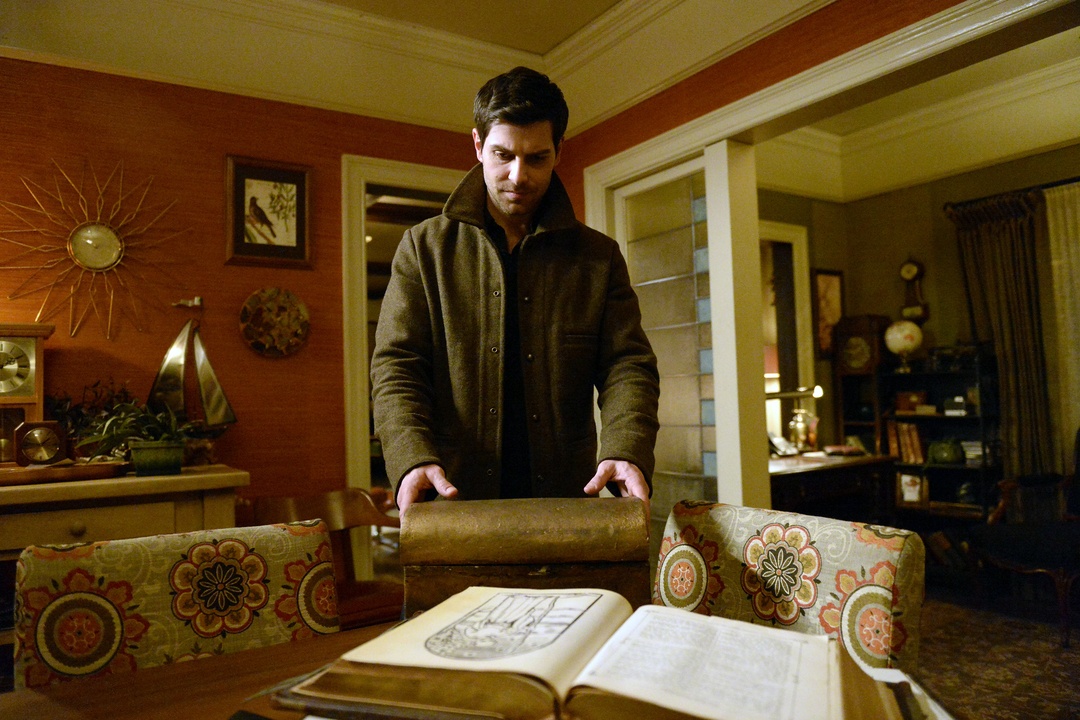 “You shall break them with a rod”

So we’re still in the forest of broken dreams, with Skeletor battling Nick and Eve. And, welp, it aint looking too good for Nick and Eve who are just getting thrown around the garden of Stonehenge like ragdolls.

Back in Portland, Adalind and Renard are trying to figure out how to… I’m not sure what exactly. Maybe get Nick and Eve out? Maybe go in themselves? 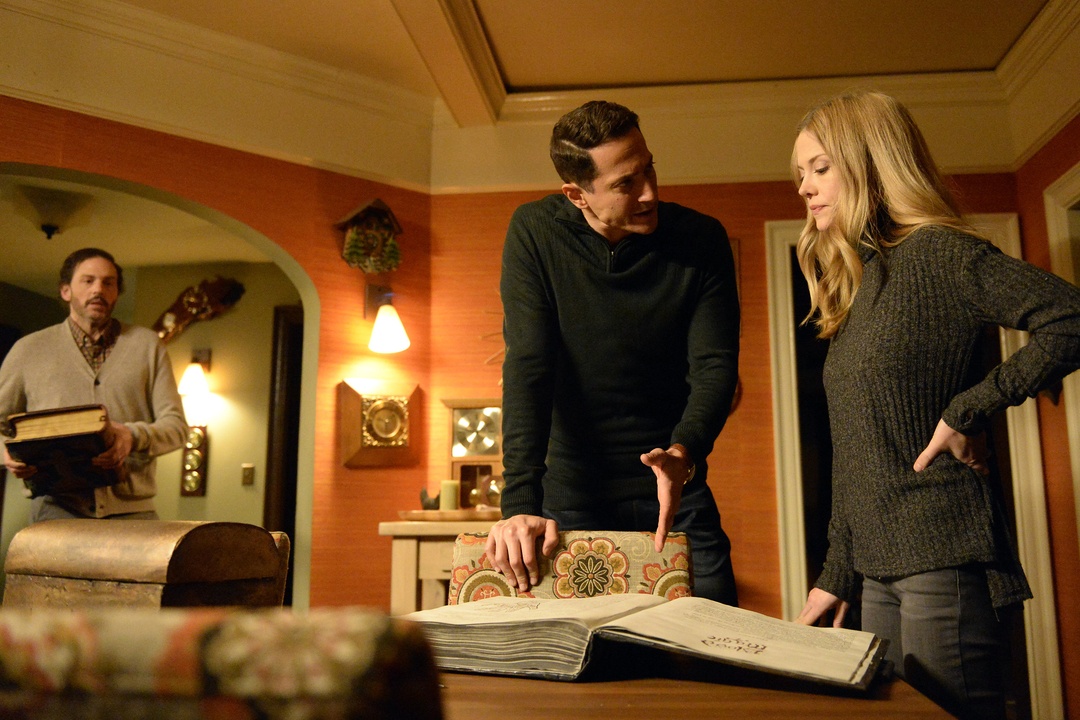 Monroe shows up with his Wesen family bible circa 1598 trying to make sense of “the other place.” He thinks that the hell we think of is actually the other place, which is another plane of existence. And… [he pulls Adalind and Renard away from Diana who is sleeping on the couch], since Diana is probably the Sephat, she might be the literal key to unlocking the door. Of course, Adalind and Renard sing out in unison “Naw, fam.”

Meanwhile, Hank and Wu and Rosalee are in the basement of the shop reading prophecy after prophecy after book after book that all end in Doomsday. They find a prophecy written in some pre-German language. Enter google translate. It seems like Skeletor needed a Grimm to open the portal so he can escape the other place. Which means, his taunting Eve was all a trick and a trap to get Nick which is all a trick and a trap to get out to get Diana. Good thing they didn’t fall for it. Oh. Oh well… then Rosalee realizes that today is the day that the cloth calendar pointed to as official “Shit About to go Down” day. 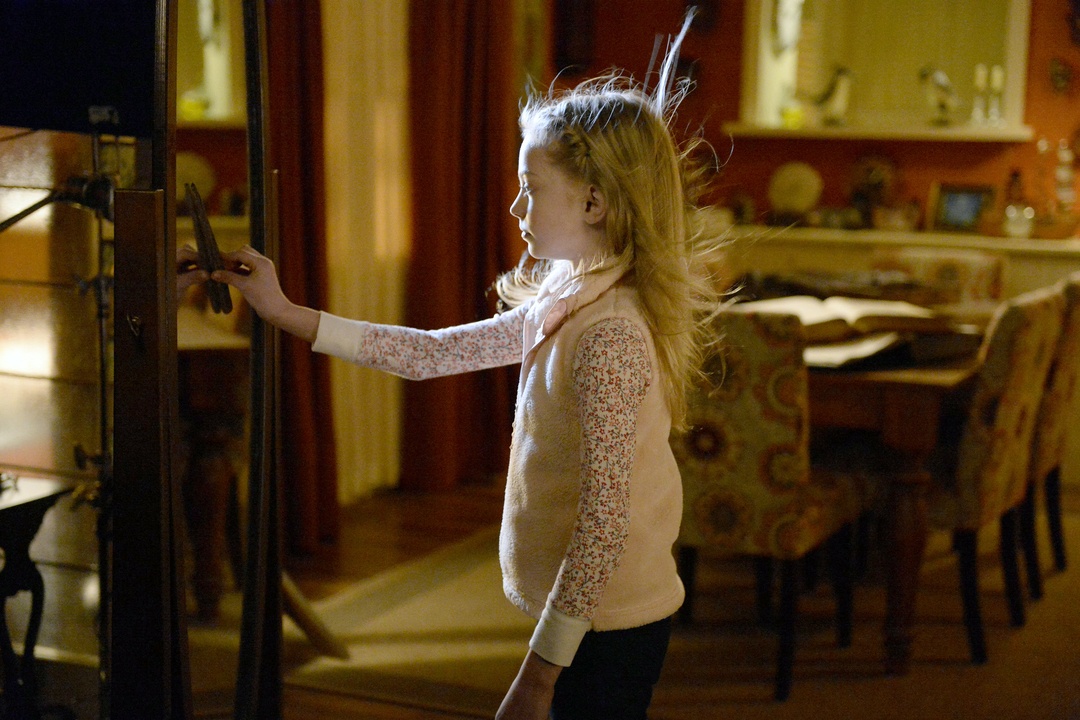 So while Monroe talks to Adalind and Renard about how to get to Nick and Eve, Diana {because you knew her murderous ass wasn’t sleep) is up and walking around. She picks up Nick’s magical stick and touches the mirror with it. See this is what happens when you have no home training. You just touching grown folks’ stuff like you grown. Rosalee calls Monroa and tells him to stop; no portal opening today, but… Diana opens the portal, Nick comes through. Aye! Eve comes through. Aye! 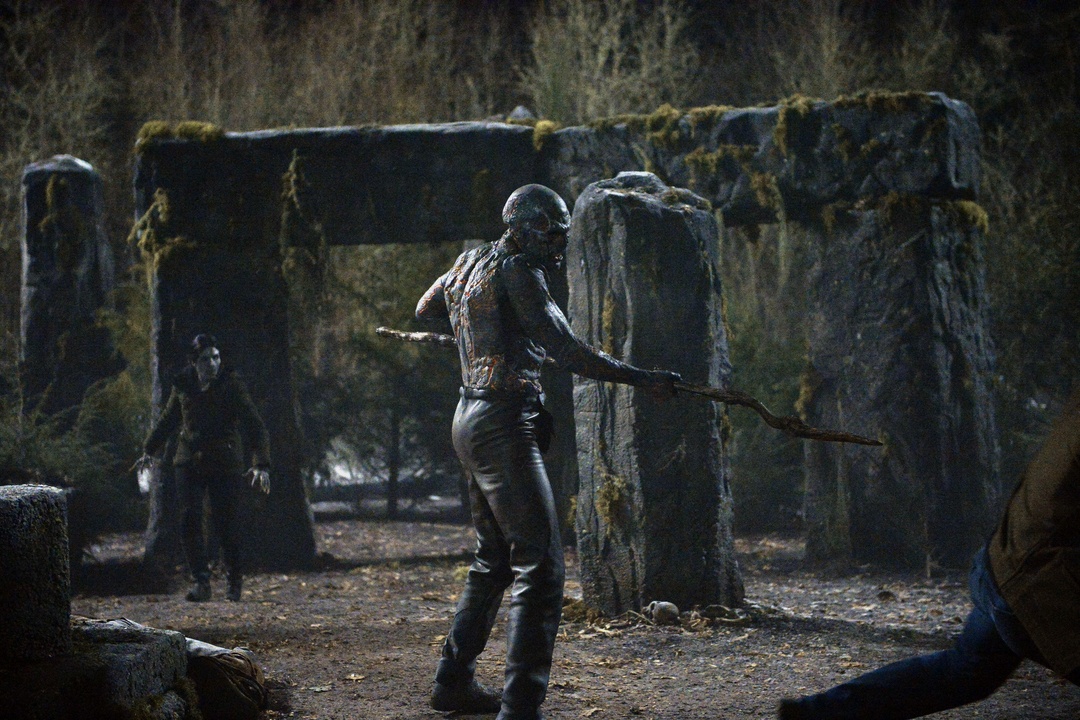 So Nick and Eve come literally flying through the mirror into Monrosalee’s living room, past Adalind, Renard, Diana, and Monroe and land unceremoniously on the floor.

Rosalee, Hank, and Wu show up guns raised ready to do work, but it appears that nothing came through with Nick and Eve. Emphasis on “appears.” Nick’s hands are cut and he uses the stick to heal himself, then he puts the stick back in its box. See? Naw. If I just was in the other place getting my ass beat by Skeletor who might have followed me home, I’m keeping the magical healing stick duct taped to my torso for the foreseeable future.

Rosalee is like “Hate to break it to you, but you got played.” She explains the prophecy, the calendar on the cloth, and the ways in which they all done effed up. But they don’t see him in the living room, so that optimism kicks in: maybe all of these prophecies from centuries ago that seem to be coming true, just… aren’t [upward inflection]

Meanwhile on the other side of town, at a gas station, it starts raining… bats.

Back at Casa de Monrosalee, they are trying to figure out what happened and if this is all fated. Nick and Eve describe the other place and Monroe points out how similar it sounds to the descriptions in his family’s bible. They get into the language they heard while they were there: walking meat (humans), destroyer (Skeletor).

Then Diana, the ruiner that the prophecies predicted, looks at Eve and says “You’re different.” Seems like Eve left part of herself in the other place, the hexenbiest part. And she seems pretty torn up about it [looks longingly at Nick].

Then Diana the killer starts crying on some “He’s coming.” He? You mean the dude YOU let into this realm because you too grown to listen to your parents? Maaaaaaaan, please. 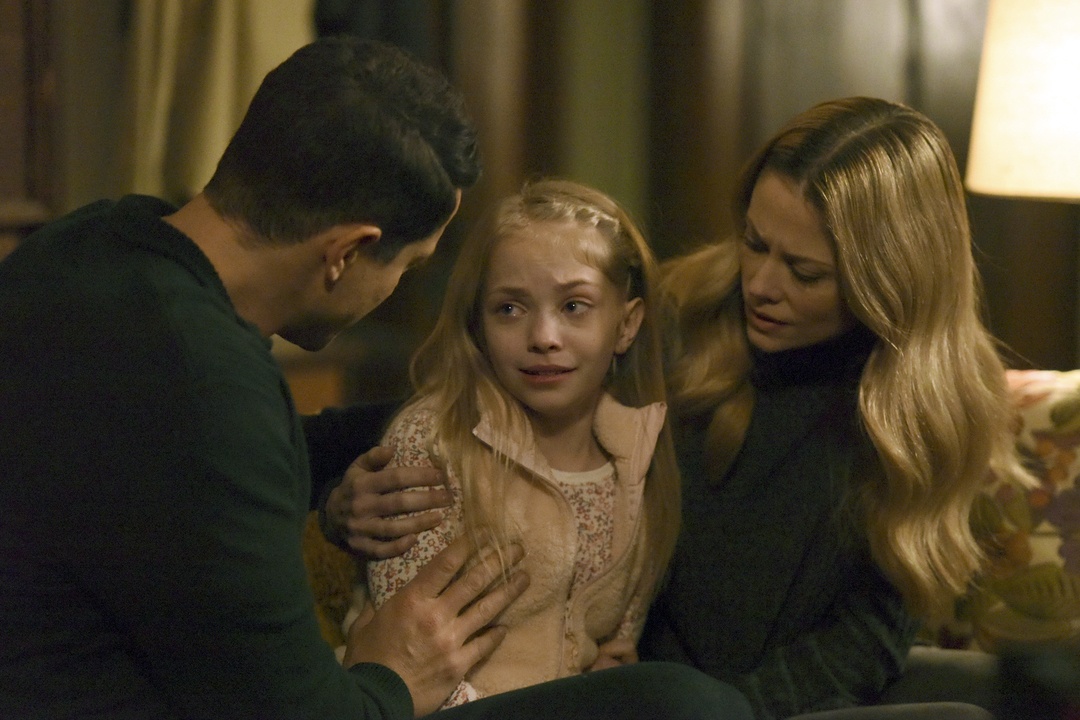 Out of nowhere, we see Trubel in the tunnels at the loft looking in Nick’s secret hiding place for the stick. Suspect. Sus. Pect.

Back at that gas station, Skeletor the Destroyer comes through the dirty bathroom mirror. And he looks like a Ken doll because of course he does. He kills the unluckiest urinate in the world and the gas station attendant. And Diana can feel it. The gang says “we’ll protect you” but she gotta be mad skeptical about that. They’re trying to figure out where to hide Diana. Nick suggest the cabin in the woods (where Monroe took him and where Renard gave him the key.)

Rosalee suggests a spell that can hide Diana. Eve wants to go read up on everything in the books Hank, Wu, and Rosalee read. Hank and Wu head back to the precinct in order to see if any unexplained and violent delights mark the entrance of Ken the Destroyer. Adalind puts Diana to sleep(?) because if an otherworldly demon were coming for me I might need a nap. Renard and Adalind are going to take Diana and Kelly and put a cloaking spell on Diana to hide her from Ken. Nick, as well he should, slips that magic stick into his pocket.

Meanwhile, Ken is just roaming around Portand looking like an angry Abercrombie model.

Nick, Adalind, Renard, and Diana arrive at the cabin. It’s a virtual walk down memory lane as we get flashbacks from the episodes that happened at the cabin (Nick killing a Blutbau, Renard woging in front of Nick for the first time, Nick finding the kidnapped girl that was being kept there).

Nick has to leave because they all think that Ken the Destroyer can sense Nick (and Eve) so he needs to get as far away from Diana (and Kelly) as he can. But not before a few angst-ridden embraces between him and Adalind and a few “I love you”s thrown in for good measure. 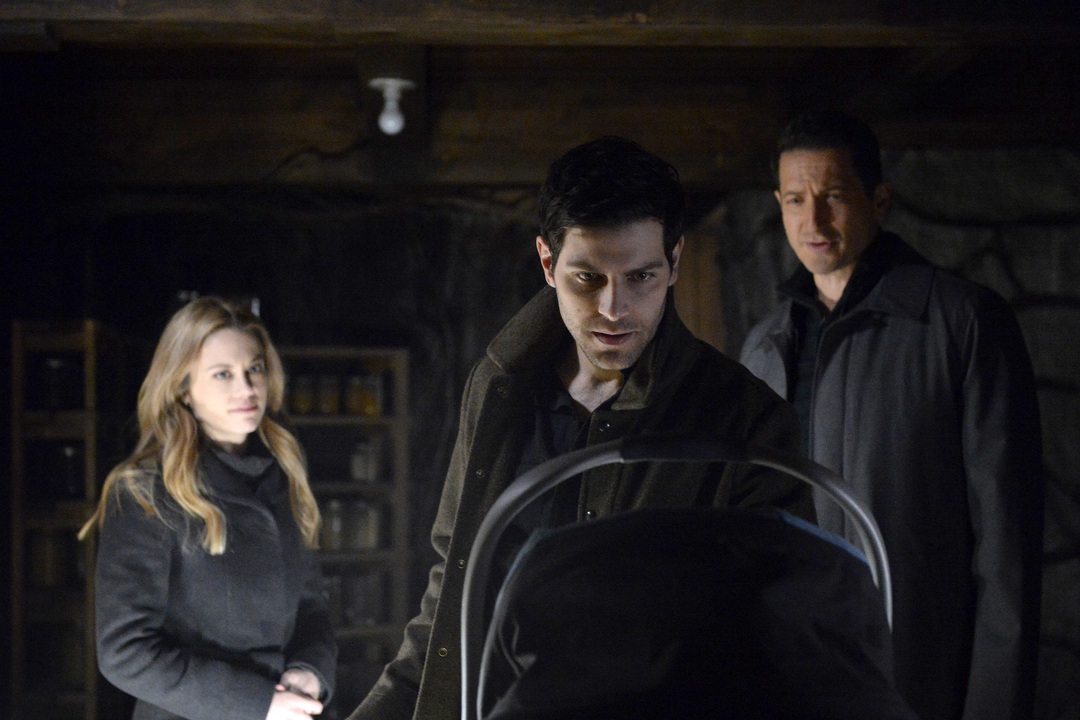 At the precinct, Hank and Wu get a call about two bodies at a gas station and off they go.

At the Spice Shop, Eve, Monroe, and Rosalee are reading the books and Monroe’s family bible. The illustrations look a lot like Skeletor the Destroyer that Nick and Eve saw in the other place up to and including his staff. Which seems to keep showing up throughout history in the bible and in books and in paintings. Hmmmm.

Then they hear something upstairs. Since it could be Ken the Destroyer everyone is on high alert, but it’s Trubel. Cue the “oh god did you miss a lot” conversation.

At the gas station, Hank and Wu are tip toeing around dead bats. In the bathroom, the mirror is blown out so they know what that means. Outside, the body has no clothing (because Ken the Destroyer took them). They call Nick. Once he arrives, all his fears are confirmed. Seems like Ken was here.

In the cabin, Adalind and Renard are trying to put Diana to bed but she’s like “naw, he’s coming, I think I’ll stay up.” Her parents huddle up and make what sounds like a we-die-fighting-because-this-dude-is-going-to-find-us pact. Welp.

Meanwhile, Ken the Destroyer is still walking around Portland… acquiring language skills by imitating people he encounters (and kills). We find out that his staff can become a killer attack snake when he unleashes it on a group of drunk people trying to shake him down for cash.

At the gas station, Nick, Hank, and Wu see the CC camera footage. Now they have pictures of his face, his woged human Ken face. Nick puts out an APB and calls Adalind because they need to know not to answer the door for any traditionally handsome blond dudes.

At the Spice Shop, the gang filled in Trubel and now that she’s up to speed they’re trying to figure out what the staff is and where it came from. It seems like it’s mentioned in all the traditions. All. Uh. Dem.

Monroe finds a story about the staff being broken into 100 pieces so that it’s power is diminished. Then it dawns on them that maybe, just maybe, the stick Nick has on his body is one of those hundred pieces so Ken might want to come for that on the way to pick up his childbride. Eve calls Nick and requests his presence at the Spice Shop, presumably to tell him about the stick’s part in all of this. 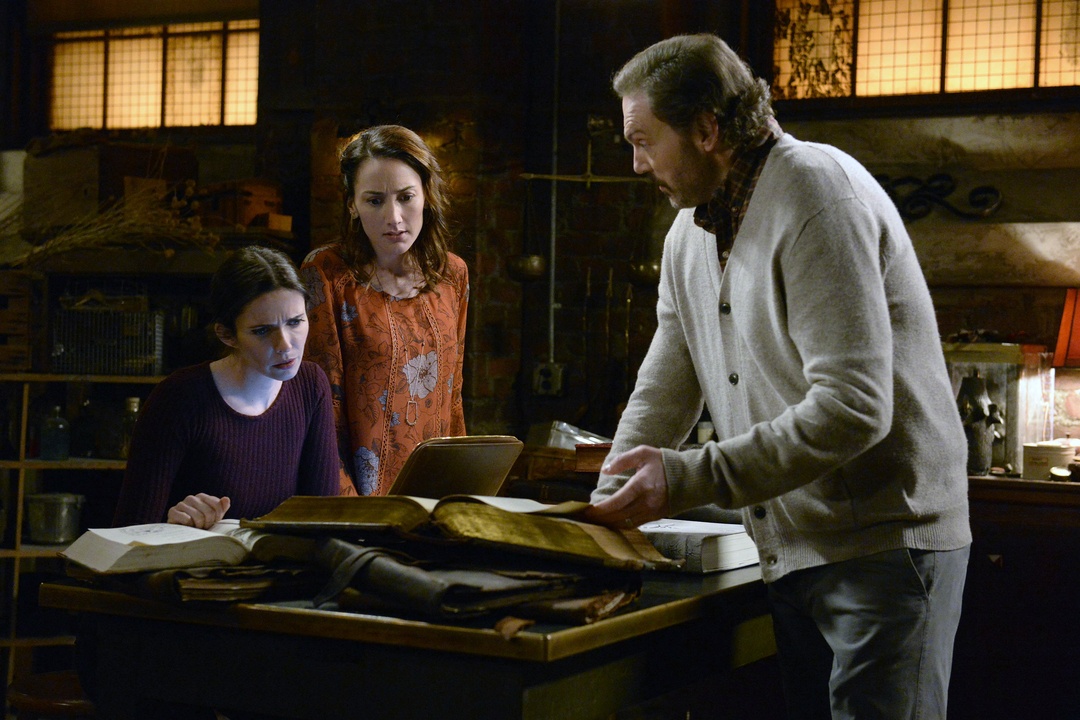 In the cabin, Diana is having a nightmare about Ken because, for real, she’s a kid—a murderous ass kid, but a kid—who is being hunted down and her parents forced her to go to sleep. Anyway. In her dream, Ken shows up and wants Kelly, too. She wakes up screaming and tells her parents who are like oh-god-damn.

Nick shows up to the Spice Shop to be reunited with Trubel and to hear about how digging up the stick that was meticulously hidden might have been a bad idea. Go figure. Nick leaves to go to the precinct. Trubel leaves to go to the place where Ken killed the drunken guy. At the precinct, Hank, Nick, and Wu load up on guns like they’re headed to the Okay Corral, hoping that bullets have a different effect on Ken here than in the other place. 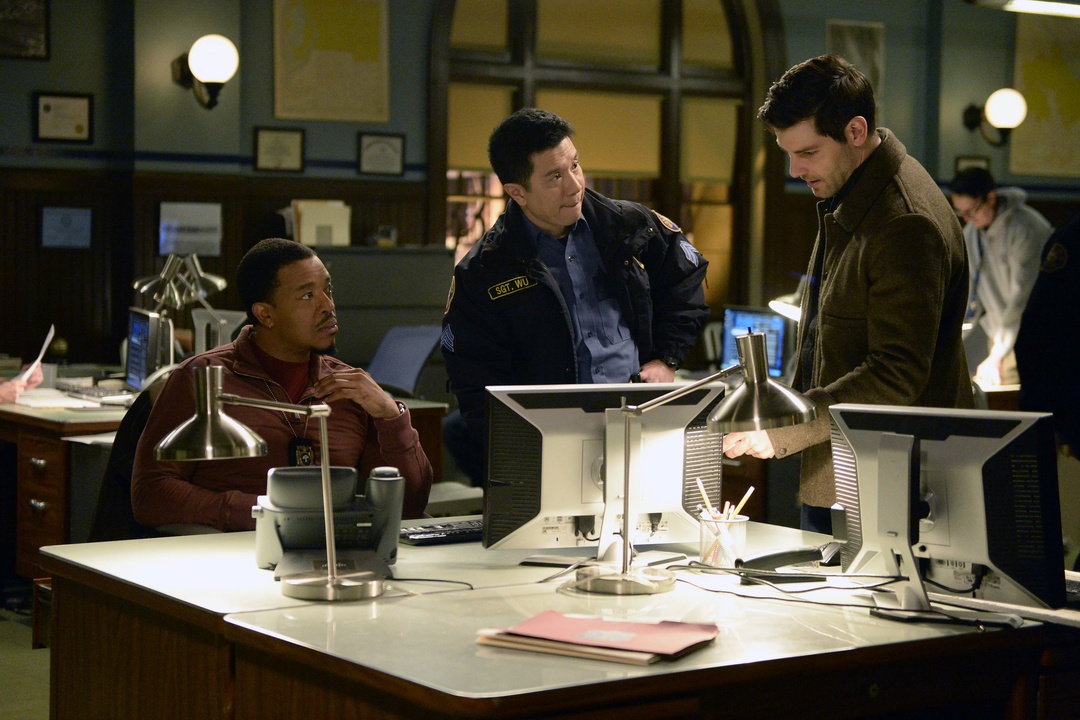 Seems like they’ll have a chance to find out because just as Trubel calls them to tell them that she’s following Ken and that he killed a cop, dude busts into the precinct and just starts wrecking shop.

In the chaos, Wu woges and attacks Ken who impales him with his staff. Wu seemingly dies in Nicks arms. Hank fires at him with a machine gun and meets the same fate. Nick, enraged, charges at Ken but is once again thrown around like a child’s toy.