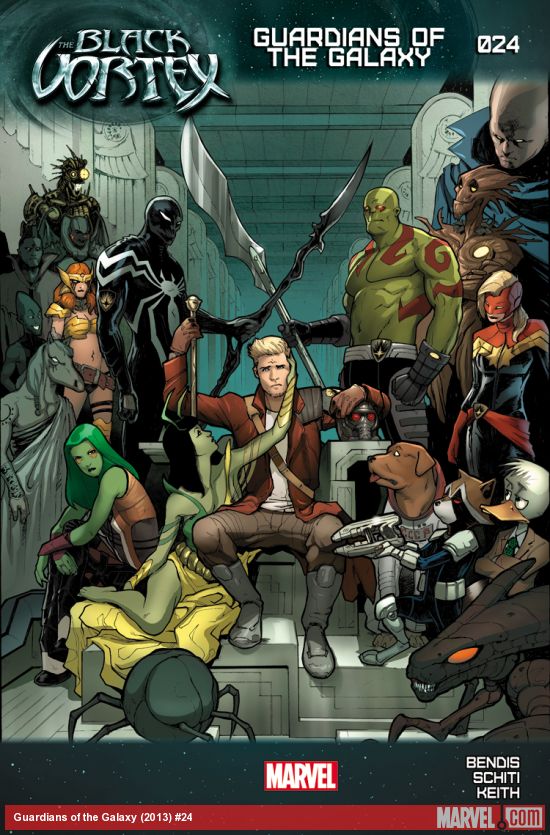 Bendis is not stopping with the world building… or galaxy building I should say. we got the second installment of The Black Vortex Saga that is encompassing the space titles in cross overs. Quill just fucked up his dad’s J-son’s plans to give Thane (son of Thanos) power through the black Vortex (a mirror that imbues a person with cosmic energy). As of this issue we got the Guardians teaming up with the X-men engaging the Slaughter Squad in battle over the Black Vortex. Gamora used the vortex to gain cosmic energy and stepped out as a whole new bad ass muh fucka.

As the gang escapes the conversation then turns to what should be done with the instrument. Should it be destroyed or used? This has everyone split, with some being pro- mirror use and others being pro- “break that shit so we can call it a fucking day”. We see Hank McCoy as the next to use the vortex and it gets all out bedlam from there on as Nova arrives just in time (answering the space distress signal from the team) and bares witness to Gamora taking a drastic measure to show everyone just how dope game this power is.

This is turning into an interesting cross over as this issue serves as the second installment but we are seeing that this is an event with a lot on the line. Again, all the space titles are being involved and this looks like it could be Marvel’s version of the Sinestro Corps War but on a smaller scale. The art is sharp and the writing is on the wall. I’m already ready to see how this even turns out.