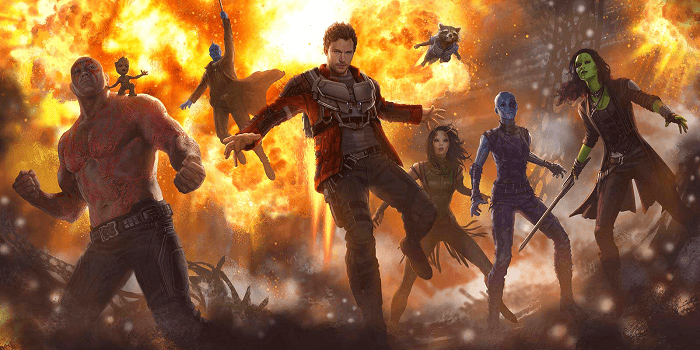 Happy Saturday, y’all! How was your day? What’d you get into?

It don’t matter because the new Guardians of the Galaxy Vol. 2 trailer dropped today and we finna talk about it. This shit droppin’ in May, we droppin this right now. Right. Now. ROLL THE TAPE!

Out the gate we see more action. The team’s established so clearly we get bigger action, bigger baddies, and (some) finished visual effects. Vol. 2 swings in like your bougie auntie that had to stunt on your momma two weeks ago. And is even LESS sorry about it. Apparently, there’s gonna be a team takedown of this sarlacc/sandworm/kraken thing. Sword battles against weird penis monsters with teeth? Bet. Then we get to the good stuff.

So Groot was the MVP of the first movie (don’t debate me go fight your shady auntie) and the best part of the credits. Get treated to more of the Rocket and Groot friendship GOLD right here except now Groot is an adorable, big-eyed tree baby with access to a bomb that could immediately kill everyone. But he’s so CUTE, y’all, and the banter is so much fun. I’mma go ahead and say that this is Bradley Cooper’s best work (don’t @ me). One thing this trailer showed me is that I would sit through a ridiculous number of hours of Rocket, Groot, and Drax trying to save the galaxy. Like butt glued in seat.

We get expanded looks at a bunch of the shot’s from the first trailer, lots of running and jumping and shooting shit and shooting shit while running and jumping. I can dig it. Gamora and Star-Lord are there too with more “will they/won’t they” wangst but Baby Groot tho!!!! He’s so tiny and cute with that itty bitty little voice and he can’t follow directions just like a toddler and he can ride on Rocket’s back like Rocket rode on his all through the first movie and they can be best friends again because Groot isn’t dead and this got me ALL up in my feelings, y’all. And he has his baby berserker mode and throws somebody off of a space catwalk. Awwwwwwwww.

– Who the fuck carries tape with them in a space battle, Rocket? If you ouchea McGuyvering shit you better boy scout it up and come prepared.

– Drax living life turned up to 11 is my favorite thing and I want the movie to be riddled with it. RIDDLED, I SAY!

– Baby Groot, man I expected cute but not this much cute. Somebody buy me some figurines.

– Homegirl telling all of Star-Lord’s business in the serene tones of an empath who has no fucks to give was glorious. Glad to see a woman of color who isn’t an inhuman color and her wig is everything. Everything? Everything. Hopefully, she has more than just this cameo and won’t get disintegrated like Carina. RIP, homie.

So May 2017, again if Black folk are still allowed to go to movies, we in there like swimwear. We seeing you too?