Like many on the left, George W. Bush winning his second presidential term in 2004 against John Kerry was devastating to me. The 2000 election had been a travesty, we thought–the result of a cynical Supreme Court and a bunch of hanging chads in Florida. This time, though, he’d actually won. Despite the constant gaffes and two wars and Dick Cheney lurking menacingly in the background, American voters had chosen him. 9/11 had proven once again that in times of crisis, the American people will rally around the president no matter who that president is. The day after the 2004 election, my then-boyfriend and I wordlessly folded into a protest that marched past my apartment. The day after that, I got a hold of The West Wing’s first season from a friend and was immediately entranced. 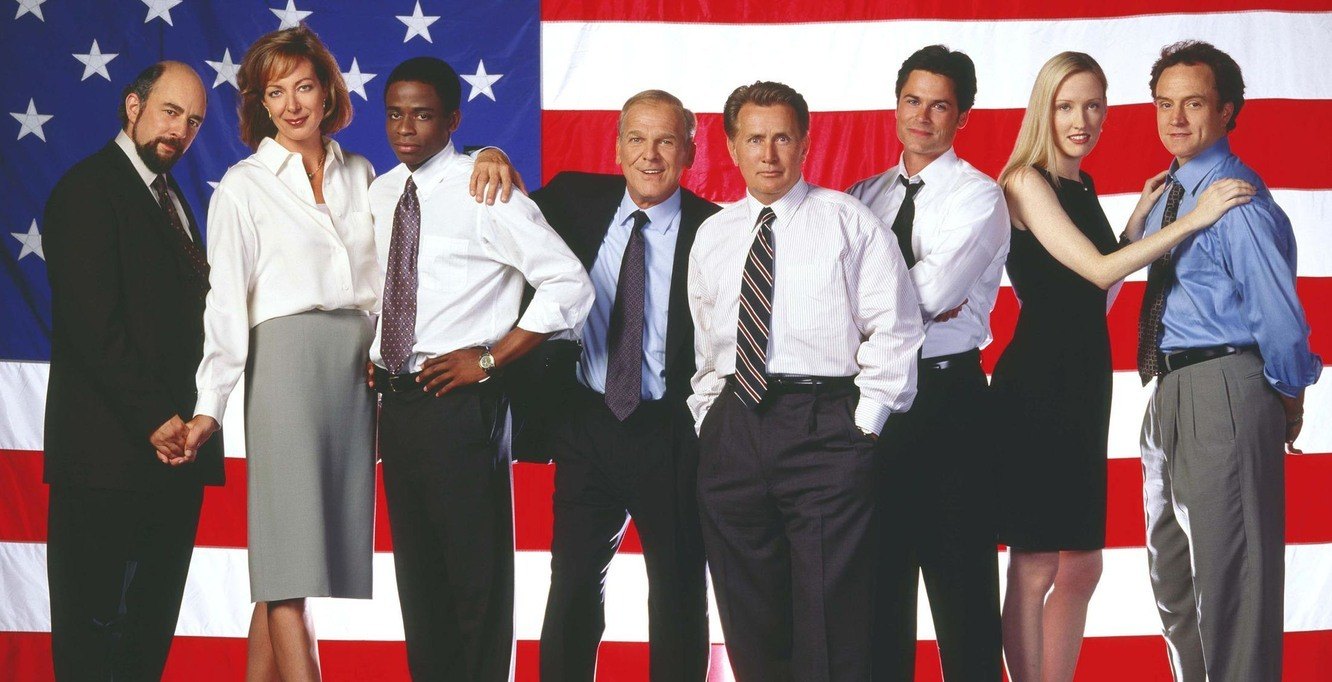 I’d always heard how good the show was, but never got into it. When it first aired in 1999, I watched little television other than Buffy, so this other zeitgeist just passed me by. Now, on the eve of another four years with Bush in office, Aaron Sorkin’s masterpiece was a balm for my soul. The West Wing is not a perfect show, but it’s a damn good one. From the signature snappy dialog to the deeply developed characters, The West Wing excels. And in 2004, it was for me a political escapist fantasy when real politics felt horrifying.

Martin Sheen’s President Josiah “Jed” Bartlet is the Commander-in-Chief we all wanted. (Or at least he was until we found out we could get them in other colors and maybe even other genders). He’s both deeply intellectual and deeply empathetic, witty, warm, and wise. He is also a moral leader, as his Chief of Staff Leo McGarry (played by the late, great John Spencer) calls him in the pilot. Jed Bartlet is not a perfect man–he can be quick to anger. And he spends much of the first season falling into the trap many Democrats are accused of still:  betraying leftist ideology to placate the center. However, this leads to the first season’s volta. Leo, the president’s friend of 40 years, jostles him out of his fugue and steers him back towards the ambitious policy plans he’d brought to the White House.

And that’s the other thing–President Bartlet is arguably the least important character in the production. (He doesn’t even appear onscreen in the first episode until the last five minutes.) No, it’s the other characters, the staff who occupy the hive-like offices that surround the Oval in the West Wing that truly make the show, and the White House, go. The sensational cast–Bradley Whitford, Allison Janney, Richard Schiff, Dulé Hill, Rob Lowe, Elisabeth Moss–embody characters you want surround the the president. When Pres. Bartlet is physically incapacitated at the beginning of the second season, the White House press corps has nothing but questions about who is in charge, but the audience has no such concerns. We trust that the people around him have the country’s best interests at heart. 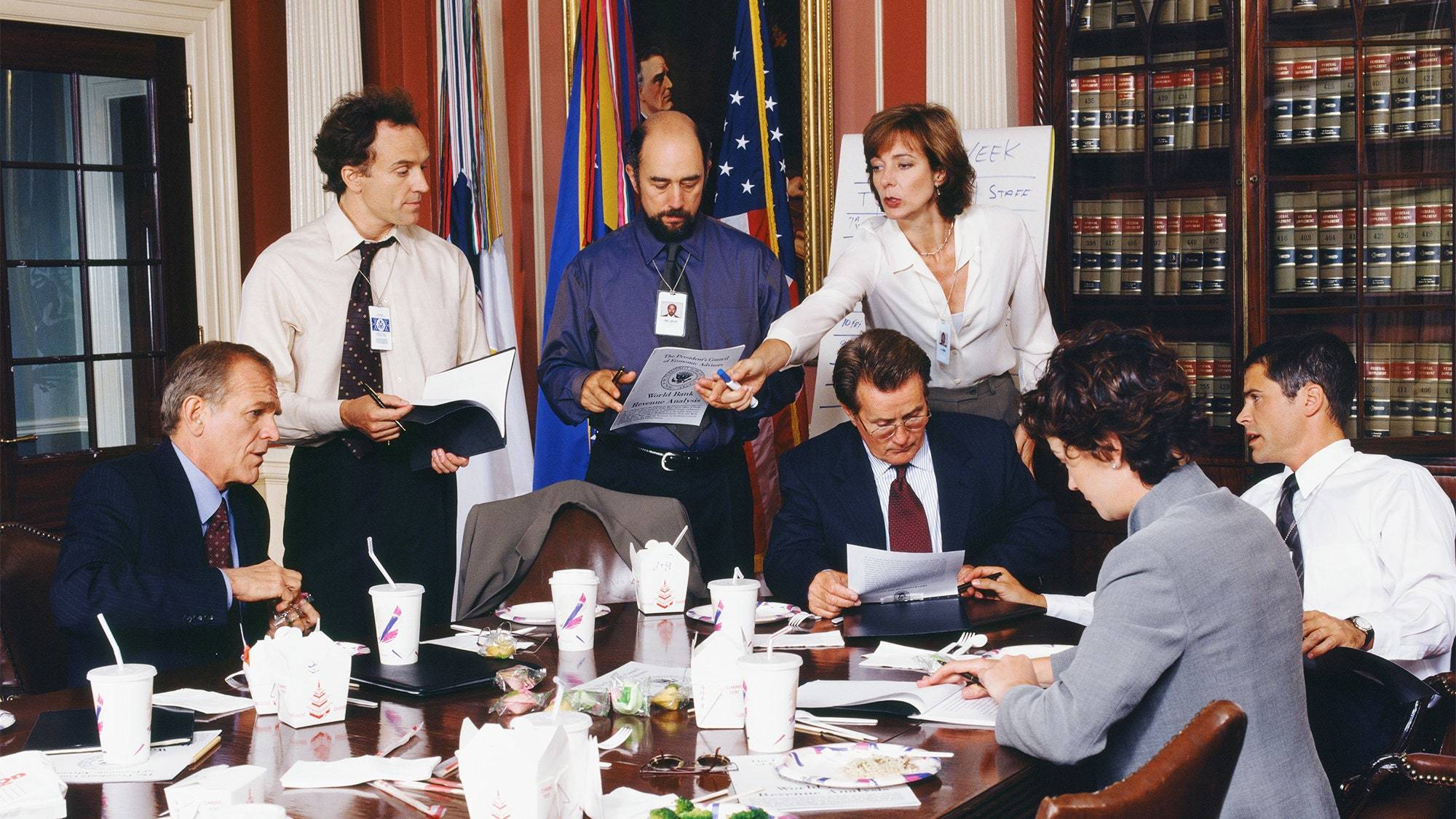 Fast-forward a bit. There have been many shows about political intrigue in the last few years, on the networks, on cable, and on streaming services. But their cynicism became unbearable after the 2016 presidential election. The vicious machinations of House of Cards just wasn’t compelling once the current president took office (and Kevin Spacey’s years of predatory behavior came to light). I know now that VEEP is excellent, but in 2016, I found the venal and moronic characters that peopled its universe especially unappealing. And while I’d enjoyed Olivia Pope’s bathtub-sized goblets of wine on Scandal, the only reason I kept watching was a secret hope that B-613 was real and that Papa Pope would do whatever was needed to “defend the Republic.”

Much as it was unimaginable that 9/11 would happen while George W. Bush was in the White House, we now are confronted with a deadly global pandemic, the likes of which the world hasn’t seen in a century. And the President of the United States of America is a man I wouldn’t trust to successfully put a Band-Aid on a paper cut.

We’re living in the Bad Times for real, and The West Wing has become my happy place.

I’m heading into my seventh week inside my house, grateful that both my partner and I can work from home, even if we’re trapped in here with a five-year-old who just wants to watch the world burn most of the week. No one I know’s first choice to beat the incumbent in November is getting the Democratic nod. I mean, I’m definitely going to turn out to vote for the nominee, whether I have to wear a hazmat suit to do so or not. But just so we’re clear:

All seven seasons of the West Wing are available for streaming on Netflix.