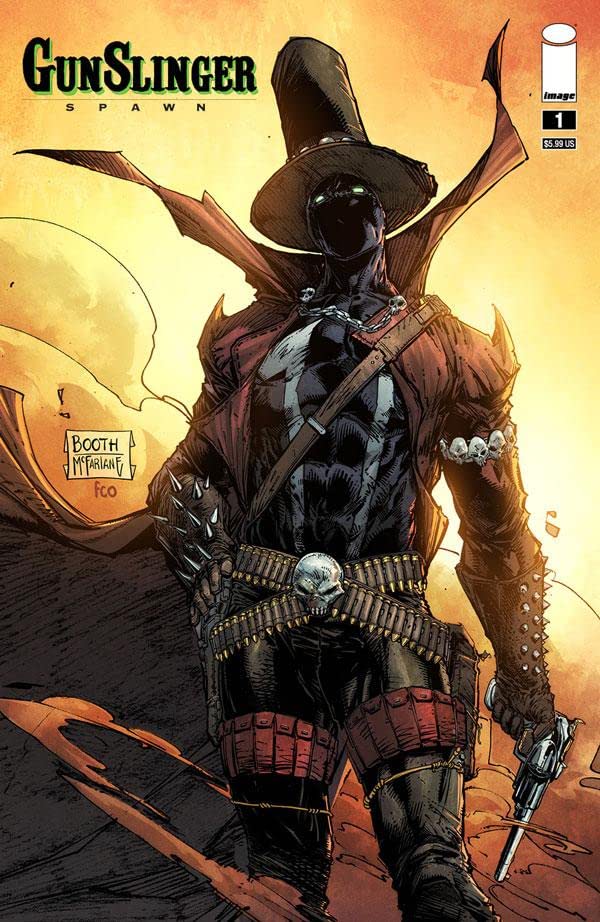 I didn’t know Spawn comics were even still being made. As an elder millennial, the thought of a whole other generation that has been born, graduated high school, gone to college and is eligible to vote in America….having the opportunity to enjoy Spawn made me light up like a Tron helmet. I couldn’t wait to crack Gunslinger Spawn #1.

After opening the aforementioned comic, I realize that there are some things from my childhood that should live on like (in the context of this review) “takesie backsies.” And there are some relics of the 90s that should stay buried in their time capsule like Spawn. All of this to say Gunslinger Spawn #1 is not a good comic book.

To its credit, Issue #1 is a gorgeous comic. Philip Tan has not lost a single step in his obvious channeling of the legendary Todd McFarlane. Tan goes out of his way to dive deep into his extensive tool kit of skills to invoke the best parts of 90s Image books including the attention to detail in every panel. I expected nothing but excellence from the hands/imagination that gave us such gorgeous visuals in Green Lantern and Black Science. So, it goes almost without saying that the book is absolutely beautiful to look at. But after that, very little about Gunslinger Spawn is entertaining…even in the nostalgic way. It’s actually very much a representation of its original generation in the obnoxiousness of the script and unlikeable quality of its characters. Even if you leave out the fact that there are people in this book that say things like “sharted,” the titular character has potential for a Clint Eastwood “Man With No Name” quality, but he just ends up coming off like a bad parody or someone Danny McBride would voice.

There’s a storyline somewhere in this 30-page cacophony of things that don’t work well together, but the only reason I can give you the gist of it is because I recognize it all too well from literally every Spawn comic ever made. People from Heaven, Hell, and some places in between want to kill our hero and he kills them back. It’s essentially Todd McFarlane Presents Ghost Rider and that might actually be a compliment if this story seemed to have something to say. However, the world-building seems so humdrum and hollow that the worthwhile action beats hold little or no weight. Gunslinger Spawn killed an angel and desecrated its corpse as a teachable moment and….I didn’t care. That is the easiest way to sum up this book so far. Things happen and who cares?

Bottom Line: Much like the Spawn franchise as a whole, Gunslinger Spawn #1 is a novel theory/concept but a bizarre execution at best…and a poor attempt at mimicking better stories at worst. Thanks, but no thanks.

6 Michael Jai White appearances out of 10