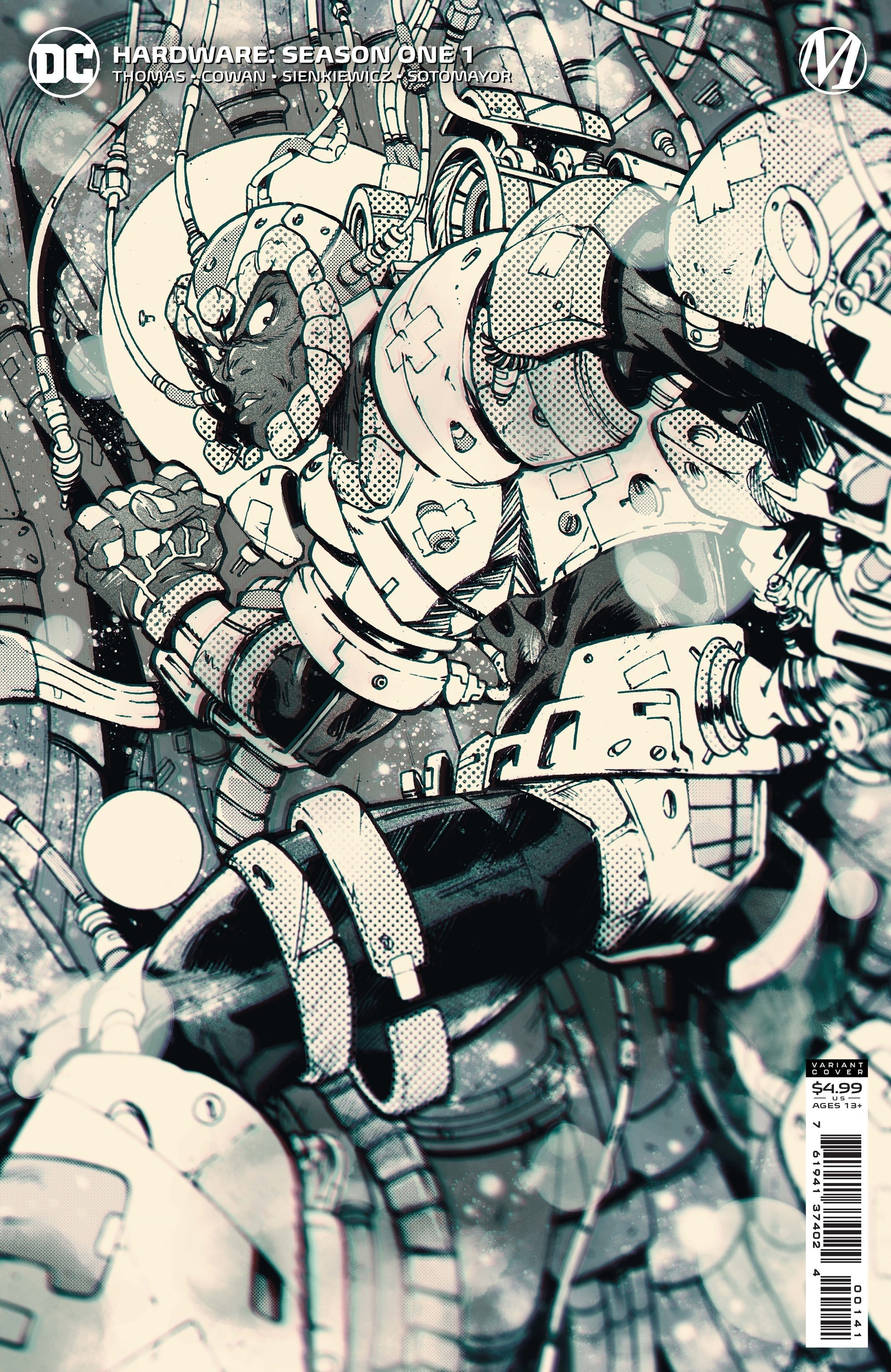 Milestone Comics is back up in this piece and the rollout ain’t stopping any time soon. Season One of Static dropped as the lead leg for this Milestone relay, Icon and Rocket took the baton next, and now it’s Hardware’s turn to run the track. Hardware’s the anchor for this run with Brendon Thomas and Milestone Comics OG Denys Cowan in the wings. We got the chance to talk with Brandon and Denys in a virtual conference about Hardware busting through the door waving the technology for his season one DC debut.

Now, to be clear, Denys Cowan created the Hardware character right alongside Dwayne McDuffie. Denys talked about returning to draw the character and the changes made from then to now.

Denys Cowan: “It has been a bit of an emotional journey revisiting these characters, I said before, I started drawing Hardware and I figured it’d be like riding a bike, I’d just get back on. ‘I can draw Hardware no problem, shit I drew him before. I invented Hardware, I know him back and forth.’ I get the scripts, I start drawing, and realize I have no idea who this guy is, what he looks like these days. I can’t use nineties references because he looked like that in the nineties. It’s 2021 now. Those things have been very interesting. In a way, it’s like doing a whole new book I’m very familiar with. There is no nostalgia, it’s all hard work.”

Speaking of nostalgia, Listen… Y’all may be familiar with Hardware aka Curtis Metcalf and his story from the original run. This ain’t that original run, baby. This time around Curtis Metcalf’s beef with Edwin Alva is on some real Enemy of the State shit. There are some tweaks to the relationship this time around that make a lot of sense but the biggest change is that ‘outside of the law’ feel this book has upon reading it. Hardware is a man on the run, that is, to Edwin Alva; as in, a man on the hunt of Alva’s fade.

Brandon Thomas expands: “This version of Hardware, we’re going to open up the space quite a bit. You’re going to see Hardware and that awesome suit of armor in a lot of locales that you have not seen before. This is not a story that’s exclusively in Dakota. There’s a part of the story that has us go outside of Dakota. Denys knows, I specifically chose where Curtis goes specifically because I wanna see Denys draw Hardware flying past these specific types of landmarks, for him and the character that I think people will be really excited about.”

Denys Cowan: “Now [that] I’m thinking about it, it’s like really seeing Black people and superheroes in spaces that you aren’t used to seeing them in. That’s the real appeal of this… I wanted it to be that Hardware movie that you didn’t know you needed. From the way it opened up to the way it ended, I wanted it to be a relentless ride. That you couldn’t wait to see ‘what the fuck is happening next’ and I think we succeeded.”

Keep in mind, there are some things being done differently for Hardware this time around as well. Just because certain elements of Hardware worked one way in his original series run, doesn’t mean that status quo will be kept for this run.

Brandon Thomas: For me, the conflict between Curts and Alva had to be very personal, it had to be very emotional. (laughs) This for every black person that ever had this white friend, and coolest white friend anybody ever had for so long, then something happened and you get to the point where it’s like “what the fuck?! This is what you been on?” It was very important to me that Alva had to be like, ‘Are you serious? I made you. I made Curtis Metcalf. You wouldn’t be Curtis Metcalf without me and you got the nerve to ask me for some extra shit?’. For that relationship to have full connection and full meaning, they have to know each other. As a by-product of that, Alva has to know he is Hardware.

*Slamming my fist on the table* That’s what the hell I’m talking about. We wanted Milestone Comics back for so long and done right with the proper resources. Having read the first issue of Hardware I can assure you, that real and the trill is here. Not just for this character, but for the whole of Milestone Comics. Hardware Season One #1 drops on August 10, 2021